Where are they now? The Aston Villa XI beaten in the League Cup by Bradford 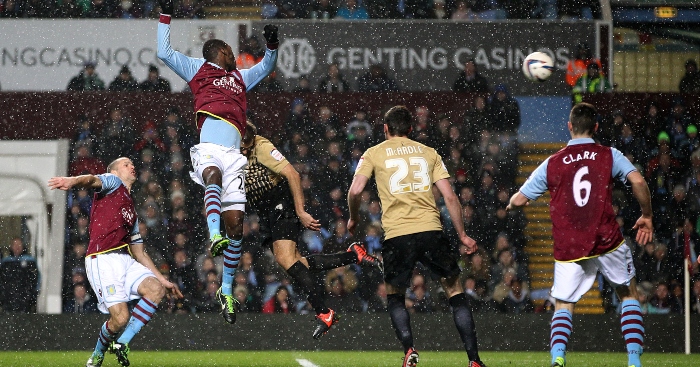 Back in 2013, Aston Villa just had to beat a third-tier team over two legs to make the League Cup final. Somehow, they failed in their task.

Bradford City stunned Paul Lambert’s side with a 3-1 win at Valley Parade, but the Premier League side still ought to have had enough to recover back at home – after all, this was a squad that had won at Anfield in the league and beaten Manchester City and Norwich en route to the semis.

It wasn’t even an especially weak Villa line-up, either. Here’s who was involved for the second leg, where James Hanson’s second-half goal proved vital as Bradford clung on for a 4-3 aggregate victory.

Given characterised the blend in Paul Lambert’s squad between inexperience and too much experience, having joined Villa from Manchester City as a 35-year-old in 2011.

The Irishman was Villa’s cup keeper in 2012-13, playing only three more league games for the club before leaving for Stoke in 2015, and had little chance with Hanson’s powerful header.

After retiring in 2018, the Irishman joined Derby County’s coaching staff and remains at the club to this day.

Lowton was still in his first Villa season when this game rolled around, having joined from a then third-tier Sheffield United.

The right-back missed just one game in the league, scoring a goal of the season contender against Stoke.

He made the switch to Burnley in 2015, helping them return to the Premier League in his first season and quietly racking up close to 100 top-flight games for the Clarets.

Villa’s captain at Bradford, Vlaar was still on the club’s books when he played for the Netherlands at the 2014 World Cup in Brazil.

Injuries limited the Dutchman in his final season in England, and he moved back home to join AZ Alkmaar during Tim Sherwood’s tenure at Villa Park.

Vlaar is still going at the age of 34, which will come as a bit of a surprise to those who assumed he was 34 when he was still at Villa, and he played for AZ against Manchester United in this season’s Europa League.

After graduating from Villa’s academy, Clark had worked himself up to the position of first-team regular when Lambert took over.

The centre-back, who had switched his international allegiances from England to Ireland by 2013, played more than 150 games for Villa before joining fellow newly-relegated side Newcastle United in 2016.

Clark is still at St James’ Park, where he’s flourishing under Steve Bruce and even chipping in with goals these days.

Highly-rated England Under-21 left-back Bennett joined from Middlesbrough in 2012 and played 30 games in his first season before losing his place to Antonio Luna and loanee Ryan Bertrand in 2013-14.

He was withdrawn for Weimann against Bradford, with the Austrian forward scoring late on to add to his goal in the first-leg defeat.

After a couple of loan spells away from Villa Park, Bennett joined Cardiff City in 2016 and was part of the Bluebirds squad relegated from the Premier League last season. Weimann, meanwhile, has been at Bristol City since 2018.

Another academy graduate, Bannan played in more than half of Villa’s games in 2012-13 but left for Crystal Palace at the end of the season.

After struggling for consistency in London, amid a number of managerial changes, the Scottish midfielder joined Sheffield Wednesday in 2015 and played his 150th game for the Owls this season.

His replacement against Bradford was Darren Bent, out of favour and set for a loan to Fulham the following season. Bent retired at the end of last season after a spell in the second tier with Derby County.

One of Villa’s biggest young stars in the Lambert era, building on his impressive form as a teenager for Leeds and becoming a midfield regular under the Scottish manager.

Delph earned the Villa armband before eventually leaving for Manchester City in less than optimal circumstances in 2015, but he probably won’t have regretted his move to the Etihad.

Injuries have hampered his start to life at Everton, who he joined for £8.5million over the summer.

The Bradford game was Ireland’s last in a Villa shirt, with the former Manchester City midfielder falling out with Lambert and losing his place in the squad.

He joined Stoke, initially on a season-long loan and eventually on a permanent basis, and stayed with the Potters until their 2018 relegation from the Premier League.

The Irishman joined Bolton Wanderers on a short-term deal last season but left without playing a game and recently told The Athletic he was willing to play for free to get back into the game.

N’Zogbia cost Villa £9.5million from Wigan in 2011 and got off to a decent enough start before things quickly went south.

An Achilles injury picked up shortly after the Bradford game kept the French winger out for the entire 2013-14 season, and he was never really the same after his return.

N’Zogbia left Villa after their relegation in 2016 and was forced to retire at the age of 30 after heart issues put paid to a move back to France.

Agbonlahor went from being a hometown hero at Villa to overstaying his welcome, at least in the eyes of some fans, but in 2013 he was still in receipt of enough goodwill.

The Birmingham-born striker scored 12 goals in the 2012-13 season but only managed 13 in the next five seasons combined.

He failed to find a new club after leaving Villa in 2018 and retired a few months later, having essentially played out his career as a one-club man.

A summer signing from Genk, Benteke top-scored for Villa in all three of his seasons.

He netted the opener against Bradford, one of 23 goals that campaign, and the loss of the Belgian to Liverpool in 2015 was soon followed by relegation for Villa.

The striker lost his scoring touch after an impressive first season at Crystal Palace in 2016-17 and has scored just four goals in his last two and a half Premier League seasons.