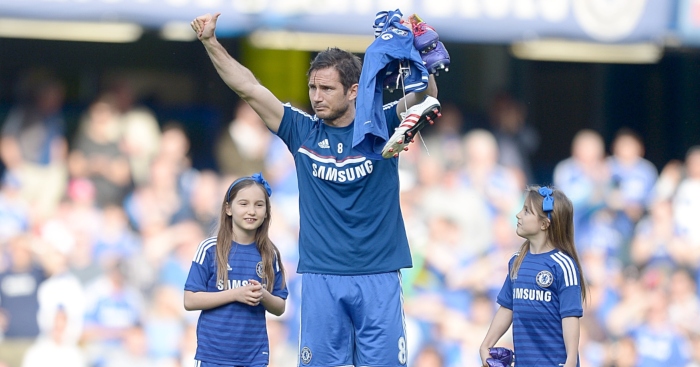 A lot has changed at Chelsea since Frank Lampard last played for the club, some good and some bad.

The former midfielder is the Blues’ third different permanent manager since José Mourinho, under whom he played his final minutes for the West London side, while there was also that stint with Guus Hiddink back in as caretaker and the likes of Alex Pato and Bertrand Traoré getting game-time.

There’s been plenty of upheaval on the pitch, too, as evidenced by the rest of the XI who took to the field with Lampard for his farewell appearance against Norwich City in 2014.

Schwarzer was already in his 40s when he joined Chelsea, but he still had time to ‘win’ back-to-back Premier League titles, becoming the first player to ever do so with different clubs.

He retired in 2016 after being in the city and sometimes even in the stadium as Leicester won the title.

The Australian international has returned home to work as a pundit, recently covering the Women’s World Cup for Optus Sport.

Ivanović still felt indispensable to Chelsea in 2014, but his star had begun to fall by the time Antonio Conte took over as manager, and he only made it a few months into the Italian’s reign before being shipped off to Zenit.

The Serb won his first Russian League title in 2019, 12 years after picking up his first silverware in the country when Lokomotiv Moscow won the domestic cup.

His team-mates in Saint Petersburg include another former Blue in veteran left-back Yuri Zhirkov.

Cahill was still a Chelsea player in 2019, but he played just 22 league minutes under Maurizio Sarri.

At 33 and with more than 60 England caps to his name, he ought to have no trouble finding a new club but is still unattached at the time of writing.

I mean, you already know about the captaincy, the 700+ games and the bizarre 26th-minute standing ovation in his final game.

You also remember the season at Aston Villa, and the WhatsApp announcement when he joined.

Now an assistant to Villa boss Dean Smith, which you also knew.

Scored his first FA Cup goal in 2019, which was good going for a player who most people thought had retired in 2017.

After actually calling it quits, he recently linked up with Chelsea on their pre-season tour of Japan in what appeared to be an ambassadorial role.

Still, having seen the England international end his career playing under Lampard at Derby, we wouldn’t be all that surprised to see him eventually take on a role as part of his former team-mate’s coaching staff.

Matić was only a few months into his second Chelsea stint at this stage, but he stuck around for another three years and won two titles in that time.

Was reunited with Mourinho at Manchester United, ensuring he would outlast the manager at two successive clubs.

Now in charge of Chelsea. Which is the point of this entire piece.

Not only was the Norwich game Lampard’s last for Chelsea, it was also Salah’s last inclusion in a Premier League starting line-up for the Blues.

The Egyptian made three substitute appearances the following season, also starting cup games against Bolton, Shrewsbury, Sporting CP and Bradford in 2014-15 before being allowed to leave, first on loan and then permanently.

Probably a mistake, that.

Still at Chelsea, remarkably, and now their new No.10.

Who’d have guessed he’d be the one survivor from that starting XI?

Like Salah, Schürrle briefly stuck around in the 2014-15 season, even making time to get on the end of a stunning Cesc Fàbregas assist against Burnley.

Rather inexplicably, considering the make-up of the rest of the squad, he remains a Borussia Dortmund player after a two-year loan at Fulham was cut short following the Cottagers’ relegation.

This would be Ba’s final Chelsea appearance, a week after his goal at Anfield denied Liverpool the Premier League title.

The Senegal striker left for Beşiktaş that summer, and he’s divided his last five years between Turkey and China.

71 goals in 117 games since leaving Stamford Bridge isn’t too shabby at all.