Where are they now? First winners of Chelsea’s five straight FA Youth Cups 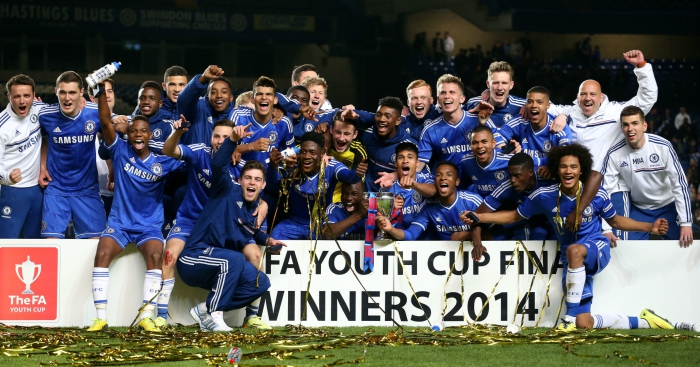 Chelsea won the FA Youth Cup for the fifth time in a row in 2018 with a 7-1 aggregate win over Arsenal in the final.

The under-18 competition is run annually but has been dominated in recent years by the Blues, who have made seven successive finals and lifted the trophy in seven of the last nine years.

We’ve taken a look back to the first team of the current consecutive winning run to see how far the players have progressed five years on from the win.

Son of former Leeds goalkeeper and current Chelsea coach Mark, Beeney is one of six goalkeepers currently on loan elsewhere from the Blues.

Having spent spells as Chelsea’s third-choice goalkeeper, he has also enjoyed time on loan at Newport and Crawley, before joining Irish side Sligo Rovers in February.

Currently on loan at Vitesse, Dabo earned some level of viral fame when he scored a sensational own goal against Gronigen, which echoed Lee Dixon’s but was even more outrageous.

Team-mate and fellow loanee Mason Mount recently won the Player of the Year award for the club, who have secured at least a seventh-placed finish in the Eredivisie with one game remaining.

A significant success story of Chelsea’s loan policy, Christensen returned from a two-year loan at Borussia Monchengladbach last summer and made a seamless transition into the first team.

He made 62 Bundesliga appearances in the two seasons, and has gone on to feature 25 times in the Premier League as part of Chelsea’s back three this term.

After making mistakes against Barcelona and both Manchester clubs in March, the Dane revealed he sought out advice from former captain John Terry, who told him mistakes are natural.

“He tried to put it in perspective for me,” he said. “He told me that if a forward misses a chance, he can make it good again by scoring when he gets the next opportunity.

“But we can’t change a goal scored against us, so when we make mistakes it is more crucial and it is easy for people to point fingers.”

Clarke-Salter’s brief loan spell at Sunderland has ended in a second successive relegation for the side.

The defender, who captained England to the Under-20 World Cup last summer, was sent off in successive games for the Black Cats, resulting in a total of seven games missed.

Full-back Aina is also on loan in the Championship, and during his time with Hull City he has switched international allegiances, making bow for Nigeria this season, and he could line up against England at Wembley as both nations prepare for the World Cup.

Dasilva has spent the last 18 months on loan at Charlton, after being labelled “better than any Premier League left-back” by Ian Wright in 2015.

Captain of the England Under-19 side who won the European Championships in 2017, the trio of Dasilva brothers all joined Chelsea from Luton in 2012 – aged 13 and 12 (Cole and Rio are twins) – for a five-figure sum.

Houghton has been at Doncaster Rovers on a temporary basis for the last two seasons.

Darren Ferguson’s men had agreed a deal to bring Houghton to the Keepmoat Stadium on a permanent basis, but the player and the club could not agree personal terms in January, so they simply extended his loan instead.

The midfielder scored the second goal for Chelsea in the final against Fulham, which put them in front on the night after Moussa Dembele, now at Celtic, had opened the scoring.

Loftus-Cheek is back on the field for Crystal Palace after a prolonged injury lay-off, looking to stake a late claim for a place in the England World Cup squad, after making his international debut earlier this season.

Brown joined Palmer at Huddersfield for the second half of last season, scoring five goals and coming very close to a permanent move in the summer.

“Whatever happens next season, I always will love Huddersfield,” he said before the play-off final. He subsequently joined Brighton on loan in July but ruptured his ACL in January, ruling him out for the season.

Talented midfielder Colkett has spent time on loan at Bristol Rovers, Swindon Town and Vitesse since the start of last season, though he was recalled from the latter in January after just six league appearances.

“Charlie has incredible talent,” Swindon boss Luke Williams said after his impressive season in League One. “He is going to become a real success at Chelsea.”

He got the ball rolling against Fulham, scoring from the penalty spot minutes before Houghton added a second.

After impressing for Huddersfield in their promotion-winning campaign last season, Palmer rejoined David Wagner’s men at the start of the season, though he made just a handful of appearances before switching back to the Championship with Derby in January.

The final would prove to be one of Ssewankambo’s last appearances for Chelsea, as he left the Blues at the end of the season to return to Sweden, where he is currently on loan from Molde at Malmo.

He scored Chelsea’s third of the night to pull them back into contention with 13 minutes to play, with the score at 5-6 on aggregate.

Solanke bagged the two winning goals in the last 10 minutes – including a 91st minute winner – to earn Chelsea the trophy against Fulham.

The Under-20 World Cup winner left Chelsea upon the expiry of his contract last summer, joining Liverpool after just one first-team appearance for the Blues.

There was fear, though, that the striker’s full England debut in November could hike up a still-to-be-decided tribunal fee for the teenager, who is yet to score in 24 games for Liverpool.

Musonda had two six-month loan spells at Real Betis in 2016, before manager Antonio Conte had to speak out against claims he would be leaving the club, with Roma rumoured to be interested in the winger.

He stayed at Chelsea, making his debut in the 2017 Community Shield before scoring on his first start, during an EFL Cup tie against Nottingham Forest.

Musonda joined Celtic on an 18-month loan deal in January, but his new club has infuriated Chelsea supporters after limiting the pacey left-sider to just four appearances.

The logic of Chelsea’s transfer policy: 11 fringe men the Blues sold at a profit