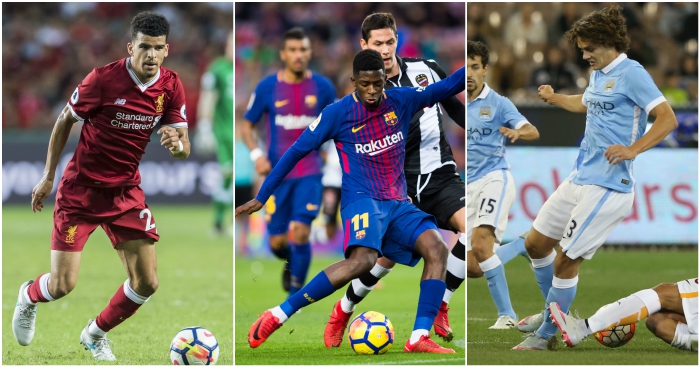 Former Arsenal, Chelsea, Liverpool and Manchester United targets made it to The Guardian’s ‘Next Generation 2014’ list – but have they lived up to the billing?

Each year since 2014, the Guardian has picked a host of players who were born 17 years ago, starting with the class of 1997.

We’ve taken a look back at their choice of the 40 best young talents in world football from 2014 to see just how right they were.

Vadala remains at Boca and has scored once in three first-team appearances, spending last season on loan at Union de Santa Fe and the previous season at Juventus as part of the deal which saw Carlos Tevez move in the opposite direction.

Roma reportedly fended off interest from Manchester United to sign the youngster at the end of the 2014-15 season.

But he ended up joining Dutch club Roda on a two-year-loan before signing permanently with Central Coast Mariners, where he has played 19 times so far this season.

Now 20, Tielemans made a 185 appearances in all competitions for Anderlecht before 18 goals and 12 assists last term saw Monaco fork out €25million for the exciting prospect, who has already earned eight caps for Belgium.

Having played a key role in Corinthians’ 2015 title win, Malcom earned a move to Bordeaux, where he has made 85 appearances in just over two years. The attacker almost joined Arsenal in January and is also being linked with Bayern Munich.

Also earning a European move in January 2016 was attacking midfielder Gerson, who is now becoming a more regular feature in Roma’s matchday squads.

Scouted by Hristo Stoichkov as a junior, Kraev so nearly moved to Barcelona’s famous La Masia academy, with the former Bulgaria hero heaping praise on the young Bulgarian.

Now a full international, he scored 27 times in 94 appearances for Levski Sofia before joining Midtjylland in Denmark for €500,000 last summer but has played just 169 minutes in the league so far.

There were very high hopes for the youngster, but he finds himself still kicking around in the background at the side who have won the Chinese Super League for the last seven years in a row.

Sanchez was breaking into Cali first team when he ruptured his ACL in 2015 and has never really fully recovered, failing to work his way back into contention despite a spell away on loan last term.

Still in Zagreb despite a reported bid from Liverpool last summer. A few attitude problems have stinted Coric’s development. He did, however, go to Euro 2016 as part of the Croatia squad, and has won two full caps for the international side.

Having made 120 appearances for Split, the winger earned a £10million move to Everton in the summer – the highest fee his former club have ever received.

He made his international debut before moving to Merseyside and scoring on his Everton debut in the Europa League, going on to make nine Premier League appearances so far this term.

The midfielder has scored exactly one goal in every four games for the Danish club, where he was described as “Christian Eriksen with an ego” as a youngster.

After leaving Chelsea for Liverpool in the summer, Solanke is yet to score in 21 appearances for the Reds.

The mdifielder has since made 55 league appearances and was shortlisted for the Football League’s Young Player of the Year for 2016/17.

Papers reporting Ryan Ledson has handed in a transfer request at Oxford.
Things could get interesting in the run up to Wednesday's deadline.#PNEFC could certainly do with another combative midfielder who's competent further forward. pic.twitter.com/Q0UdkTArqr

The current third most expensive player in history having moved from Borussia Dortmund to Barcelona for €105million in the summer. We’ll give The Guardian this one.

Augustin made a handful of first-team appearances before PSG signed Neymar and Kylian Mbappe, resulting in the youngster being shipped out to RB Leipzig, where he has bagged six goals in 19 appearances so far this season.

Became the club’s third youngest scorer – behind Samir Nasri and Andre Ayew – earlier this season, and has in fact been likened to Nasri in his style of play.

He is becoming a more regular fixture in the Marseille line-up, making 47 appearances since the start of last season.

Another enticing performance from the 20-year-old. Maxime's form has cooled down after a breakout 2016/17, but he's been pivotal to Marseille's Europa campaign, and he proved it against Los Leones. pic.twitter.com/nOfa7EFfyG

Three caps for the German national team and a regular in the Leverkusen side, Henrichs has been linked with Bayern Munich and is viewed as a potential long-term replacement for Phillip Lahm.

The centre-back is yet to break into Hoffenheim’s first-team but has made a number of appearances in the second tier this season on loan at Karlsruher and Jahn Regensburg.

The Greek striker tried his best to move to Italy when he rejected a new contract at Panathanaikos, but he now plays for Panionios on loan from PAOK, where he has scored five goals so far this season.

The big forward has disappointed so far, scoring just two goals in 25 appearances on loan at boyhood club Brescia last season. He moved to Sampdoria in 2015, and is currently on loan at SPAL.

in case you missed it, Federico Bonazzoli scored the first goal of his senior career on Saturday. and what a goal. pic.twitter.com/ZA1XaeK4B1

Still progressing through the Japanese international youth sides, Sakai has failed to break into the Trinita first-team, spending time on loan in Belgium this season with Tubize. He is now on loan at Albirex Niigata back in his home country.

Joining Pachuca in 2016, Aguirre won the CONCACAF Champions League with the club in April, and after featuring as a regular at former club Morelia too, he has plenty of experience in the Mexican top flight.

An utterly tragic tale. Nouri was ready to break into the Ajax first-team ahead of the current campaign when he collapsed during a pre-season friendly against Werder Bremen.

Affectionately known as ‘Appie’, the midfielder suffered a cardiac arrhythmia, leaving him with severe and permanent brain damage.

“Yesterday someone brought an enlarged photo in here of my brother in his playing kit, in a game against Feyenoord, and even the photo was difficult to see,” his brother Abderrahim told The Guardian in December.

“If I watch videos of Abdelhak playing, it’s only the first 10-15 seconds and then I can’t watch any more, it’s too difficult.”

I will never understand why such horrible things actually happens to genuine people who are positive and have good intentions to make something with their lives…. meanwhile it seems like those people who are the opposite get away with everything God has forbidden, continuously moving on to whats next for them! Words describe only 10% what i'm feeling right now not only for him but for his family and everybody around him… for everybody who knew that this was yet another special player brought up by Ajax and was ready to show the world his talent 💔 @abdelhak_nouri i will pray for you and stay strong..

With just three minutes of first-team football at Feyenoord under his belt, Schuurman made a handful of Eredivisie appearances on loan at Willem II last season and is now in the second tier with NEC Nijmegen.

After scoring 25 goals in 103 appearances for Molde, Svendsen was sold before his contract expired, moving to Sweden with Hammarby in 2017. He scored six goals in 10 appearances last season for his new club.

Polish forward Kownacki netted 27 goals in 117 appearances for Poznan before joining Sampdoria in the summer.

He has settled well in Italy, netting six times in 17 games, while his record for his country is exceptional, scoring 25 in 33 throughout the youth teams.

Wolves splashed out a Championship record £15.8million on Neves last summer. The central midfielder has proven worth every penny, catching the eye as his side close in on automatic promotion.

With four caps for the Portugal national team already under his belt, he may even be pushing for a place in the World Cup squad.

Despite rumours to be joining Chelsea, Manea moved to Cyprus with Apollon Limassol in 2014 but is yet to appear for the club, spending time on loan in Belgium with Mouscron and now back in Romania with a temporary switch to CFR Cluj.

In 2014 he earned his sole international cap, becoming the youngest player to ever play for Romania at the age of 16.

The striker announced himself to supporters at the start of the season with winners in consecutive away games – one of which came at Benfica in the Champions League.

He has failed to score since, though he has broken into the first team having made 18 appearances so far this term.

Jovic looks like he could be the real deal, judging by his scoring record so far. His performances for Red Star earned him a move to Benfica, though he never got a chance with the first-team.

He started a two-year loan with Eintracht Frankfurt this summer, which includes the option to buy at the end of the spell, and has scored five goals in 15 Bundesliga appearances.

Without a club at the time of The Guardian’s article, Fandi made it in on the basis of his performances for Singapore’s Under-23s.

After completing his national service, the son of Singapore legend Fandi Ahmad is back in the game now and plays for Home United, while he has also made 11 appearances for the national team.

Lakay made his Santos debut aged just 15 way back in 2012, but injuries have plagued his career and he recently joined Ajax Cape Town on loan from current club SuperSport United.

In 2014 he became the youngest ever South Africa international – but it is his only cap to date.

Seo remains in the youth set-up at Pohang Steelers and is yet to break through into first-team contention.

It looked like Marin’s first-team breakthrough would come a few years ago, but after a handful of appearances here and there he spent last season on loan at Leganes, where he struggled for game-time.

He has featured just twice this term and has been an unused substitute on nine occasions.

Another left-back who hasn’t quite lived up to his billing, leaving Barca before managing to graduate to the first team. He joined Bilbao’s second string but failed to make an impression and struggled both physically and mentally.

Arellano revealed he nearly gave up the game but joined Osasuna B in 2016, and has made 12 appearances in the third tier so far this season.

The defensive midfielder is still with Barca, lining up 32 times for the B team as they won promotion last season, and he has featured nine times in the second tier so far this term.

A cruciate ligament injury at the end of the 2016 season halted his progress slightly, but he returned to Trelleborg on loan, playing 23 games as they won promotion to the Swedish top flight.

Andersson returned to Trelleborg on loan from giants Malmo again ahead of the 2018 campaign.

Making his debut in the Super Lig aged 16, Unal scored that day to make him the youngest player to ever score in the competition.

He didn’t make a single appearance for Manchester City between 2015 and 2017 but impressed in loan spells, most notably at FC Twente where he netted 19 goals in 33 appearances last season.

The forward joined Villarreal in the summer for £12million, with City retaining a buy-back clause, and after eight games and two goals he moved to fellow La Liga club Levante on loan.

The American joined Manchester City in January after his Kansas contract expired and was immediately loaned out to Belgian club Kortrijk, where he has made one appearance.

The Guardian’s man in Asia John Duerden claimed the midfielder “has continued to star in the Vietnamese league”, but he made just three starts in the 2017 season, spending 21 games as an unused substitute.

His club, who are affiliated with Arsenal, have slipped down the league table in recent years, though Hau made two appearances in the Under-20 World Cup last summer.

Rating the 15 players Barcelona have signed from England since 2000