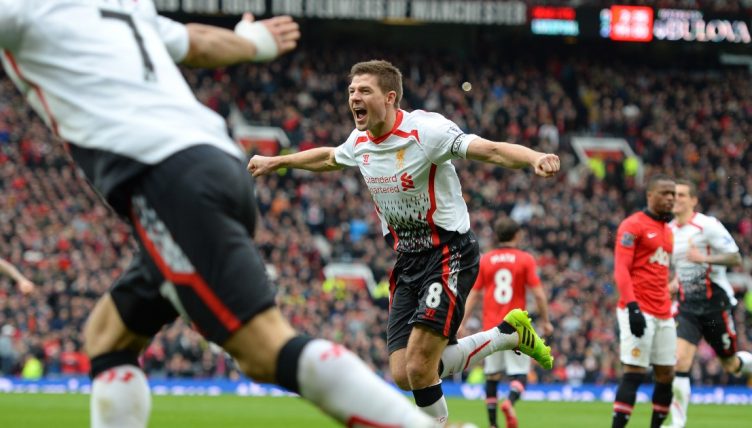 On March 16, 2014, Liverpool beat Manchester United 3-0 in what remains the Reds’ last victory at Old Trafford.

We’ve taken a look back at Liverpool’s side from that day to see how they’ve fared since.

Mignolet was doing well in his first season at Liverpool when they beat United at Old Trafford in 2014, but he was never quite able to push on and get up to the standard required, committing too many errors for a team with title-winning pretensions.

Jurgen Klopp first tried to replace him with the equally mishap-prone Loris Karius. Then, after Mignolet’s fifth season at the club, Brazil No.1 Alisson arrived and the Belgian barely got a look in from there.

In 2019, Mignolet returned to his homeland where he signed with club Brugge, winning the first league title of his career in 2020.

Johnson, who arrived at Liverpool in 2009 as one of Rafa Benitez’s last big-money buys, played 29 times for the Reds as they finished second to Manchester City in 2013-14. By then, though, his time at Liverpool was already winding down.

The next season was interrupted by injury, and the right-back was then allowed to move to Stoke City on a free transfer. After three years with the Potters, he retired in 2018 and is now a pundit for the Premier League’s in-house channel.

The tattooed, skin-headed Skrtel was hard as nails in the heart of Liverpool’s defence for a full nine seasons from his arrival in 2007. They called him ‘the Terminator’ and the fans loved him – even though he did score a Premier League record four own goals in 2013-14.

After leaving Merseyside, Skrtel moved to Turkey where he played for Fenerbahce and Istanbul Basaksehir, winning the Super Lig with the latter in 2020.

Skrtel managed another win over United in 2019 with Basaksehir after which he was quoted as saying: “It’s our first win in the Champions League ever, we wish we could play Manchester United every week.”

That caused quite the stir, but Skrtel moved to clear things up the next day. On Instagram, he wrote: “Just to make it clear! This sentence which is going around social networks, it’s something I never said!

“I had not [done] interviews after the game and all kind of news like this are fake! I do respect every opponent and I’m experienced enough to know that something like this is not right and I would never do it!”

We imagined he enjoyed the victory nonetheless.

Alongside Skrtel in the defence at Old Trafford was Agger, who partnered the Slovakian so many times over the years. Agger loved the club – so much so he had ‘YNWA’ tattooed on his knuckles – and Liverpool loved him back, despite all the injury troubles he had.

“Quickly, it was like I belonged and the longer you’re in a place that suits you, the more it gets under your skin and becomes a part of you,” he said of Liverpool when he left for boyhood club at the end of the 2013-14 season, “The people, the place, just everything about it felt right.”

The defender spent two years back at Brøndby IF before announcing his retirement at the age of 31 due to an over-reliance on anti-inflammatories.

Away from football, Agger currently owns a tattoo parlour, a bar and an investment company – oh, and he is also the chairman of a sewer company in Denmark!

Flanagan had the season of his life in 2013-14, deputising for the injured Jose Enrique at left-back. He was dubbed the ‘scouse Cafu’ and made his England debut that year.

But repeated knee issues stopped his career from following the path most imagined it would. After loans at Burnley and Bolton, he moved to Rangers in 2018 and has since joined Belgian side Charleroi.

Henderson was still a relatively young buck in this Liverpool team but there had been doubts about whether he would make the grade at Anfield. In the summer of 2012, he almost left the club for Fulham.

He recovered from that initial uncertainty and has become a hero on Merseyside, taking over from Gerrard as captain and leading the Reds to Champions League and Premier League glory in 2019 and 2020, respectively.

For years, the battles with United felt deeply personal for Gerrard, especially when, in 2013, outgoing United boss Sir Alex Ferguson wrote in his autobiography that he was “one of the few who felt Gerrard was not a top, top player.”

His penalties either side of half-time at Old Trafford in this one would have felt particularly sweet after that.

With Gerrard now a league-winning manager at Ferguson’s old club Rangers, however, it seems the relationship between them has settled.

“I’ll let you into a little secret: I’ve had a couple of conversations with him,” Gerrard said in May 2021. “Since I retired we have parked our rivalry up and he gave me time on the phone to bounce a few things off him, a few questions to do with the management up here at Rangers.

“He was fantastic in those conversations. At some point moving forward I’d love the chance to sit down with him and have a coffee. He’s agreed to that and that’s fantastic from his point of view because he doesn’t have to give me his time, especially being a rival. But I think that goes to show what type of man he is. He’s not just the iconic manager we all know.”

Liverpool cult hero Lucas, meanwhile, is still chugging along at Lazio, for whom he left Liverpool in 2017.

They’ve not won a match at Old Trafford since 👀pic.twitter.com/YuC5vQO1J1

The Welsh midfielder had a great season for Liverpool in 2013-14 in Rodgers’ midfield diamond. Over the following seasons, however, game time was limited, and he left for Stoke in 2016.

Despite suffering relegation in 2018, he remains in the Potteries and has gone on to rack up over 150 appearances for the club.

Sterling was the rising star under Rodgers, ripping teams apart with his pace and skill. Then he left for Manchester City in 2015 and, well, Liverpool fans don’t really want to hear too much more about that.

Coutinho, his replacement that day at Old Trafford, left Anfield under a similarly stormy cloud in 2018 and has gone on to struggle badly in Catalunya. At least the transfer fee Liverpool got for the Brazilian served them pretty well, eh?

Under Rodgers, Sturridge was magnificent. Rodgers claimed that he had “every tool and every quality” to be a world-class striker, which did not appear too far wide of the mark in his first full season on Merseyside.

Sturridge’s body was not up to the rigours of top-level football, however, and he frustrated Rodgers’ successor Klopp with his endless matches spent out with a variety of knocks and strains. In November 2015, Klopp even suggested that Sturridge needed to learn “what is serious pain and what is only pain” to make himself available more regularly.

Eventually, he was replaced with the hard-running, high-pressing Roberto Firmino and left for Trabzonspor in 2019. Now 31, Sturridge is currently without a club having served a four-month ban for breaking rules around gambling.

Aspas, meanwhile, never got going at Liverpool. Yet since his return to Celta Vigo, he has gone on to become a top-class striker and cement his legendary status in Galicia.

All 50 of Daniel Sturridge's Premier League goals for Liverpool

The Uruguayan striker was a whirlwind of outrageous goals and magnificent skill in the 2013-14 season, scoring 31 times in 33 Premier League games and winning the European Golden Boot as Liverpool pushed for the title.

There were stunning strikes against West Brom, Cardiff, Everton, Tottenham and Norwich. And at Old Trafford, he topped off the win with a goal six minutes from time.

It was the last derby he’d play against United as the Uruguayan got his dream move to Barcelona that summer, going on to form a formidable trio with Neymar and Lionel Messi that brought Barca a Champions League and plentiful domestic silverware.

Having been released by Barca in 2020, Suarez is still banging in the goals for Diego Simeone’s Atletico Madrid and could lead them to the La Liga title aged 34.