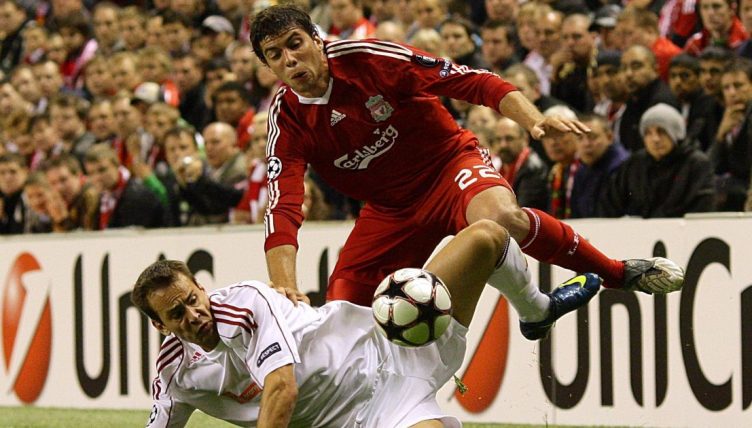 A scrappy 1-0 win, courtesy of Dirk Kuyt’s strike in first-half stoppage time, set the tone for the rest of their tournament, as the Reds failed to qualify for the knockout stages, finishing third behind Fiorentina and Lyon.

We’ve taken a look back at the Liverpool starting XI from that night, as picked by Rafa Benitez.

A Benitez favourite, Reina was later reunited with his former Liverpool boss at Napoli and they won the Coppa Italia together in 2014.

While Reina was always a reliable stopper under Benitez, the manager was not as convinced by his abilities to play in midfield.

Johnson enjoyed a brief Indian summer after leaving Liverpool for Stoke City in 2015, bizarrely becoming a transfer target for Barcelona and also earning a recall to the England squad.

But the right-back was released after barely featuring in Stoke’s relegation season, and his retirement in January 2019 came as no surprise after we witnessed him helping himself to a fair amount of free cheese at Wembley a few months earlier. True story.

Best known for his bromance with Gary Neville, it’s a little known fact that Carragher was once a defender for Liverpool.

After spending three years at Fenerbahce, Skrtel left the Turkish outfit for Serie A side Atalanta in 2019 only to have his contract terminated by mutual consent three weeks later.

“He said that at his age, he had trouble playing in a three-man defence which is understandable,” coach Gian Piero Gasperini said. “He arrived after we had started training, and he had difficulties.”

Skrtel then returned to Turkey to join Istanbul Basaksehir, making 44 appearances across two seasons before returning to his native Slovakia to sign for Spartak Tranava in the summer of 2021.

Hardly one of Benitez’s greatest buys, Insua made 62 appearances in all competitions across four seasons at Anfield before joining Sporting Lisbon after a loan spell at Galatasaray.

The left-back then earned a move to Atletico Madrid but once again struggled to establish himself, although he settled in Stuttgart, spending four and a half seasons there before a year with LA Galaxy and a 2021 move back to Argentina, where he joined Primera Division side Aldosivi.

Of the 2009-10 campaign, which proved to be his last at Liverpool, Insua told The Guardian: “It is also amazing for me to look back and remember I was in the same team as Torres, Gerrard, Carragher, Reina, Mascherano … a lot of big players who have had big careers. I will remember that time forever.”

Back in 2009, Lucas was still some way off the cult hero status he would eventually achieve at Anfield, but the Brazilian ended the season with 50 appearances – more than he managed for Liverpool before or since.

Since leaving in 2017, he has proved just as popular with Lazio fans after taking to Serie A like a duck to water.

Even with Liverpool thriving, we’re sure there are plenty of fans who sorely miss the midfielder, who played more than 300 games over a decade on Merseyside.

Now manager at Rangers, Gerrard already has experience of coaching at Anfield after taking charge of their youth side for a year. He’s surely going to get the top job at Liverpool at some point.

Kuyt, who was taken off for Fabio Aurelio late on, scored the only goal of the game on that uninspiring night against Debrecen.

Liverpool’s Mr Consistency ended the 2009-10 season with 11 goals, part of a run of five straight double-figure seasons, but only one of those 11 came after February.

Kuyt left for Fenerbahce in 2012 and eventually wound up back at Feyenoord, calling it a day in 2017 before briefly coming out of retirement to turn out for amateur club Quick Boys.

He’s now on Feyenoord’s coaching staff and has been talked up as a future manager at De Kuip.

Benayoun had scored his first Premier League hat-trick just a few days before the Debrecen game, hitting three of Liverpool’s four goals against Burnley, but didn’t score again until the home defeat to Lyon in October that all but sealed the Reds’ Champions League fate.

The Israel midfielder, replaced late on by Javier Mascherano against Debrecen, left for Chelsea at the end of the season. However, things never really clicked for him at Stamford Bridge in the same way.

Benayoun played for two further English clubs, Arsenal and a return to West Ham, before playing out the rest of his career for an assortment of Israeli clubs before retiring in 2019.

He is currently the sporting director of the last club he played for, Beitar Jerusalem.

Spanish winger Riera featured a lot less in 2009-10 than in the previous season, with Maxi Rodriguez’s January arrival effectively signalling the end for him at Liverpool.

The Debrecen game was only his third start of the campaign and was ultimately the only Champions League game he played that season. Even then, he didn’t see out the game, with Ryan Babel replacing him for the final 10 minutes.

Riera was sold to Olympiacos in 2010, while spells in Turkey, Italy, Spain and Slovenia followed before his retirement in 2018. Oh, and he had a very brief stint with Watford, let’s not forget that.

The 2009-10 season wasn’t Torres’ most productive in a Liverpool shirt, with injuries limiting him to 32 appearances in all competitions, but he remained a reliable goalscorer in that period before being rushed back by Spain for the World Cup.

After stints at Chelsea, Milan and Atletico Madrid, the striker finished his career in Japan with Sagan Tosu, announcing his retirement in 2019.