Where are they now? The Newcastle side that topped the PL at Xmas 2001 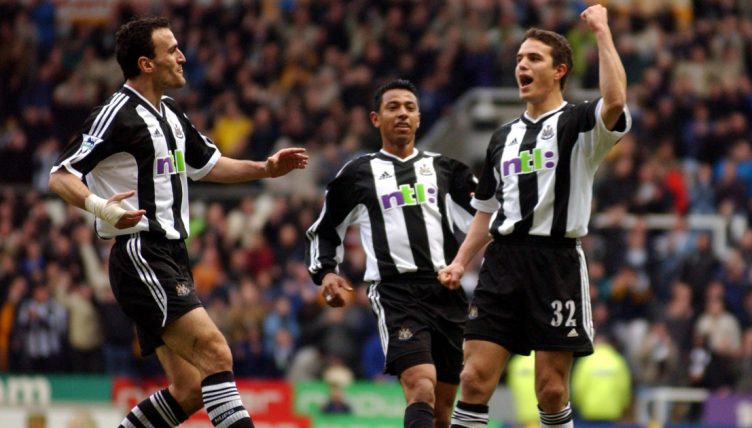 There has been a lot of talk about Newcastle since the club’s Saudi takeover, with the Magpies reportedly plotting an ambitious January window in an effort to return the club to former glories.

Most Newcastle fans think about the glorious 1990s, when, though they didn’t win anything, they finished runners-up in the Premier League and FA Cup twice, playing brave, exciting football.

A few years later Newcastle had one last big push for the title up their sleeve and, on Christmas 2001, they found themselves firmly on top of the Premier League.

Overseen by the late great Bobby Robson, with plenty of talent both old and new, Newcastle beat Leeds 4-3 in a slobberknocker of a match on 22nd December 2001 and sat top come the 25th. Was this finally their year?

Of course not. Newcastle collapsed in the second half of the season to finish fourth overall. Nevertheless, they were some team, the likes of which many fans would do anything to see back at St James’ Park.

So here’s the side that played Leeds, subs and all, and where they are now, 20 years on.

You can tell someone’s age by which club they think of when they hear the name Shay Given.

One of the more underrated Premier League goalkeepers, while younger fans might recognise him more as a City player, Given made his name at Newcastle.

He established himself as the first-team goalkeeper properly during the 2001-02 season, playing every game.

The Donegal man stayed at Newcastle until 2009, 12 years after he joined, leaving for Manchester City where he also became a part of the furniture, although never quite came close to the 463 appearances he made on Tyneside.

But he did win the Premier League and FA Cup with City, before moving on to Aston Villa and finishing his career as back-up with Stoke.

Given is the second-most capped Irishman of all time, behind Robbie Keane, and is now a coach at Derby alongside Wayne Rooney.

Hughes came up through the ranks at Newcastle, making his senior debut in 1997.

He was a mainstay of successive Newcastle teams until 2005, capable of playing across the defensive line.

Hughes made over 275 appearances for his boyhood club before leaving for Aston Villa and then Fulham, helping them get to the Europa League final in 2010.

He then had stints at several clubs, including the Kerala Blasters, before retiring at Hearts in 2019, his career spanning 24 years.

After making over 100 appearances for Northern Ireland, he now works as their Elite Football Development Consultant.

O’Brien’s youth development saw him move from Leeds to Bradford where he became a crucial player until 2001 when the club sold him to Newcastle due to financial difficulties.

The 2001-02 season was O’Brien’s first on Tyneside and he became a crucial part of the Newcastle backline, where he stayed until 2005 when he moved to Portsmouth.

Bolton and Leeds followed where he had a difficult time towards the end, struggling with depression amongst other things and being transfer-listed by Neil Warnock. He finished his career with two years at the Vancouver Whitecaps.

He has been a scout with Liverpool since 2015.

Having arrived from Olympiakos, Dabizas became a hero for Newcastle.

He was one of the first names on the team sheet for most of his time at the club, famously scoring the winner against Sunderland in February 2002.

He spent five years there, from 1998 to 2003, and then two seasons with Leicester first trying to keep them in the Premier League and then trying to get them promoted back into it.

A Greek Cup in 2007 with AEL finished off a proper cult hero career. He’s director of football at Greek team Omonia Lefkosia, now.

Sylvian Distin had to replace the Greek man at half-time due to injury, but he was a more than adequate replacement.

On loan from PSG for the 2001-02 season, it was the first of 15 consecutive Premier League seasons for Distin, which is the most of any foreign player in the league’s history.

He finished his career with Bournemouth in 2016. He is now a strength and conditioning coach and football consultant.

Some players always seem destined to return when they leave a club, and Elliott did so no fewer than three times at Newcastle.

A Newcastle boy, he came out of the club’s youth academy and was an important player, but left when new manager Kenny Dalglish accepted a bid from Bolton in 1997, where he stayed until 2001, returning to Newcastle on a free.

For the next five years, he operated as a squad player for the Magpies, but following his release in 2006 did the unthinkable and signed for Sunderland.

A poor six months there saw him leave for Leeds in January, where another poor six months saw him drop down the divisions to Hartlepool where he ended his career in 2008.

He returned to Newcastle as a fitness coach and now is a strength coach with the youth US men’s national team.

Dyer made over 225 Premier League appearances but it would have been considerably more if he had not had to battle with injury for large parts of his career.

Most of those appearances came at Newcastle, whom he joined in 1999 from boyhood club Ipswich for the Tractor Boy’s then-record transfer fee of £6million.

He was a regular under Bobby Robson’s sides in the early noughties and played exceptionally well in this match against Leeds, as the BBC match report notes.

He moved to West Ham in 2007 where injuries meant he only played 35 times in four years.

Queens Park Rangers and Middlesbrough rounded out his playing career, retiring in 2013.

Dyer returned to Ipswich as part of the youth coaching setup after his retirement and is now Under-23s manager in East Anglia.

What more is there to say about the Peruvian that hasn’t already been said?

He scored the winner in the match against Leeds and it wasn’t the last time he would score a vital goal for Newcastle.

A true cult hero for the magpies, Solano is now the assistant manager for the Peruvian national team. 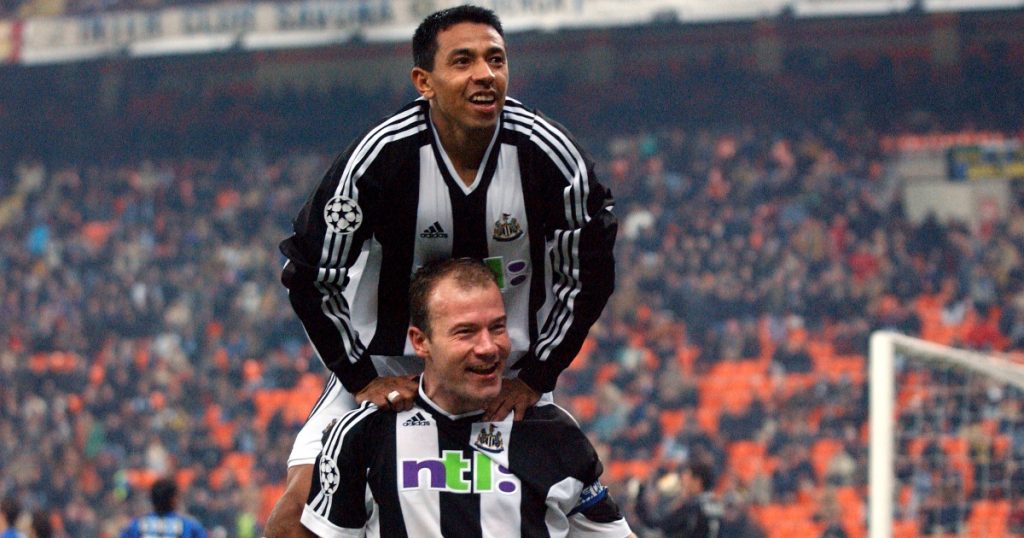 There is so much you could write about Gary Speed and not much of it would do him justice.

He is a true Premier League legend and was loved by fans everywhere he went. Leeds, Everton, Newcastle, Bolton and Sheffield United will all attest to his brilliance, as will anyone who had the pleasure of watching him in person.

Some hit, that. No messing about.pic.twitter.com/SWLnOujKct

Before Alan Pardew started turning Newcastle into France B, there was Laurent Robert.

A proper winger, Robert had a pin-point cross on him and was a set-piece specialist. None of this inside-forward or mezalla nonsense, just run down the wing and get it in the box.

He left Newcastle in 2006, upset with manager Graeme Souness. The rest of his career saw him travel to Lisbon, Toronto, Larissa, and even the exotic Derby.

Robert is now a youth coach at Montpellier, where he had started his career.

Often Robert formed a dangerous partnership with fellow Frenchman Bernard, who replaced him late into the match with Leeds.

Bernard had two stints with Newcastle and retired there in 2007 but still has connections to the North East as he bought Durham City in 2013.

He appointed himself CEO and has spoken about his desire to turn the side into a feeder club for bigger North East teams and to develop local talent.

Bobby Robson described Bellamy as “the gobbiest footballer I’ve ever met” and I think even from watching him on TV you know that’s true.

He joined Newcastle in 2001 from Coventry and formed a dangerous partnership with Alan Shearer which was the core of this Newcastle side.

Whilst he thrived under Robson, unsurprisingly Bellamy clashed with the equally combative Souness and left on loan to Celtic in 2005, probably just to piss Souness off more.

Bellamy played all around the Premier League after that, including twice with Liverpool. He retired in 2014 with Cardiff.

A period as Under-21s manager with Anderlecht ended in 2021. He is an occasional pundit with Sky.

LuaLua came on in the 90th minute for Bellamy, the Congolese striker spending four years with Newcastle from 2000 to 2004.

After leaving for Portsmouth he had a true journeyman career that saw him play in Greece, Turkey with various sides, and ending his career with Peterborough Sports in 2020.

He scored in the match against Leeds because of course he did: Shearer always scored.

The greatest Premier League striker of all time, a Newcastle hero, and the beating heart of successive Newcastle sides.

He might not have managed to win the club anything but he sure tried his best to do so.

A pundit with the BBC, he returned to Newcastle as a temporary manager in 2009 but couldn’t save them from almost certain relegation.

Arthur next? The five Brazilians to play for Newcastle & how they fared