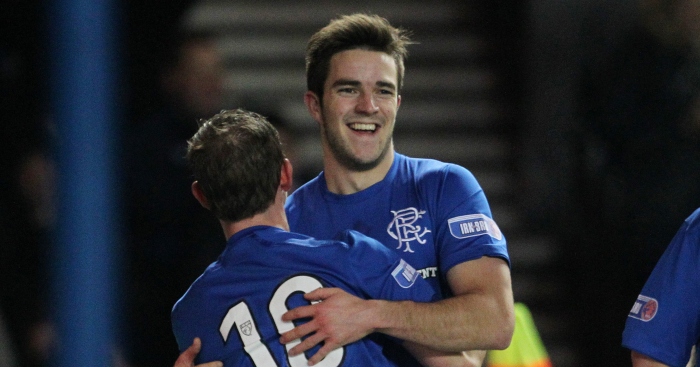 Financial problems forced Rangers to start afresh in 2012-13 – but where are the players who helped the Glasgow giants start climbing back up the Scottish Football League now?

Rangers were forced to start in the fourth tier of Scottish football and went on to win the league by 24 points as they began their ascent back to the top flight.

We’ve taken a look back at every player to make 10 or more appearances for the club that season to see whether they used that campaign as a springboard to success or remain in the lower reaches of Scottish football.

The veteran goalkeeper had largely acted as Allan McGregor’s understudy prior to that season before establishing himself as No.1 with 47 appearances in all competitions.

But Alexander left at the end of the campaign in acrimonious circumstances, upset at the salary and length of an offer of a new deal on the table, and ultimately sued the club for a breach of contract.

After spells with Crystal Palace and Hearts, the stopper returned to Livingston – 16 years after first leaving the club for Cardiff City – and helped the side win promotion from the Championship before retiring and becoming goalkeeping coach at Dundee United.

Argyriou swapped one precarious financial situation for another when he was released by AEK Athens, who were attempting to clear off their own debts, to join Rangers.

Despite signing a two-year deal at Ibrox, the right-back spent just a solitary season in Glasgow and has since played in Poland and Cyprus before returning to Greece.

Rangers fans don’t seem to have fond memories of Argyriou.

A right back who was slow, terrible with the ball at his feet and an all round shite footballer.

Another defender who probably shouldn’t search his own name on Twitter, Cribari boasted the likes of Udinese, Lazio and Napoli on his CV before he made the rather unique move from Cruzeiro to Rangers at the age of 32.

The Brazilian helped the Gers to back-to-back promotions before retiring upon the expiration of his contract in 2014.

“I left the summer they were demoted, but Ally McCoist asked me to come back for pre-season,” Hegarty told the Scottish Sun in 2018. “There were only seven or eight there. It was a crazy situation, but he offered me a year’s contract.

“I played in front of a full house at Ibrox and scored a goal there, which was a highlight for me. I played 32 first-team games and got a title medal.”

The defender moved back to his native Northern Ireland with Linfield following that campaign, but injuries saw him lose “the buzz” for football, which he has rediscovered at hometown club Dungannon Swifts, while he also works in a clothes shop.

A Scotland youth international, Perry became the first Rangers player born in the 1990s to appear for the first team when he appeared in a friendly against LA Galaxy, but he played the majority of his football for the club against the less-glamorous likes of Montrose and Annan Athletic.

The defender moved to England with Northampton Town in 2015 but swiftly returned to the lower reaches of Scottish football and now turns out for Dumbarton.

According to Wikipedia, this was either a former France youth international who came through the ranks at Lyon and now plays for MDA Chasselay in the French fourth tier, or an anarchist, freethought and secularist activist and a principal proponent of synthesis anarchism who died in 1942.

We’ll let you make your mind up on that one.

One of the more established players to remain at the club, Wallace remains at Rangers to this day and was even called up to the Scotland squad during that season in the fourth tier.

Templeton had been nominated for PFA Player of the Year in 2010-11 with Hearts but made the surprise move to drop down the divisions to join Rangers, although team-mate Ryan McGowan turned down a transfer at the same time.

The winger scored 15 goals in that first season and helped Rangers to the Championship but fell out of favour in their promotion campaign and was released, failing to earn a contract during trials at Vancouver Whitecaps and Dundee United.

He eventually revitalised his career with Hamilton before crossing the border to join Burton Albion in the summer.

One of the ‘benefits’ – for want of a better word – to Rangers’ financial problems was that it gave young players such as Macleod a chance to suddenly establish themselves in the senior side, and the midfielder quickly impressed in the first team, earning a new five-year deal just a few months into the campaign and ending the season by being named the club’s Young Player of the Year.

Injuries and health issues – as a teenager his career appeared under threat as a virus affected the muscles around his heart – stalled Macleod’s progress, but he went on to join Brentford in the 2015 January transfer window

A Scottish League Cup and Premier League winner with the club in 2011, Hutton is perhaps best known for being abducted and mugged by two men in Glasgow alongside his then-Rangers team-mate Kal Naismith.

After helping the Gers back to Championship level, the midfielder was released and now turns out for Dumbarton.

Another player who made a somewhat surprise decision to drop the down the divisions to join Rangers, Black had already experienced financial difficulties at Hearts, taking a job as a part-time painter while the club were struggling to pay the players’ wages.

The former Blackburn youth product actually won his solitary Scotland cap while playing in the fourth tier but was released after their first season in the Championship and moved to England for spells with Shrewsbury and Blackpool before dropping into non-league.

In 2018, he returned to boyhood club Tranent Juniors, currently playing in the sixth tier of Scottish football.

More on Sportsound at 6:30pm on BBC Radio Scotland.

Rangers’ spells in the fourth and third tiers presented Crawford with the majority of his opportunities to appear for the club, and he has since made the bold move by moving to the continent to first play in Iceland and now Finland.

A Canada international, Aird featured prominently in the first two seasons of the ‘new’ Rangers before enjoying a loan spell in his birth country with MLS outfit Vancouver Whitecaps.

The winger has since returned to Scotland and joined Queen of the South on loan from Dundee United in January.

McKay made his professional debut in Rangers’ final game in the Scottish Premier League prior to their demotion and scored their first goal in the fourth tier.

Despite catching the eye with a number of exciting performances, the attacker also had to prove himself with loan spells at Greenock Morton and Raith Rovers before returning to Ibrox to be named in the Championship Team of the Year as they won promotion back to the top flight.

The 24-year-old moved to the English Championship in 2017 with Nottingham Forest, reunited with his former Rangers boss Mark Warburton, and joined Swansea City in the summer.

One of the biggest names to drop down the divisions, McCulloch ended the campaign as Rangers top goalscorer in all competitions with 26 to his name.

In 2014, the former Scotland international was inducted into Rangers’ Hall of Fame but left the club in 2015 suggesting he had become the “fall guy” among supporters.

McCulloch subsequently joined Kilmarnock as a player/coach an had a brief spell as manager before being appointed assistant at Lechia Gdansk in 2018. He now works as strikers’ coach at Dundee United.

On this day in 2014, Lee McCulloch scored a hat-trick in a 3-0 win over Airdrie as Rangers clinched the League One title. pic.twitter.com/Pp2q5vaVes

After winning the League Cup with Kilmarnock and being nominated for the SPFA Players’ Player of the Year, Shiels rejected a new contract at Rugby Park and claimed he turned down offers from Champions League sides to join Rangers.

The former Northern Ireland international remained with Rangers until their promotion to the Premiership was sealed but has since jumped around clubs, including a spell at Canadian outfit FC Edmonton, and currently plays in his home country with Coleraine.

Little had been in and around Rangers’ first team for a number of year by this point, but this was still his first prolonged stint in the starting XI, and he responded by scoring 25 goals in all competitions.

A nasty injury which saw him break his jaw and cheekbone derailed his following season and he was released, embarking on an unsuccessful stint in England with Preston, Blackpool and Accrington Stanley.

He subsequently returned to Scotland but suffered another bad injury, fracturing his skull and eye socket in a clash of heads in training and retired aged just 29, taking up a role back at Rangers as a coach.

The Scottish Third Division would be Naismith’s only taste of first-team football with Rangers before he was released at the end of the season, moving to Accrington Stanley before helping Portsmouth win promotion.

Our favourite story of the whole lot, in February 2012, Sandaza rejected a pre-contract offer from Rangers, who were still in the top flight at the point, while at St Johnstone.

After Rangers were plunged into financial disarray, the striker went on to say he was glad he didn’t agree to the deal, only to go on to sign for the club in the summer anyway.

Having scored two goals in 19 appearances for the club, he was released before the end of the season after telling a hoax telephone caller pretending to be a football agent he had only joined Rangers “for the money”.

He went on to help fire Girona to promotion to La Liga before spells in Japan, Qatar and China. He is now back in Spain with Alcorcon.

In 2018, Kyle shone a light on his wage negotiations with Ally McCoist and Rangers which perhaps go some way to explaining why the club found themselves in such financial difficulties.

“I went back outside and had a wee think about it, and I thought, ‘F*cking hell man, is this happening to me?’ I was buzzing. I’d have played with Rangers for nothing!”

A striker who reached double figures for league goals in a single season just once in his career bagged all of three times for Rangers in the fourth tier.

To be fair, by this point Kyle was struggling with a hip injury which had blighted his previous 18 months, and he last played in 2014 after a brief spell with sixth-tier side Newton Stewart.

The six stages of Ryan Kent’s development at Rangers: Boy to man