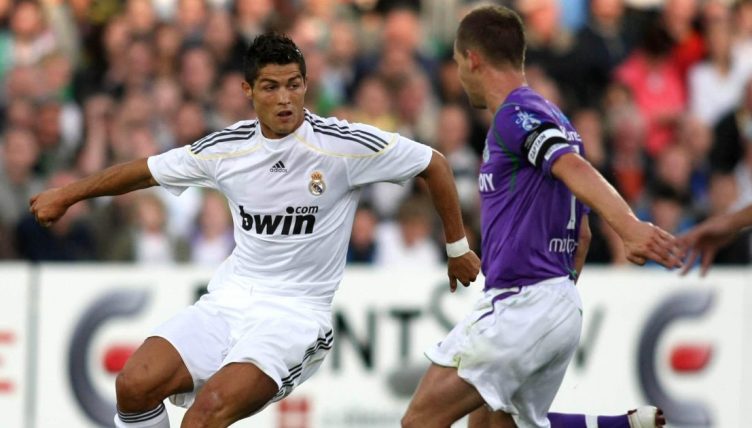 We still associate Cristiano Ronaldo with modern-day Real Madrid – but looking back at the team from his debut on July 20, 2009 feels like looking at a completely different era.

Ronaldo made his last appearance for the Spanish side in the 2018 Champions League final, but his debut came in slightly different surroundings in a pre-season friendly against Shamrock Rovers.

Madrid won the game 1-0 thanks to fellow debutant Karim Benzema’s late goal, and we’ve taken a look back at their team on that day.

Dudek made just 12 competitive appearances for Madrid over four years, mainly acting as a back-up to Iker Casillas. Yet, despite his limited impact, the goalkeeper received a guard of honour from his team-mates during his final appearance for the club.

After retiring in 2014, he took up a career in motor racing and has competed in the Volkswagen Castrol Cup.

Torres came through the youth ranks at Real Madrid and won two league titles with his hometown club. He moved on to Getafe not long after Ronaldo joined before spending a season with Olympiacos.

The full-back retired at in 2019 after five years with Malaga.

Pepe spent 10 years with Madrid and won three league titles and three Champions Leagues in the process. And we well as being a bloody good defender, he will always be remembered for his aggressive style – with Real he was once suspended for 10 games after kicking and punching a player before verbally abusing a referee.

He left Madrid in 2017 and spent a year with Besiktas before returning to Porto in 2019, who he led to the Champions League quarter-final in 2021. He was also a part of the Portugal squad that won Euro 2016 and the UEFA Nations League. 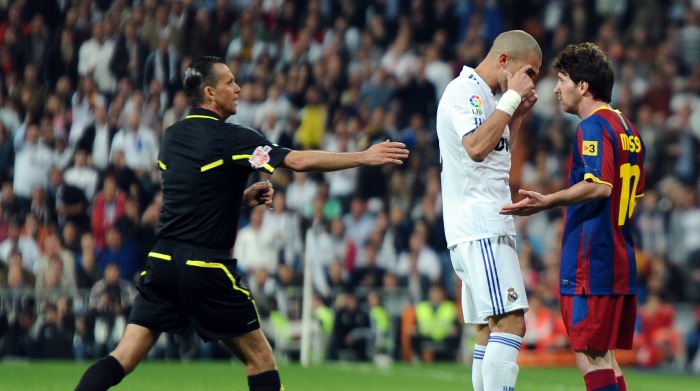 The defender never established himself in the Madrid team after signing from Borussia Dortmund in 2007. When his contract expired in 2010, the German joined Schalke before retiring in 2013 after struggling with injuries.

In April 2021, Metzelder was given a 10-month suspended prison sentence by a German court after being found guilty of distributing child pornography.

Gago made over 100 appearances for Madrid, but his career has been defined by injuries.

The midfielder had spells with Roma and Valencia before returning to his former club Boca Juniors in 2013, but in February 2019 he had his contract terminated.

“He is a player who came from our youth ranks and we do this with pain but due to repeated injuries he decided to step aside,” Boca president Daniel Angelici said. Gago went on to join Velez Sarsfield but retired in 2020.

Diarra signed for Madrid on the same day as Cristiano Ronaldo, but it’s fair to say he didn’t quite make the same impact. After four years at the club, he fell down the pecking order and was sold to Russian side Anzhi Makhachkala, later spending time at Lokomotiv Moscow, Marseille and Al Jazira.

In 2018, Diarra made a surprise move to PSG, but his contract was mutually terminated 13 months later as he announced his retirement.

Did alright at Real Madrid, apparently. Not done too badly for Juventus either.

An academy product at Madrid, Guti became a renowned as a talented playmaker capable of producing moments of brilliance. During his 15 years at Madrid he won five La Liga titles and three Champions League trophies.

The midfielder spent a season with Besiktas before retiring in 2012. He coached Real Madrid’s under-19 team and returned to Besiktas as assistant manager.

He then earned his first job as first-team manager at Almeria, where he later offered to resign and refund his salary if rumours that he attended a nightclub with his players following a defeat were proved true. He kept his job, only to be sacked a few months later in June 2020.

The striker scored 122 goals for Real between 2007 and 2013 before joining Napoli in 2013 and then making the controversial switch to rivals Juventus in 2016.

In the second half of the 2018-19 season he had an unsuccessful loan spell with Chelsea, scoring only five goals. Unsurprisingly, the Blues didn’t take up an option to extend the Argentine’s stay, although he has enjoyed more success at Juventus after being reunited with Maurizio Sarri.

By 2009 Raul was approaching the end of his Madrid career and he left the club in 2010 to join Schalke before signing for Al Sadd two years later. The striker retired in 2014 before returning to play for two years with New York Cosmos.

In 2018, he became a youth coach at Real Madrid and was appointed manager of Real Madrid Castilla in June 2019.

Salgado was released by Madrid in August 2009, joining Blackburn Rovers later that summer. During the 2011-12 season, he was omitted from Rovers’ matchday squads because they couldn’t afford to give him a new deal.

He came out of retirement in 2016 at 40 years old to join Indian futsal side Kochi 5s. In 2018, he was named Egypt’s assistant manager.

Garay was never a regular for Madrid and joined Benfica in 2011. He later moved to Zenit Saint Petersburg but returned to La Liga with Valencia. The defender has been without a club since asking to be released in February 2020 following a serious knee injury.

He left Madrid for Marseille in 2009 and also played for Roma and Newell’s Old Boys before retiring in 2014.

The former Manchester United man has since become a very accomplished manager in Argentina with Godoy Cruz and Argentinos Juniors and spent three years in charge of Velez Sarsfield before resigning at the end of the 2020 campaign.

For the 2021 season, he’s taken over at Atlanta United in MLS.

Drenthe has an interesting CV, playing for a host of clubs including Everton, Reading, Sheffield Wednesday, Alania Vladikavkaz and Kayseri Erciyesspor.

Surprisingly, he is still only 33 and spent last season with Sparta Rotterdam. Less surprisingly, they did not extend his contract, and he has since played for amateur outfit Kozakken Boys and, most recently, Racing Murcia in Spain’s convoluted third tier.

Away from football, he has opened a clothing store and also briefly retired to release a rap song in 2017.

Parejo never really got a chance at Madrid and moved to Getafe in 2011. He then established himself as a regular at Valencia and moved to Villarreal, where he won the Europa League. He has four caps for Spain, too.

Van Der Vaart moved to Tottenham in 2010 and soon became a fan favourite during his two years at White Hart Lane. He then had spells with Hamburg, Real Betis, FC Midtjylland and Esbjerg fB before retiring in 2018.

In 2019, he joined the British Darts Organisation circuit and made his pro debut at the Denmark Open.

After Ronaldo’s arrival, Sneijder was deemed surplus to requirements at Madrid and was sold to Inter Milan. The midfielder went on to win the Treble in his first season in Italy, and he has since played for Galatasaray and Nice.

Sneijder joined Qatari club Al-Gharafa in 2018, retiring a year later to take up a role with hometown club Utrecht.

Due to Madrid’s forward options, Negredo never played for the first team and instead made a name for himself at Sevilla. His form then earned him a move to Manchester City before returning to Spain with Valencia.

He has since played for Middlesbrough, Besiktas and Al-Nasr Dubai SC before returning to Spain to join newly-promoted Cadiz in 2020 and helping them avoid relegation.

Along with Marcelo, Benzema is the only player still at Real Madrid.

Tebar only ever made one appearance for Madrid’s first team, and he has since played for several clubs in Spain.

In 2014, he had a short spell with Brentford and more recently played in the Indian Super League with Delhi Dynamos and Odisha FC.