Where are they now? Spain’s XI from their Euro 2008 QF win over Italy 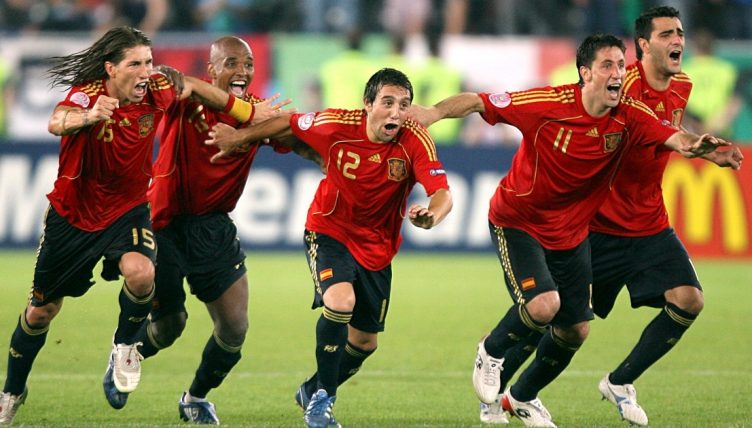 Spain had impressed at the group stages of Euro 2008 but their biggest test awaited them in the Vienna quarter-final – world champions and old foes Italy.

The Italians had the habit of eliminating Spain from major tournaments, but La Roja weren’t to be denied this time. After a goalless 120 minutes, Spain triumphed in the penalty shoot-out and went on to win the competition. They won the following two for good measure.

We’ve taken a look at the Spanish line-up that kick-started a dynasty and what they’re up to now.

The man known as ‘San Iker’ in his home country, Casillas is widely regarded as the best Spanish goalkeeper of all time.

He was already well established at Real Madrid before a freak injury to Santiago Canizares allowed him to become Spain’s number one at the 2002 World Cup.

And Casillas was the hero against Italy six years later, saving penalties from Daniele De Rossi and Antonio Di Natale in the Vienna shoot-out.

Casillas retained his starting place throughout Spain’s golden age until his horror show against Arjen Robben in Brazil 2014. From there, his career wound down via a five-year spell at Porto.

The decorated goalkeeper retired in August 2020 and was appointed as the deputy to the Real Madrid Foundation CEO just months later.

Watch out Europe – Ramos is reportedly set to sign for PSG with a point to prove after being dumped by Real Madrid.

Grab the popcorn and watch the fireworks fly. 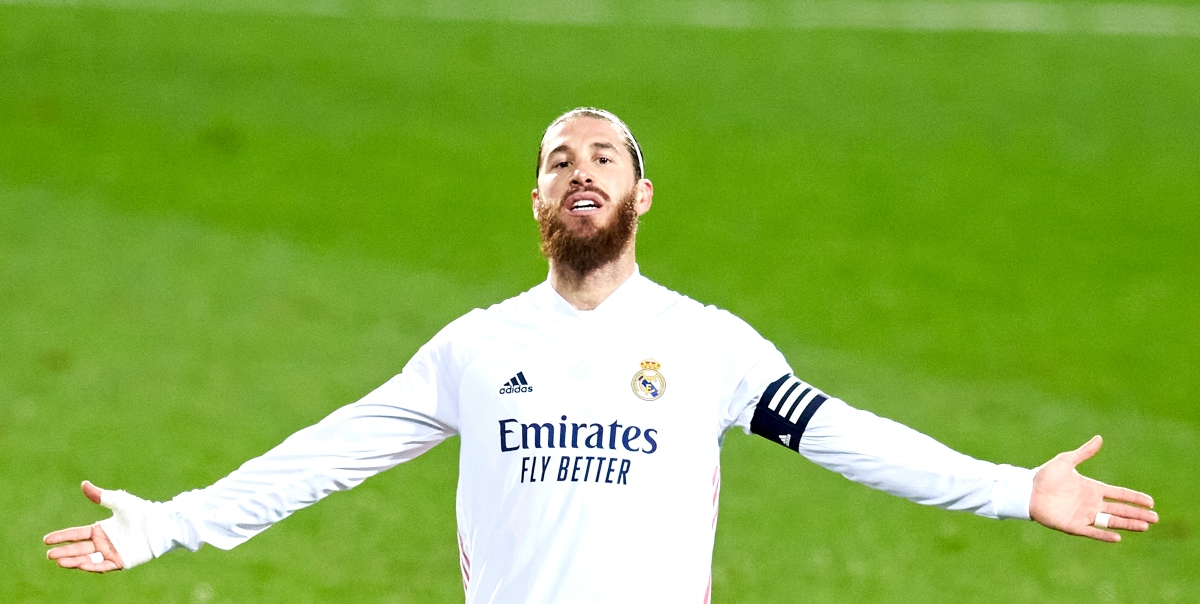 READ: Sergio Ramos and a tackle that perfects all his imperfections

The emergence of Gerard Pique after this tournament cemented his place as Spain’s starting centre-back for the next decade, but it was Marchena who starred in Austria and Switzerland.

The Valencia defender impressed fans across Europe with his man-marking skills as Spain conceded just two goals when he was on the pitch.

After the Euros, Marchena spent a few more seasons at the Mestalla before spells at Villarreal, Deportivo and Indian side Kerala Blasters.

He retired in 2016 and became a coach with the Sevilla C team. Marchena was last seen on Spain’s coaching staff at the 2018 World Cup.

One of the greatest centre-backs of all time, Puyol excelled at Euro 2008 and scored an iconic winner against Germany in the 2010 World Cup semi-final.

Captaining Pep Guardiola’s era-defining Barcelona side, Puyol won every available major honour before his retirement in 2014.

Puyol rejected an offer to be Barcelona’s sporting director in 2019.

Arguably the least regarded starter of Spain’s imperial teams, Capdevila provided defensive solidity as Spain failed to concede a goal during their three knockout matches in 2008.

The only Spanish starter in the 2010 World Cup final who didn’t play for Real or Barca, the full-back spent four successful years at Villarreal before moving to Benfica in 2011.

He spent the rest of his career in various locations including Espanyol, India, Belgium and Andorra before hanging up his boots in 2017.

Two wonderful midfielders that are keeping their careers going in lucrative Asian leagues.

Iniesta helped redefine what it takes to play in midfield as a cornerstone of that wonderful Barca side. The pint-sized magician played 674 times for the club during 16 trophy-laden years before taking himself off to Japan and Vissel Kobe in 2018.

We were surprised that Cazorla was an international footballer that long ago but he scored an important penalty against Italy. A semi-regular presence during the golden years, Cazorla became a cult figure at Arsenal later in his career despite suffering a series of injuries.

After two spells at Villarreal before and after his time in England, Cazorla signed for Qatari side Al Sadd in 2020 where he’s still doing bits.

Senna was the unsung hero of Spain’s victorious Euro 2008 side and was one of nine Spanish players named in UEFA’s Team of the Tournament.

In fact, we love this guy so much that we’ve previously waxed lyrical about just how good he was. 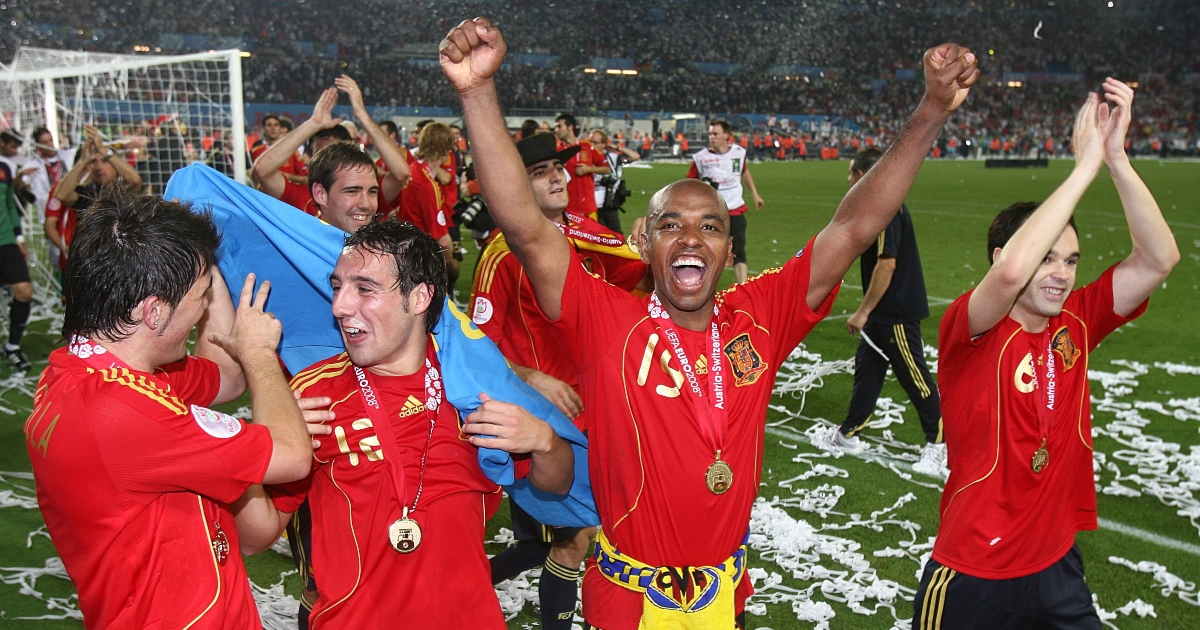 READ: The deferential dictator: Marcos Senna and the blossom of Spain’s golden age

There are civilisations in the Amazon rainforest untouched by human civilisation who are aware Xavi Hernandez was one of the greatest midfielders to ever play football.

After winning plaudits and prizes throughout his career, including player of the tournament at Euro 2008, Xavi is currently emulating Michel Platini by endorsing Qatar’s questionable hosting of the 2022 World Cup. A career in football administration surely awaits.

His replacement in Vienna was a sensational player and it speaks volumes about Spain’s strength in depth that Fabregas was often used as a substitute.

The scorer of the winning penalty against Italy, Fabregas left Arsenal in 2011 to win more silverware. Spells at Barcelona and Chelsea certainly fulfilled his wishes with the midfielder winning ten major honours before moving to Monaco in 2019.

Fabregas was most recently spotted working for the BBC during Euro 2020 and has expressed a desire to move into management after his playing days end.

He told talkSPORT: “It’s something that I like, I want to give it a go. I’m learning, studying, listening from a lot of different people and in football, you always keep learning every day so I’m happy about this.”

Many of Spain’s most legendary footballers wound their careers down stateside or in Asia, but Silva has gone down a different path.

Blessed with outstanding technical ability, Silva was an integral part of Spain’s procession through Euro 2012 and played all the important games four years earlier too.

He retired from the international game after the 2018 World Cup after winning 125 caps for the national team. No wonder Vicente Del Bosque once called him the ‘Spanish Lionel Messi’.

For all Spain’s mesmerising sequence of passes, Villa was normally the one tasked with sticking the ball in the net. Which he did. Regularly.

Top scorer at Euro 2008, the Valencia man also scored five at South Africa 2010 before injury ruled him out of the following European Championship.

Villa’s qualities were recognised by Pep Guardiola, who made him the cherry on Barcelona’s delicious cake following the World Cup. Following three successful seasons, Villa signed for Atletico Madrid and won La Liga in his solitary season for the club.

He then became something of a gap year student and spent time with New York City, Melbourne City and Vissel Kobe before retiring in 2020.

Villa was named head of Global Football Operations at Indian Premier League side Odisha FC in May 2021.

Scorer of the winner against Germany in the final, there’s just one word to describe Torres these days – hench.

Substitute striker Guiza was one of the lesser-known names that made up Spain’s victorious Euro 2008 squad. Something of a late bloomer, the Real Mallorca goalscorer made his international debut aged 27 and scored the winning goal against Greece in the group stages.

It was the peak of his professional life. Fresh from winning both Euro 2008 and the La Liga golden boot in 2007-08, rumours began to circulate about Guiza’s personal life and behaviour in training.

Del Bosque stuck with him for a further year but Guiza failed to make Spain’s squad in 2010 and spent time playing in Turkey, Malaysia and Paraguay during an eclectic career.

Now in his fifth decade, Guiza is still turning out for Cadiz-based side Atlético Sanluqueno and scoring goals in the fourth tier of Spanish football.