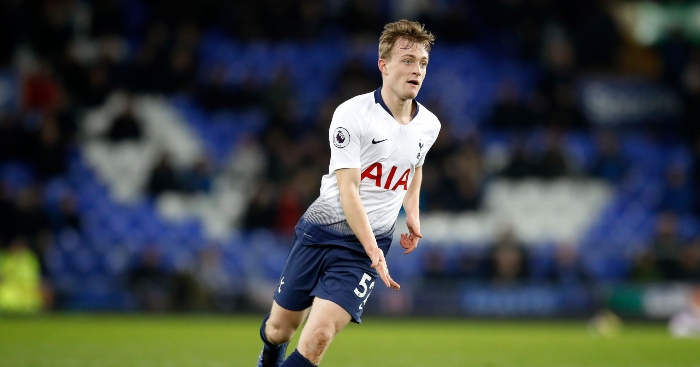 Tottenham Hotspur have long been known for giving academy players a chance, but only a few 17-year-olds have played for the club in the Premier League.

If Troy Parrott progresses from unused sub to league player before February, he will become just the fifth to do so before his 18th birthday.

Spurs have used plenty of teenagers, though. Here are the youngest 11 to take to the field for Spurs in a Premier League game, starting with the oldest at the time of their first game.

We’ll be honest with you, we don’t remember Danny Hill at all, but in our defence the 1992-93 season was a long time ago.

The midfielder played four times that season, including a full debut in a humbling 6-2 loss at Liverpool, but only made another seven league appearances for the club before dropping into non-league and retiring in 2006.

But he was part of a victorious North London Derby side so he did a lot more than most of us.

Blondel made his Belgium debut 10 days before replacing Milenko Acimović in Spurs’ victory over Southampton in 2002, but he would play just once more for the club. After more than a decade at Club Brugge, he retired in 2015.

PROFILE: Jonathan Blondel Midfielder Jonathan Blondel was rated as one of the best prospects in Europe when he joined Tottenham for £2.5m in July 2002, having turned down a move to Manchester United six months earlier. Aged just 18 when he made his first team debut against Southampton a month after joining, Blondel struggled with homesickness and lack of first team action and quickly moved back home after a total of four Spurs appearances, joining Club Brugge in January 2004. Blondel remained with Club Brugge until retiring in 2015, although the latter part of his career was hampered by injury. Capped 4 times by Belgium, his international appearances perhaps underline the fitness issues he faced, capped in 2002, 2004 and 2010. #COYS #THFC #Spurs #Tottenham #TottenhamHotspur #TTID #PremierLeague #EPL #TOWAS2000S #JonathanBlondel

Lennon had already played more than 40 games for Leeds before joining Spurs in 2005, and he ended his first season in London with a spot in England’s World Cup squad.

More than 14 years after replacing Teemu Tainio against Chelsea for his debut, the winger is still in the Premier League, having joined Burnley in January 2018.

One of many teenagers to be handed his debut by Mauricio Pochettino, Skipp also made his Champions League debut under the Argentine when he replace Giovani Lo Celso in a 4-0 win at Red Star Belgrade.

Skipp was just 18 years and 89 days old when he made his first Premier League start against Burnley, having come off the bench against Southampton 10 days earlier. He’s still there, of course.

Whatever happened to him?

Slabber was barely 18 years old when his goals earned him 11 minutes off the bench against Liverpool in 2003.

Sadly for the striker, those would end up being his only Premier League minutes. By the age of 21 he had dropped down to non-league, spending his career in the south of England with clubs including Eastleigh, Chelmsford and Grays, before hanging up his boots in 2018.

Another who played a fair few games before joining Spurs, Bale was already a full Wales international when he joined from Southampton.

We suppose he did alright there. Wonder if José Mourinho will try to bring him home?

Spurs’ 4-3 win over West Ham in 2007 was best known for Carlos Tevez’s double and Paul Stalteri’s late winner, but it was also notable for manager Martin Jol handing a debut to 17-year-old Taarabt.

His performances on loan that season earned the Moroccan a permanent deal, but he made a much bigger impact at QPR. As of 2019, he’s at Benfica and finally getting a run of games after waiting a very long time.

A promising right-back, Ifil started league games against Liverpool and Newcastle before turning 18, during Jacques Santini’s time in charge.

The Englishman got fewer opportunities under Martin Jol, though, finishing with just five Spurs appearances and falling out of the football league pyramid in the early 2010s.

Turner became the youngest Premier League goalscorer when he found the net for Spurs against Everton in September 1992, a record he held until 1997 when Michael Owen scored his first Liverpool goal.

Turner added two more goals in his 20 league games but left in 1996 before dropping down the divisions and retiring in 2008. As of 2018, he was running an academy for 16-19-year-olds looking to get their break in professional football.

One of the most successful players on this list, Carr made his Premier League debut in September 1993, less than a month after his 17th birthday.

The Ireland right-back spent more than a decade at White Hart Lane, and recently played in the Spurs Legends v Inter Forever game at the new stadium.

13 players who did nothing at Spurs but thrived elsewhere: Paulinho, Capoue…