How Paul Pogba fared in different midfield combinations in 2016-17 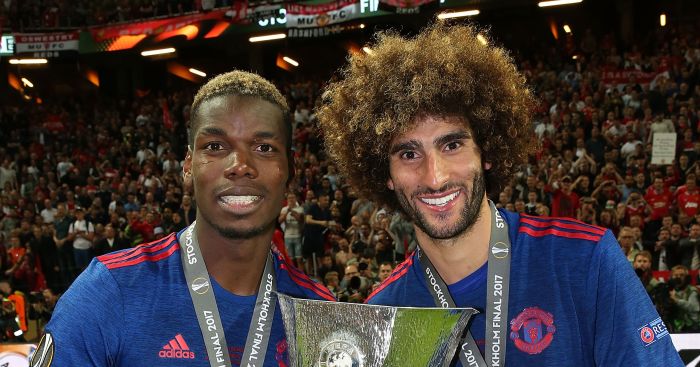 Manchester United have signed Nemanja Matic from Chelsea to give their engine room a major boost ahead of the new season.

The Serbian was part of the Blues’ Premier League title-winning side last season, scoring one goal and providing seven assists in 35 appearances, and has moved to Old Trafford for a £40million fee.

One player he will no doubt be looking forward to playing with is Paul Pogba, who will be looking to build on a polarising season with the Red Devils.

The pair will no doubt be playing together, either as a pair or as part of a three, but which of Pogba’s midfield team-mates in 2016-17 got the best out of him?

Early on the France international teamed up with Marouane Fellaini for a short period of four matches where they won two and lost two, giving them a win percentage together of exactly 50%.

It started off well with wins over Southampton – in which Pogba picked up the man of the match award – and Hull, encouraging Jose Mourinho to try the duo again versus Manchester City and Watford.

However, two losses in those matches spelled the end of the pairing for the rest of the campaign.

In six appearances with Pogba alongside Ander Herrera, meanwhile, United won three and drew three matches, with Pogba managing to bag a goal, an assist and a man of the match award.

Michael Carrick was given just on opportunity to impress next to Pogba in a match against Bournemouth towards the end of the season, but they failed to take their chance as the fixture ended 1-1.

(N.B. Goals, assists and man of the match relate to Pogba only.)

As part of a trio

Mourinho preferred playing Pogba as part of a three in midfield – 18 of his 29 starts in the Premier League saw him join two others in central midfield.

Pogba was at his most effective when alongside Carrick and Herrera, with two assists, a goal and a man of the match award in nine appearances.

Alongside Herrera and Fellaini, meanwhile, Pogba scored only once in seven appearances, but United won 57.1% of those games compared to 55.5% of the games with Pogba, Carrick and Herrera in midfield.

Pogba, Fellaini and Carrick played together in the 3-1 victory over Swansea in which the Frenchman scored, while he started alongside Axel Tuanzebe and Scott McTominay in a 2-0 win over Crystal Palace in the final match of the season.

Overall, when in midfield with Fellaini, Pogba has a win percentage of 58.3%, slightly higher than with either Herrera (54.5) or Carrick (54.5).

Altogether as a pair or as part of a trio, Pogba played 22 times in the centre with Herrera, 12 with Fellaini and 11 with Carrick – and was most successful on a personal level when on the pitch with Herrera, scoring three goals, claiming three assists and collecting two man of the match awards.

How do Romelu Lukaku and Zlatan Ibrahimovic’s 2016-17 stats compare?