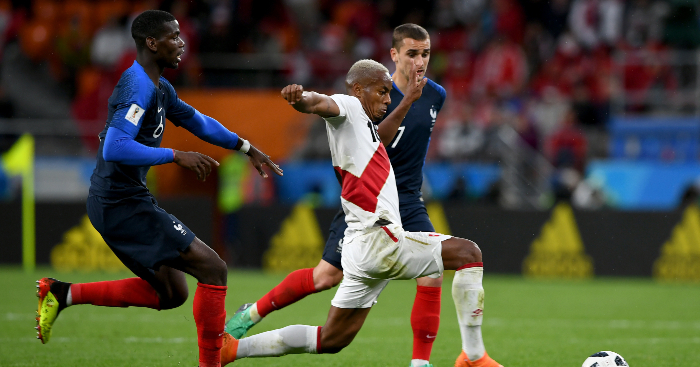 Not for the first time, Chelsea owner Roman Abramovich’s money – and what he’s been spending it on – has been in the headlines.

A panorama report from BBC News has revealed that Abramovich is behind an offshore company that was investing in stakes in overseas footballers through third-party ownership.

One of the names revealed to have been invested in by Abramovich’s company is Peruvian winger Andre Carrillo – but who is he, and what connection does he have to Chelsea? Here’s everything you need to know.

Born and raised in the Peruvian capital, Carrillo began to break through at boyhood club Alianza Lima back in 2010, catching the eye of European scouts.

As is so often the pathway for young South American talent, he made the switch to the Portuguese Liga NOS in 2011, signing for Sporting Lisbon, and went on to make over 100 appearances for the club while becoming a stalwart for the Peruvian national team.

He signed for hated city rivals Benfica in the summer of 2016 but failed to make an impact at the Portuguese champions and was subsequently loaned out to Watford for the 2017-18 campaign.

Regular Premier League watchers might remember him making 30 appearances for the Hornets that year, featuring in a forward line alongside Richarlison.

A key player for Peru as they qualified for their first World Cup in 36 years, he scored one of their only two goals as they exited Russia 2018 at the group stage, ending on a high note with a 2-0 win over Australia.

Since then he’s been turning out for Saudi Arabian club Al-Hilal and, still only 29, a return to European football can’t be ruled out.

The document leaks dubbed the ‘FinCEN Files’ have revealed that Abramovich is behind offshore shell company Leiston Holdings, which secured 50% of Carrillo’s ‘economic rights’ after becoming involved in his original transfer from Alianza Lima in 2011.

It’s reported that Leiston Holdings loaned Sporting €1million in order to help fund the deal. The practice of third-party ownership – i.e. investing in a player’s potential future transfer value – was banned by the Premier League in 2008, but not elsewhere until 2015.

Carrillo is unlikely to have appeared on many Chelsea fan’s radars and has never seriously been linked with a move to Stamford Bridge, but he did come up against the Blues in two Champions League group stage matches in 2014, while playing for Sporting and still part-owned by Abramovich’s company.

The winger did little of note across the two matches, with Jose Mourinho’s men winning 1-0 in Lisbon before a 3-1 victory in London.

“I don’t think it can possibly be proper for the owner of a football club to own players in other football clubs. That is precisely why third-party ownership is banned,” former FA chairman Lord Triesman told Panorama.

“It casts suspicion and a shadow right across football. On the documents I’ve seen I would’ve wanted, as chairman of the FA, to investigate them.”