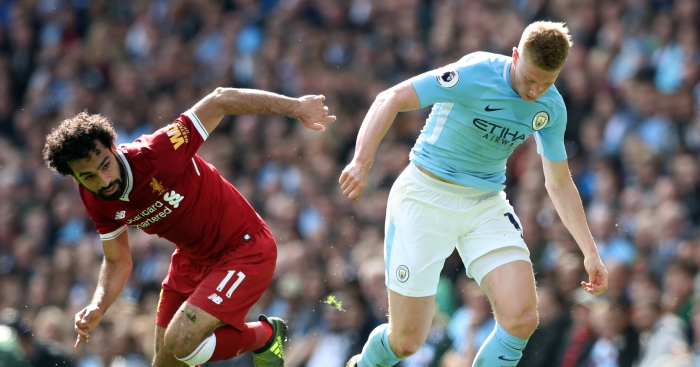 Manchester United and Tottenham players may have made the shortlist, but the battle for the Player of the Season appears to between Kevin De Bruyne and Mohamed Salah.

De Bruyne was considering a shoo-in for the award by many during the first half of the season, but Salah’s goalscoring exploits over the second half has put the cat amongst the pigeons.

We’ve taken a look at articles, tweets and predictions from every journalist we could think of, as well as BBC’s pundits, to see what the consensus has been so far on who should walk away with the award.

Only a football fan with a heart of stone, or an Arsenal supporter, could fail to enjoy watching Eriksen this season.

As a result Tifo Football editor Seb Stafford-Bloor gives his vote to the 26-year-old, writing: “So, what’s the basis: maybe it’s admiration. I admire Christian Eriksen, almost everything about him.”

We’re not going to disagree.

A number of players from Manchester City could realistically have been nominated for Player of the Year, but Sane got the nod from his peers alongside Kevin de Bruyne and David Silva to be on the shortlist.

And while he remains an outsider, the Germany winger is backed by the Daily Telegraph’s Alan Tyers, who writes: “He’s as exciting a player as we have had in England since Thierry Henry.”

It's really amazing how much of Man City's attack goes through Leroy Sané. A ton of responsibility at 22 but he's so good.

Like Sane, Silva remains an outsider for the award, although he has received plenty of wider plaudits for his impact on Manchester City since his arrival.

De Bruyne and Salah received the majority of votes, but Silva gets the nod from Daily Telegraph duo Jason Burt and Jeremy Wilson.

The main argument for Salah to win the award is simple: he’s scored a quite frankly ludicrous amount of goals.

The Egypt international’s departure from Chelsea was greeted by a host of shrugs in 2016, but he has returned to England as a fully-fledged superhero, tormenting defences and goalkeepers across Europe with glee.

Among the journalists and pundits to throw their weight behind Salah are Ken Early of the Irish Times, ESPN’s Mark Ogden, Alan Shearer, Chris Sutton, and (obviously) Mark Lawrenson.

It’s close. Very close. In fact, it could quite as easily gone the other way after The Times’ Oliver Kay admitting he would be tempted to change his vote to Salah after the past month.

But the Belgian just about edges it, with another Times writer, Matt Dickinson, also backing Manchester City’s midfield maestro.

He also gets a vote from Pat Nevin. Since he’s one of the coolest footballers ever, we’re more than happy to give Pat the deciding vote.