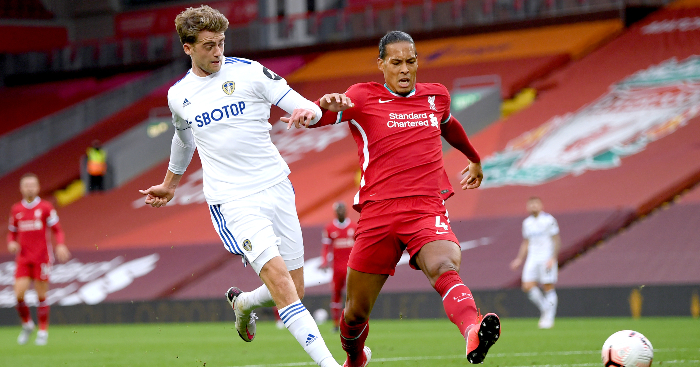 Liverpool began their title defence with three points at home to newly-promoted Leeds United on Saturday, but they didn’t look their usual selves at the back as they conceded three goals.

No Premier League side has conceded fewer goals than Liverpool over the past two seasons, a record in large part due to Virgil van Dijk being an ever-present at the back, starting every single game.

The Netherlands international was named the UEFA Men’s Player Of The Year in 2018-19 thanks to the role he played in Liverpool’s Champions League win, while he was no less solid last season as Jurgen Klopp’s Reds ended a 30-year wait for the title.

Earlier in the summer, Patrick Bamford’s name started trending on Twitter alongside Van Dijk – with plenty of jokes at the Leeds striker’s expense ahead of the prospect of coming up against the defensive rock.

But Bamford got the better of Van Dijk in Saturday’s match as he capitalised on a mistimed defensive clearance to slot home Leeds’ second equaliser at Anfield.

ESPN then tweeted that since the start of the 2018-19 season, “no outfield player has made more errors leading to goals in the Premier League than Van Dijk”.

Given his reputation, it was no surprise this caught attention, and social media being what it is, rival fans were quick to take the opportunity to take him down a peg. ESPN’s tweet received nearly 12,000 likes and was shared over 2,300 times.

But data analyst Dan Kennett has broken down why there’s no reason for Liverpool fans to be concerned.

This is a beautifully crafted banter stat. Absolutely world class wordsmithing to maximise banter whilst still being technically correct https://t.co/qRbs8V3wxV

He points out that:

– During that time Van Dijk has made a total three errors leading to the opposition scoring.

– He’s made four errors leading to opposition shots – 75% have been punished by goals.

– In contrast, Wolves’ Willy Boly has made nine errors leading to opposition shots – but none (0%) have resulted in goals. Leicester’s Jonny Evans has made seven, resulting in no goals, as did Tottenham’s Davinson Sanchez (leading to one goal – 14.2%).

– Van Dijk has made an error every 1801 minutes on the pitch. 184 players have made errors more frequently during that time.