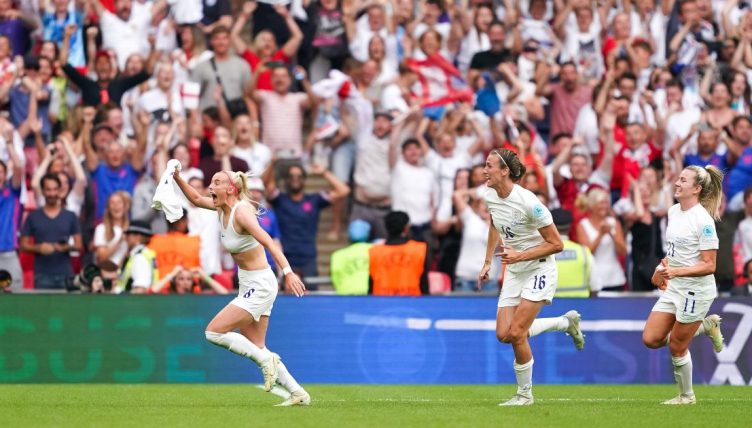 The 2022 Women’s Euros have ended but we’re still not completely over what a fantastic tournament it was.

Regardless of who you were supporting, football fans all across Europe got to witness an incredibly special competition that had remarkable goals, headline-worthy saves, and some scintillating football on display.

We enjoyed the Euros so much that we’re already attempting to relive it. Here are 18 iconic moments from one of the most exhilarating months of football we can remember.

England took on Austria in the opening fixture of the tournament, and the eventual winners managed to beat their opponents 1-0 in what was a nervy and tense victory, with Beth Mead’s goal the only difference between the two sides.

The best part, though, was seeing all different types of people come out and get involved right at the start of the tournament. Old Trafford is an iconic stadium, and seeing it filled with 68,871 people was special.

The attendance was a record in the competition’s history, with the previous mark being 41,301 during the 2013 final between Germany and Norway at the Friends Arena in Stockholm. However, it was short-lived due to the final at Wembley (more on which later).

Tonight's attendance is the 𝐋𝐀𝐑𝐆𝐄𝐒𝐓 in Women's EURO history 🤩

Off to a record-breaking start 🙌#WEURO2022 pic.twitter.com/gf91uk2Aba

There’s no question that Alexandra Popp is a legend of the game. A three-time Champions League winner, a five-time Bundesliga winner, and an Olympic gold medalist. Which is why it was so shocking that this tournament was her Euros debut.

She was injured during the last two editions, but she certainly made her mark on this one, scoring in every single match she played and equalling the record for most goals ever scored at a Euros alongside Mead.

Northern Ireland may have not been able to win a match at this tournament, but they were nevertheless celebrated for making it to the tournament in the first place – a first for their country.

Keep in mind that several of the players have other part-time jobs and that the team was only professionalised back in January to prepare for this competition.

The look on Julie Nelson’s face when she scored against Norway told you everything you need to know.

It was Norway's night, but we have two words for you…

Paris Saint-Germain captain Grace Geyoro was on a mission during France’s first match at this tournament.

She made it look so incredibly easy when she scored a hat-trick in the first half against Italy. It was especially remarkable given that she had just come back from injury.

Making your mark at the Euros? It was as easy as 1, 2, 3 for France's Grace Geyoro, who bagged a first-half hat-trick against Italy on Sunday.#BBCEuros #WEuro2022 #BBCFootball pic.twitter.com/dtlJUiT2kc

Now this was just completely unexpected.

England versus Norway was supposed to be the match of the group stages, the match that would decide who would top Group A.

Both incredible sides, with world-class players. I mean, we’re talking about a Norwegian team that has the inaugural Ballon d’Or Féminin Ada Hegerberg.

But this England team didn’t care. Eight goals meant that England surpassed their own record for the biggest winning margin at a Euros final tournament. Talk about going out and doing the business.

Russo was the ultimate super substitute during this tournament. She had scored in the Norway match (because which England player didn’t?), but it was against Northern Ireland that she really started to shine.

She came on, scored her first two minutes later, and then another five minutes later scored her second. It was a special goal, with Russo receiving the ball, spinning away from the defender, and getting the shot in.

After Sweden drew their first match against the Dutch, it was imperative that they won their second group stage game.

It wasn’t looking good for the Swedes, who conceded a goal two minutes after they scored against Switzerland. But Hanna Bennison certainly had something to say about that when the ball came to her at the edge of the box, and rocketed the ball into the far corner.

At 19 years old, she’s considered one of the best young talents in the world, and she certainly proved it against the Swiss.

Austria qualify for the quarter-finals

Austria against Norway was the final match of the group stage and was so important for both sides because a win meant a second-place finish in the group and a ticket to the quarter-finals.

It was a tough match, but Austria, the underdogs, were the ones that came out on top through Nicole Billa’s goal. And we all know no tournament is complete without a nice underdog success story.

England’s first major test of the tournament was when they fell behind to Spain in the quarters.

Ella Toone managed to pull one back just before the 90 minutes, and somehow, against all odds, Georgia Stanway unleashed a thunderous shot that sent the 29,000 fans at the AMEX into pure ecstasy.

WHAT A GOAL. this is definitely goal of the tournament. An incredible strike. pic.twitter.com/3wOAdQnN3G

France and getting knocked out at the quarter-finals has been the ultimate pattern the last few major tournaments. The last three Euros had France exit at the quarters, and France’s last two World Cups ended in the same fate.

So, the pressure was on when they faced off against the Dutch this time around.

Les Bleus were well on top for most of the match, but they were unable to convert their chances. Finally though, in extra time, Eve Perisset converted a penalty, sending the team to the semis and finally breaking the dreaded curse.

Late winners seemed to be a theme in the quarters, as Sweden spent 90 minutes pushing against a defensively solid Belgium side. It looked to be sure that the match would head to extra time, but Linda Sembrant somehow, some way scrambled home a goal from a corner.

Pure elation for Sweden, intense heartbreak for the Belgians.

We’re still not over this. We’ll never get over this. The cheek, the gall, and the audacity to pull off a backheel nutmeg goal in a semi-final.

If you didn’t rate Russo before this, then you certainly do now.

Another look at that Alessia Russo goal? Oh, go on then. 😍

England versus Germany at Wembley was always going to be a show-stopping event. But one of the most iconic moments was before a ball was even kicked.

There were 87,192 people there to watch the Lionesses take on the Germans, a UEFA tournament record. Talk about the ultimate atmosphere.

90,000 fans pack Wembley Stadium to watch England’s Women face Germany in final of Euro 2022. Whatever the score, Women’s football has been forever changed by this tournament. A generation of English kids will grow up only knowing the sport as Surging 🏴󠁧󠁢󠁥󠁮󠁧󠁿🏆 pic.twitter.com/CwdkXOobtd

After a goalless first half, both teams came out even hungrier in the second 45 minutes. In the 62nd minute, Keira Walsh’s penetrating through ball gave Toone the opportunity to go one-on-one with Merle Frohms, and somehow she held her nerve by dinking the ball over the Germany ‘keeper.

We shouldn’t be surprised. When she was told that Harry Kane was in awe of her goal, Toone simply replied, “Yeah, I taught him that.”

Ella Toone joked that she taught Harry Kane how to chip when asked about his praise during the #Euro2022 victory parade at Trafalgar Square.

Germany get back in it

Germany may have lost the final, but no one can discredit their fight. Despite England taking the lead, they fought hard and it paid off.

Lina Magull was able to beat Mary Earps at the near post after Tabea Wassmuth stuck the ball into the box.

Extra time comes along. Both teams are knackered, but they’re leaving everything on the pitch as they both search for a winner.

It was the Lionesses’ lucky day though as Chloe Kelly poked in a goal at the second attempt after a corner in the 110th minute. It was her first ever international goal and what a time to score it.

Then *that* celebration. Absolutely iconic stuff. 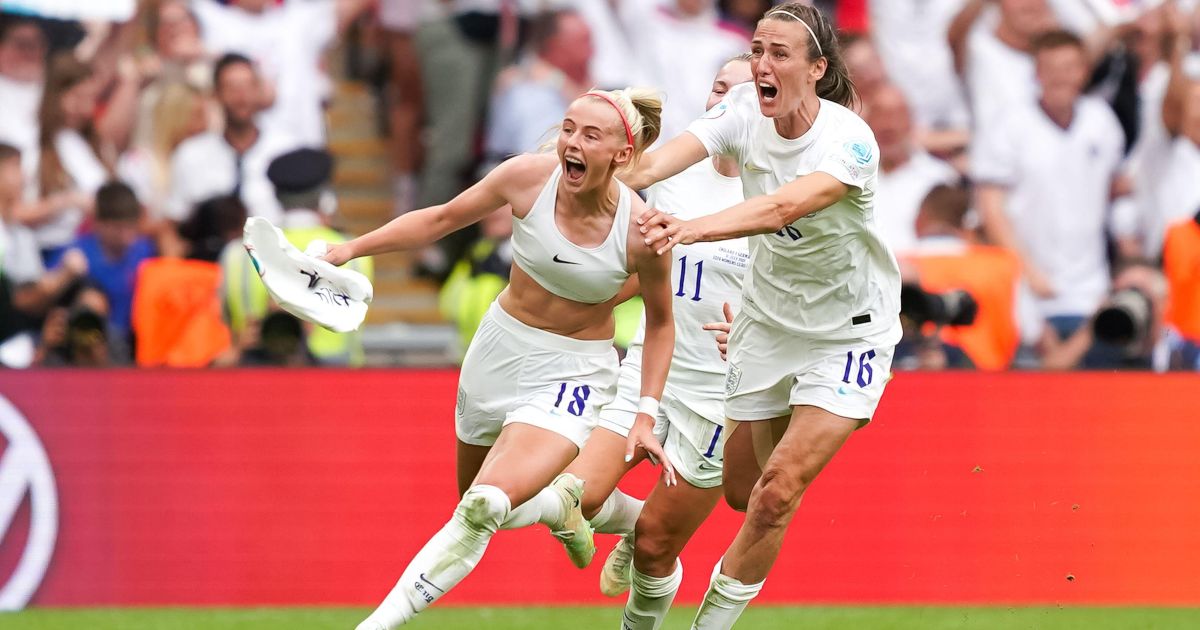 The visitors of course attempted to do everything they could to get back in it, so it made sense that some last minute tactics were involved. To communicate with her team, Martina Voss-Tecklenburg sent a piece of paper out on the pitch with some instructions.

Toone attempted to grab the paper while Russo hilariously tried to get a sneak peak even though the instructions were likely in German. We wonder how hard both were attempting to remember their GCSE German at that moment.

Germany had no answer for England in the dying minutes – thanks in great part to Chloe Kelly’s unbelievable ability to keep the ball in the corner – which meant that Kelly’s goal secured the Lionesses’ first ever major international trophy.

The hero was once again a substitute, and while it wasn’t an incredible goal, who cares?

The trophy lift and the celebrations after showed what it really meant to everyone involved.