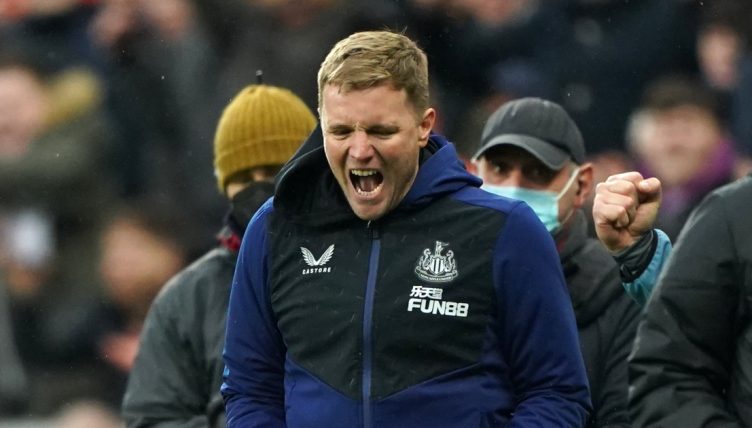 When Steve Bruce was relieved of his role as Newcastle United manager following the sale of the club by Mike Ashley, there were scenes of jubilation amongst the Geordie faithful.

A new era of promised big spending and better quality football had everyone at St James’ Park excited, but the big question remained of who was to take the team forward in the first managerial appointment under the new ownership.

Plenty of names were linked, and it then emerged that Unai Emery was the strong favourite, and had been granted permission by Villarreal to speak to Newcastle.

Everything seemed set for Emery to make a remarkable return to England after a failed 18 months at Arsenal, but the Spaniard turned down the role in favour of remaining in Spain, and Newcastle were back to square one.

Eddie Howe, who had been out of a job since leaving AFC Bournemouth in 2020, was then mooted as another strong candidate, and was announced as the new head coach on the 8th November 2021.

Howe had taken Bournemouth from League Two to the Premier League in his 12 years in charge over two spells, and the 44-year-old had earned plaudits for playing an attacking brand of football with the Cherries.

His appointment at Newcastle reunited him with Callum Wilson, Matt Ritchie and Ryan Fraser, who were some of the best players in his Bournemouth side, and his arrival has seen an instant uplift in fortunes.

He arrived on Tyneside with the team 19th in the Premier League and five points from safety, whilst playing some of the most mind-numbingly dull football in the country under Steve Bruce.

It’s never easy for a manager to take charge of a team embroiled in a relegation battle, but Howe has steered Newcastle to 17th place since he arrived, four points clear of the drop zone.

Whilst there is still a long way to go, the English manager has had a remarkably positive impact in a very short space of time, with the team picking up positive results and many players improving their own individual performances under his guidance.

Pundits have been quick to praise Howe for the job he’s been doing in improving the level of the players within the squad.

“That [improving players] is what you want from your manager,” Sue Smith told the Sky Sports Soccer Saturday panel. “Yes, you’re bringing in new signings but it’s also about the players that were [already] there.

“He is a fantastic manager and not only that but also a fantastic person,” the former Arsenal star stated.

“I am so happy he is here. I have a close relationship with him and we all trust him.”

We’ve identified some incredible stats from his first few months in charge which highlight the strong impact he’s had on the club.

– In 13 Premier League games under Howe, Newcastle have accumulated 17 points, which is the 11th best tally in the league.

– Howe has more than doubled Newcastle’s points per game, with a rate of 1.3 now compared to 0.5 before his arrival.

– Newcastle had picked up just five points in 11 games prior to Howe’s arrival in comparison, which had them in 19th.

– Joe Willock ended a run of 21 games without a goal with his first strike of the season coming against West Ham United under Howe.

Joe Willock is finally back in the goals for Newcastle!

His first of the season comes from a brilliant improvised finish 👌 pic.twitter.com/krmUAk6w4T

– Newcastle’s draw away at West Ham means they are now unbeaten in their last six Premier League games.

– This unbeaten run is only bettered by Manchester United, who are unbeaten in their last seven.

– Newcastle have conceded just four goals in this time, with two clean sheets.

-Newcastle had won just one of their first 19 games of the season, but now have three wins in their previous five matches.

-This means they have won as many points in their last five games as they did in the opening 19 (11).

-Under Howe, Newcastle won three consecutive Premier League games for the first time since November 2018 under Rafael Benitez after their 1-0 win over Aston Villa in February (Opta).

-Newcastle were winless in the league until their 1-0 win over Burnley in December 2021 under Howe, their 15th match of the season.

-Newcastle have the sixth-best home record in the league since Howe arrived, only behind Liverpool, Manchester City, Manchester United, Arsenal and Tottenham, and have just one defeat in that time.

-Newcastle have conceded 1.6 goals per game per Howe, a dramatic reduction from 2.2 before his arrival.

Can you name Newcastle’s top 35 goalscorers in Premier League history?