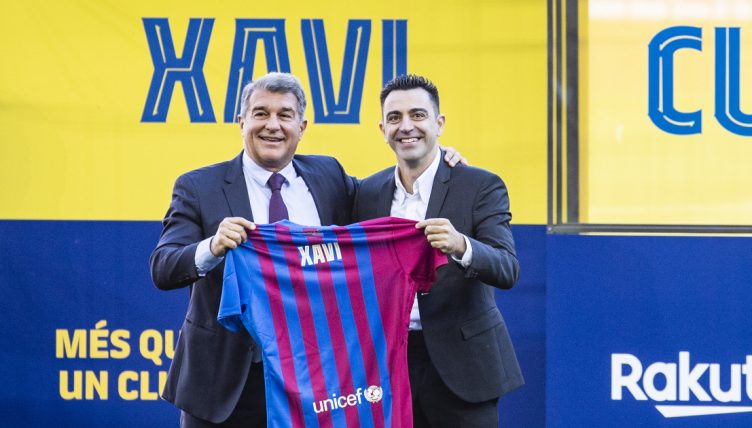 Barcelona legend Xavi is back at the Camp Nou and his appointment as the club’s new manager looks set to make waves in Spain and beyond.

Born and raised in Catalunya, the La Masia academy graduate went on to win everything there is to win multiple times over with his boyhood club. He was also a defining figure in midfield as Spain won two European Championships and a World Cup.

Staunchly ideological, Xavi has always preached the gospel of how Barcelona play and never been afraid to criticise opponents that he perceives don’t play the right way.

While he’s one of the most celebrated midfielders in the history of the sport, Xavi’s coaching career – at Qatari club Al Sadd – has gone somewhat under the radar so far. That’s set to change.

Here are 10 quotes from the man himself explaining how he sees football.

“We understand the game as a positional game, we can’t change our system,” Barcelona’s new manager said at his unveiling.

“We want to press high, we want to recover the ball in our opponent’s half, we want to be an intense team, we want to create chances. I am not discovering anything, that’s Barca’s DNA. An intense team, trying to give our all on the field and we are Barca and we have to try to win every single game.”

❝We are at Barça. Let me repeat it again — we cannot draw or lose games.❞

“It’s good that the reference point for world football right now is Barcelona, that it’s Spain,” Xavi told The Guardian in 2011, while Spain were world champions and Barcelona were about two win a second Champions League title in three years.

“Not because it’s ours but because of what it is. Because it’s an attacking football, it’s not speculative, we don’t wait. You pressure, you want possession, you want to attack. Some teams can’t or don’t pass the ball. What are you playing for? What’s the point? That’s not football. Combine, pass, play. That’s football – for me, at least.

“For coaches, like, I don’t know, [Javier] Clemente or [Fabio] Capello, there’s another type of football. But it’s good that Barcelona’s style is now a model, not that.”

This is Xavi's Al Sadd. Imagine Xavi's Barcelona. One my of favorite player returns home pic.twitter.com/D4rKrcpzQS

“I’m a romantic. I like the fact that talent, technical ability, is valued above physical condition now. I’m glad that’s the priority; if it wasn’t, there wouldn’t be the same spectacle,” Xavi explained in the same interview.

“Football is played to win but our satisfaction is double. Other teams win and they’re happy, but it’s not the same. The identity is lacking. The result is an impostor in football.

“You can do things really, really well – last year we were better than Inter Milan – but did not win. There’s something greater than the result, more lasting. A legacy. Inter won the Champions League but no one talks about them.”

The master of the game

“The one who has the ball, is the master of the game. That’s the school of Joan Vila, of Albert Benaiges, of Johan Cryuff, of Pep Guardiola.”

“For me, Johan has been the most influential person in the history of modern football,” he said. He’s (Cruyff) been the key person behind all of the successes at Barça over the last 20-25 years – and the national team.

“He came to Barcelona as a coach and changed the philosophy of our play: he instilled a system which is even taught today. Barca and the national team have grown out of Cruyff’s philosophy.”

Play in the opponents half

“It’s clear to me that my team has to have the ball,” Xavi told The Coach’s Voice. “I suffer when I don’t have it.

“It happened to me when I was a footballer and now even more now that I’m on the bench. That’s why I do everything I can to control the game through the ball, through possession.

“What interests me as a coach? To play as much as possible in the opponents’ half. If they press us high, the most important thing is to break the midfield line, go into the opposition’s half, and attack.

I’d be the same player today

“I don’t think I would change anything at all if I still played today. The 2020 Xavi would be on the same line than during my last years. Eager to play dominant football, associate with the other players, having vision,” he told France Football in 2020.

“I would do the exact same work. The game has changed, but not enough that the player I was no longer exists. I’d say I would be the same footballer who delivers similar performances.”

“My concept is very similar,” the 40-year-old, who is at the helm of Qatari outfit Al Sadd, told ManCity.com.

“Guardiola also wants to be dominant, he wants to have the ball, strong possession, lots of attacking movements… It’s ultimately about being proactive within the game.

“It’s about skilfully attacking the opponent in a certain way. In this sense it is not my idea.

“I’ve learned a lot with Guardiola, from the way he is, the ambition he has, the desire and passion that he feels.

“He’s a football-obsessed tactician and it has been a pleasure to be around him.”

"He'll be the one to continue the Pep Guardiola legacy"

Guillem Balague speaking in 2015 about the potential of Xavi being Barcelona manager. pic.twitter.com/C6EAs44Z9Y

An admirer of Klopp’s Liverpool

“The energy he [Klopp] gives off from the dugout and injects in the team is amazing. It’s admirable.”

“Real Madrid played like a small team in the Clasico at Camp Nou,” Xavi scathingly said, of Zinedine Zidane’s Real Madrid, back in 2016.

“Atletico coach Diego Simeone perfectly sets his team up to counter their opponents’ strengths, but I don’t like to see teams who shut up shop at the back.”

Revisiting the Barcelona Xl from Xavi’s final appearance in 2015