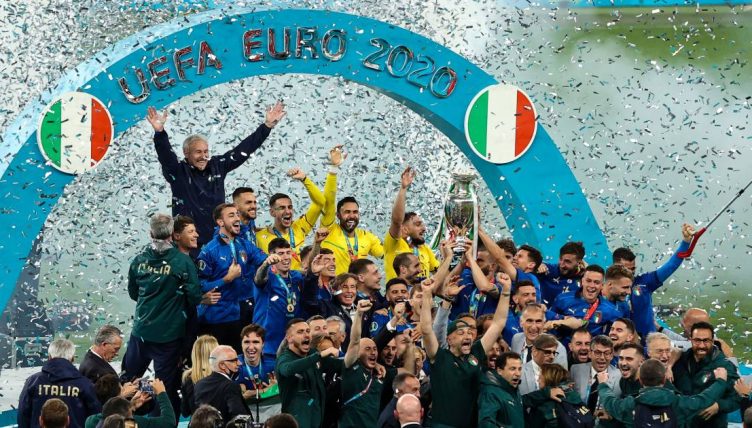 For England fans, it ended in heartbreak – another penalty shootout loss on the Wembley turf. For Italians, there was the delight of another major trophy 15 years after Fabio Cannavaro lifted the World Cup.

Whatever your footballing persuasion or national affiliations, though, the last month was special in so many ways as Europe emerged from 18 months of isolation into the warm glow of a gripping, emotional major tournament.

We’ve brought together the 28 moments that came to define a thrilling, sometimes upsetting and often brutal month of competition.

England’s Euro 2020 journey started under the dark clouds of our nation’s culture war, with pre-tournament friendlies marred by a substantial number of English people booing their own team for making a gesture to promote racial equality.

And in an attempt to get England united behind its team, Southgate penned a fantastic open letter in the Players’ Tribune.

“Our players are role models,” he wrote. “And, beyond the confines of the pitch, we must recognise the impact they can have on society. We must give them the confidence to stand up for their teammates and the things that matter to them as people.”

Opening ceremonies can be naff. This one, though, got the tone spot on. Quite short, relatively understated and featuring Andrea Bocelli singing Nessum Dorma while wearing a blue bow tie. What more could you ask for?

This was truly frightening. A moment to make an entire continent hold its breath. Playing against Finland, Denmark’s star man Christian Eriksen went down with nobody around him and we all sensed something was deeply wrong.

His heart stopped and he was, for a few horrendous seconds, clinically dead. But with a stunningly calm and collected response from the medical professionals on hand and his team-mates, who formed a human shield to protect his privacy, Eriksen survived.

This was a harrowing reminder that the game of football is merely the most important of the unimportant things. Life and health, on the other hand, is of true significance.

Denmark and Finland fans sing the name of Christian Eriksen inside the Parken Stadiumpic.twitter.com/TZCxMZJRHE

Goran Pandev. Thirty-eight years young. A first major tournament for a man who has led his nation for what seems like several millennia. And to top it off he scored on the opening weekend.

It may have been a scrappy, comic equaliser against Austria, but it was one of Euro 2020’s most beautiful goals.

What a moment for #MKD – their first goal at a major tournament! 🤩

This speaks for itself, doesn’t it?

A real Schick-ener for Scotland.

He moved two bottles of it off his table in a pre-match press conference, saying ‘water’ as he did, causing the internet to melt and a lot of usually reputable news outlets to publish that drivel suggesting his actions had made said fizzy pop’s manufacturer’s share price tumble. Bizarre.

Robbie Savage was going wild, screaming at the Wales players to keep the ball in the corner as they looked to see out their group stage win over Turkey. As is advisable in all instances, Gareth Bale decided to do exactly the opposite of what Savage wanted.

Here's how Connor Roberts sealed the win for Wales!

This was the own goal tournament – 11 of the 20 own goals in European Championship history happened in this one edition. When even Ruben Dias – Premier League winner and one of the most effective defenders in Europe – gets in on the act, you know things are bad.

This own goal was part of a defensive disasterclass from Portugal which set up a remarkable final day of Group eFfing mad.

After the Eriksen incident, Denmark went on to lose to Finland in a game that really shouldn’t have restarted before also succumbing 2-1 to Belgium in their second group game.

In the third and final match, Denmark needed to thump Russia to go through. They delivered, spectacular goals from Mikkel Damsgaard and Andreas Christensen setting up a 4-1 win.

It was pure catharsis, the bright lights of joy shining again after such a dark day the week before.

Denmark may be out but the football world thanks them for this moment. This goal from Andreas Christensen has to be one of the best moments of #EURO2020 pic.twitter.com/iWri1llNVy

I still can’t get over that performance from Luka Modric last night. Constantly two steps ahead of Scotland. We couldn’t get near him. Like he had a blinding aura about him. We were terrified of him and with good reason too.

The denoument to the group of death

The group of death that brought a tournament to life – and on the final day of action, we saw it all. A fantastic 2-2 draw between France and Portugal and a nail-biting game between Hungary and Germany that ended in the same scoreline after swinging this way and that.

The German fans also did themselves proud. After UEFA’s decision not to let the local government light up the Allianz Arena in rainbow colours before the game, the locals turned out wrapped in rainbow flags, sticking two fingers up at the governing body and Viktor Orban’s regime of intolerance.

This was part of the above madness, but it deserves its own section here.

Ronaldo, who had been in poor form for his nation, really turned it on once the tournament began, scoring five goals, the fifth of which took him level with Ali Daei’s record of 109 international goals. One hundred and nine!

The apple never falls far from the tree.

Regardless of the fact that Switzerland dumped France out on penalties, Pogba had a brilliant tournament, pinging passes across the football pitches of Europe with style and grace.

His best moment came on the training pitch though. This defies all logic.

This touch from Paul Pogba is the filthiest thing I’ve ever seen. 🪄 pic.twitter.com/ZQA0Yf5QFu

This will go down as the greatest day in European Championship history and is up there with the most exciting footballing days of all time.

Croatia v Spain followed by France v Switzerland, and we got a treat for the ages.

Just thinking about it leaves us breathless.

Kane had a slow start to Euro 2020. Then he got on the end of Jack Grealish’s cross to send England fans wild.

Dovbyk’s moment in the sun

A weird tournament for Ukraine, who reached the quarter-final without ever really playing their best. Still, Artem Dovbyk’s injury-time goal and wild celebration that gave Andriy Shevchenko’s side their round-of-16 win over Sweden will live long in the memory.

Ciro Immobile was stricken, lying on the floor wounded and in agony. Then Nicolo Barella scored, and he made a miraculous recovery. The absolute peak of shithousery, and we’re very much here for it..

After Denmark had beaten the Czech Republic to make it to the semi-finals, the Spurs midfielder and his Danish team-mates could not contain their emotion.

Another touching moment from a proud, resilient Danish side.

Hojbjerg broke down in tears after Denmark beat Czech Republic to reach the semifinals. The passion and love this man displays for the beautiful game is second to none. The Viking! 🇩🇰❤️pic.twitter.com/7jLbfCAlHY

On his sixty-third cap, Jordan Henderson headed home his first England goal to seal a magnificent 4-0 win over Ukraine. Dreamland for England and palpable joy from Henderson’s team-mates for a player who’s served his country with great distinction.

‘Has it ever been home?’

This question got the answer it merited.

🗣 "What would it mean to you guys to stop it 'coming home' tomorrow night?"

"Has it ever been home? Have you ever won it?"

Don’t worry, Bukayo Saka, our love for you will never be diminished.

We just cannot get enough of these @BukayoSaka87 images! 🤩 pic.twitter.com/ne4RLwwZtJ

After all the criticism of him in Spain, it felt like Alvaro Morata had earned redemption when he came on as a sub to equalise in their semi-final with Italy. Then he stepped up to take a penalty in the shootout and all his good work was suddenly undone.

Such psychodrama for the Juve striker. You’ve gotta feel for him.

Chiellini can get away with anything, can’t he?

Presented with the penalty to send his adopted nation Italy into the final of the Euros, Jorginho was ice cold.

The same approach didn’t work in the final, but Jorginho had a magnificent Euros.

His team-mate Gianluigi Donnarruma was handed the best player award, but we can’t help but feel the Chelsea midfielder was that little bit more important for Roberto Mancini’s side.

Fifty-five years after Geoff Hurst’s hat-trick goal against Germany in (sort of) the same stadium, Luke Shaw added his name to the very short list of Englishmen to score in major tournament finals.

What a goal it was too. Kane’s pass, Trippier’s cross from the right then the sweetest of contacts on the half volley from Shawberto Carlos. Unbridled joy – even if it didn’t last.

Still trying to come to terms with the fact that this actually happened.

Italy came back with the goal from Leonardo Bonucci, who also converted his kick in the shootout. Italy were deserving winners, taking the elegant silver trophy back to Rome for the second time.

Bonucci was delighted and ready to rub it in. Fair play.

Where are they now? England’s Xl from Gareth Southgate’s first game as boss