Can you name the Barcelona XI that won the 1992 European Cup final? 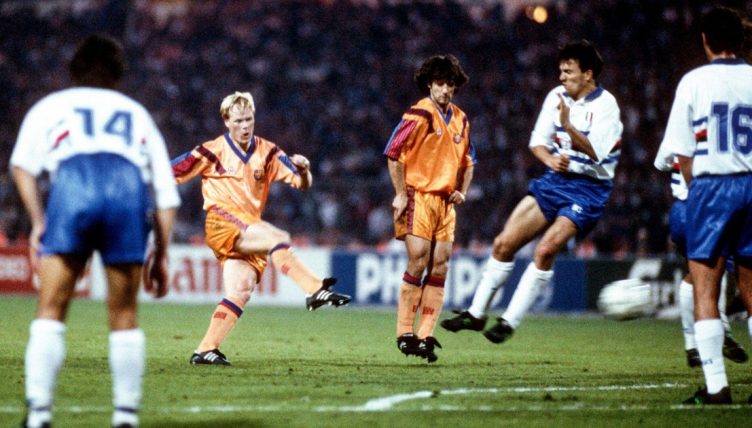 Barcelona may be one of the biggest clubs in world football but their first European Cup triumph came as recently as 1992. Can you name the starting XI from their 1-0 win over Sampdoria that year?

By 1992, Real Madrid had already lifted Europe’s most lauded trophy on six occasions but, as the Catalan side went into this final, no Spanish team had won it since Los Blancos’ last triumph in 1966.

Their previous final appearances, in 1961 and 1986, had both ended in defeat, and Barca remained in the shadows of their fierce rivals.

Johan Cruyff’s side faced tricky opponents in the Wembley final, too. While it was Sampdoria’s first appearance in the showpiece game of European football, Italian football was enjoying a purple patch and they boasted a strike partnership of Gianluca Vialli and Roberto Mancini.

The match was tight and tense. While Barca enjoyed the majority of possession, embodying Curyff’s mantra that “you play football with your head, and your legs are there to help”, chances were squandered by both teams.

With darkness settling over London, and the match having entered extra-time, a decisive free-kick was enough to give Barcelona a 1-0 victory and their first-ever European Cup.

Before lifting the trophy, Barcelona’s players changed from the orange away kits they’d worn during the match into their traditional Blaugrana home shirts.

It was a famous night for Cruyff and the club and we’re asking you to name Barca’s starting XI from the final. Our time to beat for this one is 04:11.