Can you name Brazil’s XI from their 2002 World Cup victory v England? 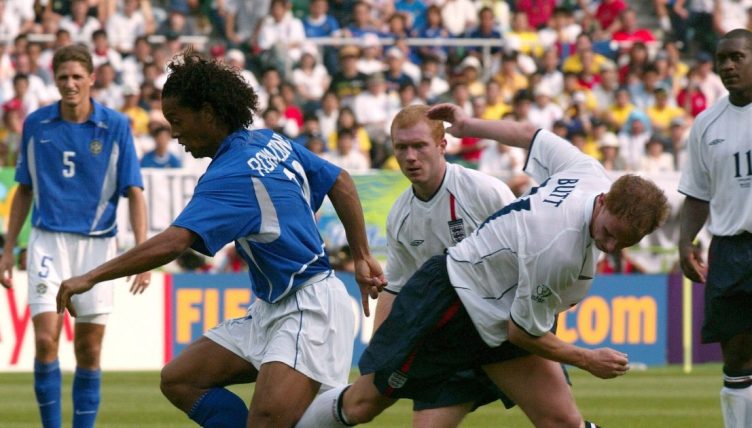 At the 2002 World Cup in Japan and South Korea, England were defeated by eventual winners Brazil in a classic quarter-final encounter, but can you remember the side that Brazil started with that match?

Responding to a first-half Michael Owen opener, Brazil levelled things up on the stroke of half-time.

Then in the second half one of the most iconic goals in World Cup history won the match for Brazil, with a certain Brazilian magician’s free-kick lobbing David Seamen and breaking English hearts.

There has been a long debate about whether the future Barcelona star meant that goal or whether it was a deep free-kick that went awry perfectly, with the Brazilian great seemingly changing his mind on whether it was done on purpose every few years.

But more recently he’s opted to claim it was a total fluke.

“No, it wasn’t on purpose,” the match-winner recently said.

“But we studied it a lot and we knew that the English goalkeeper – he kind of took the advance a bit.

“I was actually lucky enough that the ball entered the way it did. For the sadness of lots of English, and for the happiness of so many Brazilians.

“It was one of the most important goals. It’s certainly very remarkable because wherever I go, people ask me about it.”

But can you remember the Brazilian starting XI from that match? We’ve given you ten minutes to do it, and the time from the Planet Office office to beat is 00:56.

Plus once you’ve done that, why not see if you can try name every country to compete at a FIFA World Cup.