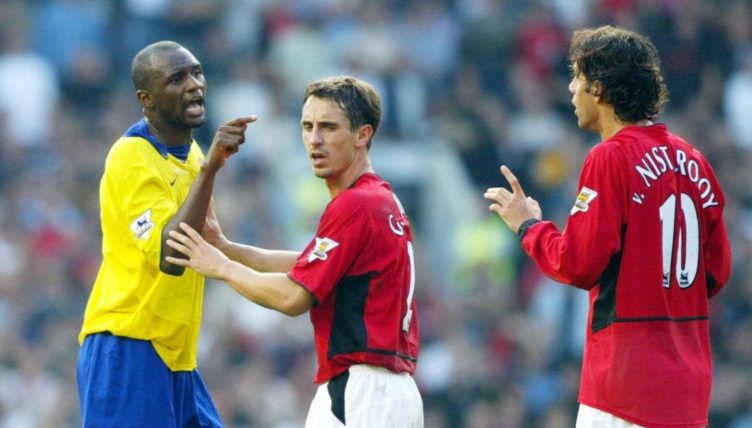 Arsenal’s 0-0 draw away to Manchester United in September 2003 is one of the most famous games in Premier League history. But how well can you remember it?

There might not have been any goals, but the fireworks ensured it lived long in the memory, coming to be known as the ‘Battle of Old Trafford’ – and one of just 12 Premier League games deemed worthy of its own Wikipedia page.

Can you name Arsenal’s XI from that afternoon? To jog your memory, they were controversially reduced to 10 men and conceded a late penalty. Ruud van Nistelrooy’s spot-kick hit the bar, a key moment in the Gunners going that season unbeaten.

You probably know what happened in the immediate aftermath of that penalty, but we’ll say too much more as it’ll give you one of the answers below for free and we’re far too mean to do anything as helpful as that.

We’re expecting decent efforts on this one, given it was near enough Arsene Wenger’s best XI in that legendary Invincible season. The time to beat from the office is a strong 00:52.

And if this gives you the taste for another quiz, then have a go at naming every player to appear for Arsenal in their Invincibles season.

NEXT QUIZ: Can you name Arsenal’s top 30 goalscorers in Premier League history?