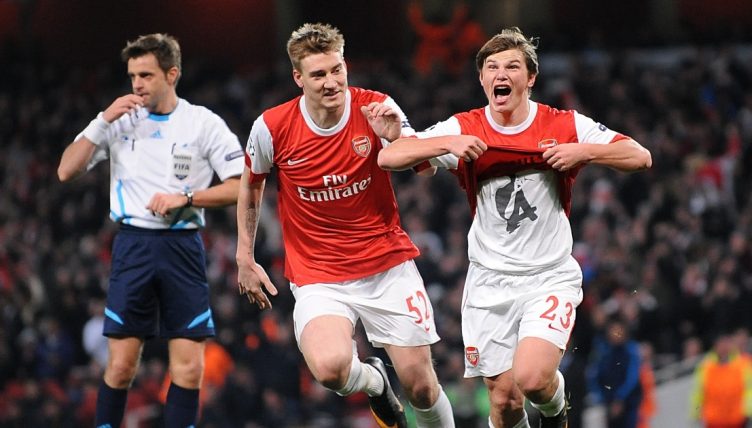 On February 16, 2011, Arsenal came from behind to secure a memorable win over Barcelona in the Champions League last-16.

Arsenal had been knocked out by Barcelona at the quarter-final stage in the 2009-10 season, losing 6-3 on aggregate after a brilliant display from Lionel Messi.

The Spanish side were favourites to go through again and took the lead at the Emirates when David Villa fired home in the 26th minute.

But Barcelona wasted chances to extend their lead and Arsenal’s No.10 smashed the ball past Victor Valdes in the 78th minute.

Substitute Andrey Arshavin then finished off a brilliant counter-attack five minutes later to give Arsenal a famous win and a first-leg lead.

“We stuck to what we wanted to do, and that – as well as our mental strength and togetherness – was dominant to our success,” Arsene Wenger said when reflecting on the game. “Nobody showed any sign of dropping their focus.

“It was a massive night because everything clicked. Our fans were fantastic – like the players, they refused to give in. It was a night to show the whole world how fantastic football can be.”

Barcelona did eventually go through after winning the second leg 3-1, but we want you to name the starting XI that Wenger chose for the first leg.

If this puts you in the mood for another challenge, why not have a go at naming Arsenal’s 20 youngest Premier League debutants?

You’ll need to sign up to Starting 11 below to play the quiz and completing it will also put you on our weekly Starting 11 leaderboard. You can access the leaderboard via the dropdown menu on the quiz below. The time from the office to beat is 02:18.

Can you name Arsenal’s XI from Arsene Wenger’s last match as boss?