Can you name Barcelona’s XI from the 1997 Cup Winners’ Cup final? 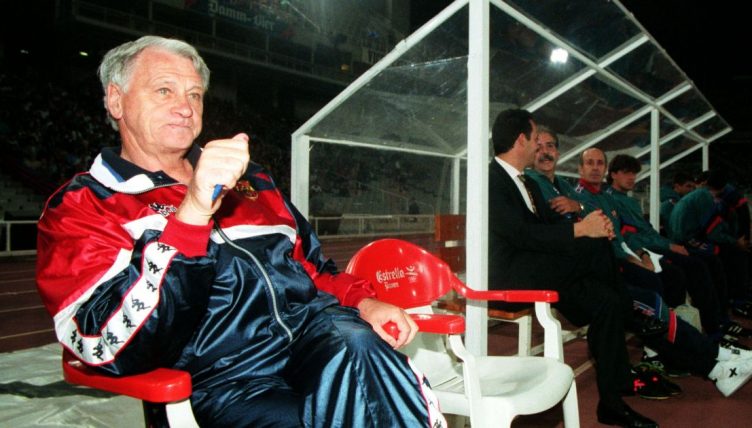 A classic Barcelona team led by Bobby Robson won the Cup Winners’ Cup in 1997 with a 1-0 victory over Paris Saint-Germain. Question is, how well do you remember that team?

Robson had arrived to take over as Barcelona manager at the beginning of the 1996-97 season, winning the Supercopa de Espana in his first game in charge of his new club.

But things had been rocky in the middle of the season and at times, the press and a section of Barca fans had been calling for the English coach to be fired.

Robson and his team managed to fight back, however, eventually winning two more trophies – the Copa del Rey and the Cup Winners’ Cup.

The latter came with a 1-0 win over French side Paris Saint-Germain at Feyenoord’s De Kuip Stadium in the Netherlands.

The winning goal came from Barca’s star striker, who converted from the penalty spot after future Bolton hero Bruno Ngotty had brought him down in the penalty area.

That striker scored 47 goals that season and in his 1998 autobiography, Robson wrote: “He is strong and quick over 50 metres, has a side-step that is lightning quick with the ball at his feet, and he can shield the ball, turn and beat defenders in the twinkle of an eye.

“He has the talent and temperament to not just be the best in the world but maybe even the best ever. As good as Pele and I cannot go any higher than that.”

You can probably guess who Robson was talking about there. But what about his 10 team-mates that Robson sent out alongside him to start the Cup Winners’ Cup final?

The time to beat from the Planet Football office is 01:15. And if you fancy another Barcelona brain teaser after this, then have a go at naming all the club’s 15 youngest La Liga goalscorers since 2000.