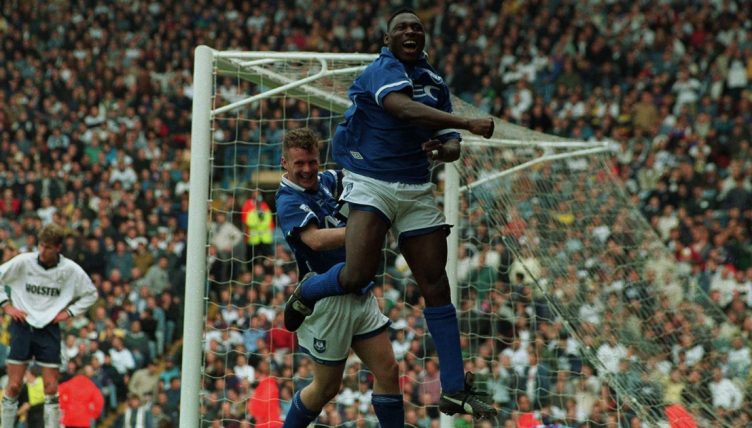 Everton fans still reminisce about their 1995 FA Cup-winning side – and it remains the last Everton team to win a piece of major silverware. But can you name the starting XI that thumped Tottenham 4-1 in the semi-final?

Spearheaded by Jurgen Klinsmann, Spurs were favourites for the match at Elland Road after knocking out Liverpool in the previous round.

In fact, Henry Winter wrote that Everton had been “depicted as underdogs against the pedigree pooches from White Hart Lane.”

But Joe Royle’s side rose the occasion, battering the Spurs goal from the first whistle and taking a deserved lead through one of their stalwart defenders.

And Everton continued to pressurise their opponents with an intelligent and energetic display. They were 2-0 ahead just after the interval before Klinsmann pulled a goal back from the penalty spot.

Many sides would have been rattled, but not Royle’s Everton. Daniel Amokachi, signed following his impressive displays for Nigeria at USA ’94, rose from the bench to score twice and send Everton to Wembley.

All Toffees fans will remember their victory over Manchester United in the final but we’re asking you to name the starting XI that demolished Spurs on an overcast afternoon in Leeds.

If this gives you a taste for another challenge, why not try and name Everton’s top 30 appearance makers in the Premier League era?

The time to beat from the Planet Football office is 03:51.