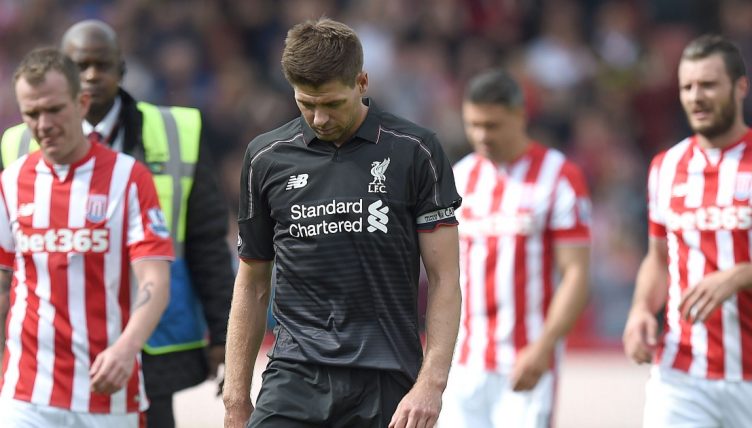 Steven Gerrard is undoubtedly a Liverpool legend, but he didn’t get the goodbye he was hoping for; the long-serving club captain’s final appearance for the club was a shocking 6-1 defeat away to Stoke.

We’re asking you to name the starting XI that Brendan Rodgers went with on that occasion, the final match of an underwhelming 2014-15 Premier League campaign, in which the Reds finished sixth.

Gerrard continued playing over in MLS at LA Galaxy, while the writing was on the wall for Rodgers – he was sacked five months later, while successor Jurgen Klopp ushered in a grand new era at Anfield.

Mark Hughes’ Potters were on fire that afternoon at the Britannia Stadium, going five goals ahead by half-time, with Mama Biram Diouf scoring twice in the opening half-hour.

In a ​Q&A with Stoke Sentinel, Stoke defender Ryan Shawcross has now revealed what happened when the Potters headed back to the dressing room.

He said: “​Stoke City 6-1 Liverpool. We were five up at half-time and when we went back to the dressing room nobody said a word.

“I’ve never known anything like it at half-time, 5-0 up. The manager [Mark Hughes] walked in and didn’t know what to say. We just burst out laughing.”

It wasn’t a vintage Liverpool XI, but Gerrard – who was the closest thing to a recognised striker in Rodgers’ 4-3-3 – was one of several big-name players on the visitors’ teamsheet.

And we’re asking you to name the XI in a quicker time than the 01:42 we managed from the Planet Football office.

If you’re looking for another challenge after this, why not have a go at naming Liverpool’s top 30 goalscorers in Premier League history?

NEXT QUIZ: Can you name Liverpool’s XI from Jurgen Klopp’s first game in charge?