Can you name Uruguay’s XI from their 2010 World Cup QF vs Ghana? 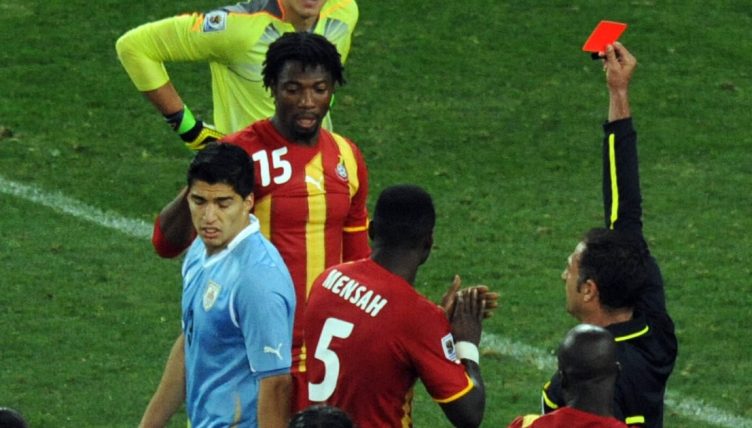 South Africa 2010 was one the poorer World Cups in recent memory – but it served up a doozy of a quarter-final between Uruguay and Ghana.

With an unexpected semi-final place at stake, both countries contributed to a memorable match in the cavernous Soccer City stadium.

Sulley Muntari gave the Africans a deserved lead with a long-range pinger before half-time only for Uruguay to equalise through the player that would later be named the best player at the 2010 World Cup.

A tense hour followed and the scores were level at 1-1 deep into extra time when a certain Uruguayan striker committed one of the most infamous acts of villainy of World Cup history.

Asamoah Gyan missed from the subsequent spot-kick, sparking wildly contrasting scenes from the Ghana and Uruguay players, before the South Americans went on to win the penalty shoot-out 4-2 – eliminating the neutral’s favourites from the competition in the process.

The handball perpetrator became a household name for all the wrong reasons as millions mourned Ghana’s exit. Uruguay went on to lose their semi-final against the Netherlands but their 2010 legacy centres around this match.

We’re asking you to name Uruguay’s starting XI from the match in July 2010. It’s a mix of household names and ones less familiar, so good luck getting a quick time here.

If this puts you in the mood for another World Cup-related challenge, why not try and name Brazil’s XI from the 2002 final win against Germany?