Can you name the Portugal XI that lost the Euro 2004 final to Greece? 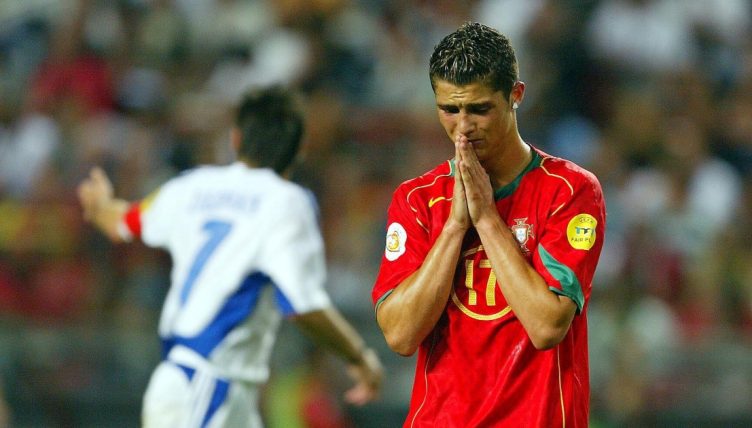 Portugal were favourites to win their first major international trophy before the 2004 European Championship final against Greece – but fell to a shock 1-0 defeat. Can you name their line-up from that defeat?

After beating Spain to the hosting rights for Euro 2004, Portugal set about putting on the biggest European Championship to date.

Ten stadiums were built or refurbished for the tournament and, with World Cup-winning manager Luiz Felipe Scolari in charge, the national team were confident of success before a ball was kicked.

But Portugal faced an early reality check; Greece beat them 2-1 in the opening game and only nervy victories over Russia and Spain ensured Portugal didn’t suffer a humiliating group-stage exit.

After shuffling his pack during the tournament, introducing some of Porto’s Champions League winners to the starting XI and dropping some elder statesmen, Scolari’s side grew in confidence.

England were beaten on penalties in a dramatic quarter-final, while the Netherlands were swept aside in the semi-finals in front of a buoyant home crowd. Suddenly, Portugal were the favourites to lift the trophy – but Greece stood in their way.

In front of a sell-out Estadio da Luz in Lisbon, Portugal never got going in the final. Having stifled their fancied opponents, Greece took the lead through a poacher’s header from Angelos Charisteas and held on to secure an improbable victory.

Portugal had blown it and their players left the field in tears. But can you name the starting XI from their massively anti-climatic defeat in the Euro 2004 final? The score to beat from our office is 02:21.

And, if you fancy another challenge, why not try and name every manager to have won the Champions League?