Can you name Real Madrid’s XI from their CL win vs Barcelona in 2002? 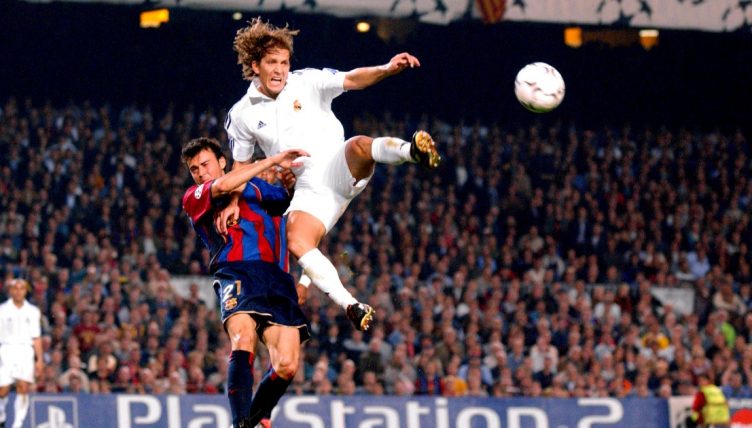 On April 23rd, 2002, Real Madrid took a giant leap towards the Champions League final with a 2-0 victory away to old rivals Barcelona. How well do you remember that side?

A Clasico for the ages on the European stage, Los Blancos arrived at the Camp Nou with everything on the line.

It had been an underwhelming season for both sides, who finished third and fourth respectively in La Liga that season, behind champions Valencia and runners-up Deportivo La Coruna. It was make-or-break when they were drawn against one another in the Champions League semi-finals.

Carles Rexach’s Barcelona lined up with the likes of Luis Enrique, Marc Overmars and Patrick Kluivert, but the visitors proved too strong in the first leg – they took a two-goal lead back to the Spanish capital.

A certain legendary midfielder broke the deadlock for Madrid, while Steve McManaman came off the bench to score their second in injury time. We’re asking for the starting XI, though – and the score to beat from the Planet Football office is 02:05.

Madrid ultimately completed the job with a 1-1 draw in the second leg, while a 2-1 victory over Bayer Leverkusen in the final meant that Madrid lifted the ol’ big ears for a third time in six years.

If you’re looking for another challenge after this one, why not try name Madrid’s top ‘not Cristiano Ronaldo’ scorer every season since 2000?