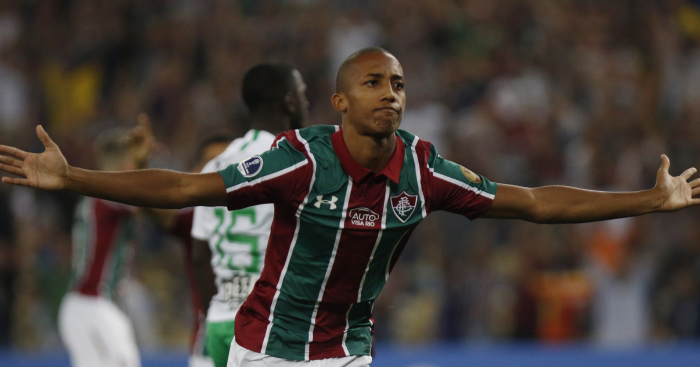 If a week is a long time in football, then the past 10 days must have felt like the best part of a lifetime for Fluminense’s João Pedro.

On Sunday, the 17-year-old scored his eighth goal in his eleventh professional game to complete a vertiginous rise from relative unknown to Brazil’s next footballing superstar.

His effort against Bahia – a poacher’s finish after the ‘keeper had saved a Paulo Henrique Ganso free-kick – was not enough to win the game for 10-men Flu, but it means the 17-year-old now has seven goals from 11 shots in his last 216 minutes on the pitch.

That’s a better start to his career than Neymar, Gabriel Jesus, Vinicius Jr. or even Ronaldo Fenômeno.

And, like all the best Brazilian talent, he’ll soon be off to the bright lights of one of Europe’s five big leagues.

Well, maybe. We’ll return to that later. First, let’s have a closer look at his truly incredible 10-day spell.

It started with a late appearance off the substitutes bench against Cruzeiro in the Brazilian Cup. With his side 1-0 down, João Pedro came on in search of an equaliser and found it in the 94th minute to send the Maracanã into raptures.

Three days later, he was at it again, coming off the same bench in the same stadium against the same team, only this time in the league. He was also given a little longer to shine – being introduced with 20 rather than six minutes to play – and he took full advantage of that extra time.

His first, to make it 3-1 in the 84th minute, showed some intelligent movement to get in front of his man, but it was the second that really caught the eye.

Completing the rout 30 seconds from time, João Pedro picked up a loose ball on the edge of the area, turned, skipped away from two Cruzeiro midfielders, took a touch past South American football’s best centre-back, Dedé, and rifled a low shot into the corner of Fábio’s net.

Now Brazil sat up and took notice. With three goals in two cameo appearances, he had effectively guaranteed himself a starting berth in the next game, a difficult Copa Sul-Americana tie against Colombia’s Atlético Nacional.

But surely it couldn’t get any better than those explosive substitute displays.

Then, just 120 seconds into his first ever professional start, he leapt above the Nacional defence to calmly head Yony González’s cross into that same corner he had hit the Sunday before. Five minutes later, he latched onto Daniel’s delightful through ball before a little left-footed dink lifted it up and over the ‘keeper, hitting the Maracanã net once more.

The two chances were utterly unalike, requiring different skill sets and completely contrasting types of movement. Most teenagers would have frozen in his position, yet the way João Pedro finished both of them off made him look like a seasoned pro.

Before the break, he had completed his hat trick. Deciding this scoring-important-goals-in-vital-continental-club-games malarkey was getting far too easy, he played a one-two with the post to spice things up before tapping in from five yards.

It was not just the unerring accuracy of his finishing on display either. He had already provided a wonderful cross for Luciano to score Fluminense’s third and was constantly dropping deep or running out wide to pick up the ball.

Fernando Diniz, the Tricolor manager, is doing a wonderful job getting a young, cheaply assembled side to play some exciting attacking football and has clearly filled João Pedro with the confidence to go and do what he does best.

No sooner have they got not know him, though, than Fluminense fans will be having to wave goodbye to their new hero.

Watford went back to the mine that had given them Richarlison and it looks like they have unearthed another gem. And Fluminense, a club desperately strapped for cash, settled for the first offer that came their way.

The fee, reportedly €2.5million up front with €7.5million in performance-related add-ons, is derisory compared with the combined €90million that Real Madrid paid for Vinicius Jr. and Rodrygo. But the need for instant cash prevailed.

This, though, might not be the end of the story. In the contract that Fluminense signed with Watford – which until João Pedro turns 18 can only be an agreement to sell rather than the outright purchase of the player’s rights – there is a clause that stipulates that Fluminense can pay the Hornets €20million to renege on the deal.

This chink in the contract has awoken the attention of Europe’s upper echelon of clubs, with Liverpool the most prominent among those mentioned. If they made Fluminense an offer that could cover the fine for going back on the agreement plus a little bit more than the fee Watford are currently paying, João Pedro could be nicked from under Javi Gracia’s nose.

Watford fans, then, have a dilemma on their hands. They want João Pedro to keep scoring, but the more he does, the more likely he is to tempt one of Europe’s wealthy elite to trigger that clause.