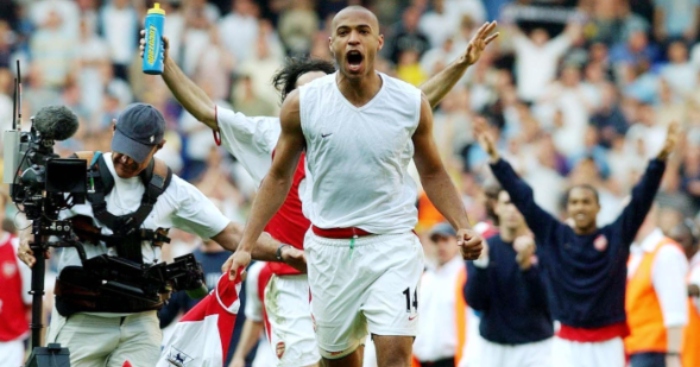 Thierry Henry was truly one of a kind. There are few players in Premier League history who had anywhere near the same aura as the French international, while his pure talent was simply undeniable.

His numbers speak for themselves, as he is Arsenal‘s record goalscorer, but it is the way Henry got those goals and conducted himself on the pitch that has helped him become a legend.

The man who made the No.14 famous was able to glide past opponents and nonchalantly finish off his chances, with there being so many examples to show that.

Think of the run and finish against Tottenham that led to the knee slide so iconic it could put any Kylian Mbappe celebration to shame. Think of his effort that left pretty much the whole Liverpool team helplessly watching him beat them before putting the ball in the net. Think of him making Real Madrid look like a bunch of schoolboys.

Plenty of other examples come to hand, and it turns out you can add some goals from when he was 12 years old to the list entitled: Thierry Henry destroys his opponent with style.

The Frenchman will have had to work tirelessly on his craft to reach the level he did, but this video shows that his style on the pitch was a natural God-given gift.

For the first goal, he showed the raw pace to get behind the defence and latch onto his teammate’s clipped pass, as well as the composure and technique to slot the ball into the bottom corner.

Like a kid using a rapid striker on FIFA, his teammates sent a ball in behind again, with Henry making no mistake this time either, as he left the opposition defenders in his wake before dinking the ball over the goalkeeper’s head with ease.

Then there are the celebrations. He looked towards the crowd with his arms out wide, while he also had a crowning moment for himself. All of this mirrors what he went on to do in Premier League grounds across the land.

He was so young here, so it is pretty incredible to see the likeness to his grown-up self, who was such a formidable opponent to so many.

So, to the kids who were torn apart by the No.9 on the day, don’t worry, he’s done it to the best defenders in the world.