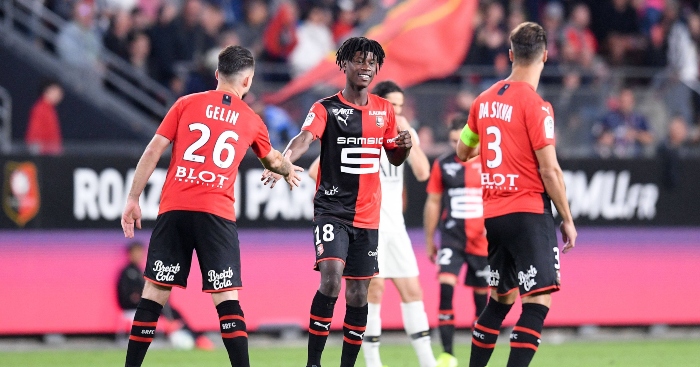 Being 16 years old can often feel like being trapped in some kind of Inbetweeners-esque purgatory; too young to get served in pubs, depending on the standards of your particular local at least, and too skint to do anything particularly productive or fulfilling.

It was usually on our return to the park that I would down a bottle of Lucozade (other heavily caffeinated energy drinks are available) and spend the next 10 minutes frantically covering more ground than N’Golo Kante before starting to feel so sick I would eventually end up writhing on the floor in distress. This happened every time, without fail, and would often coincide with me wondering why girls at school didn’t fancy me.

Eduardo Camavinga isn’t your ordinary 16-year-old (that is, if we take heads-and-volleys-too-much-Lucozade-existential-crisis as ‘ordinary’).

Born in Angola, Camavinga is rapidly becoming the hottest prospect in French football. On Sunday, he started his third consecutive game for Rennes and was named Man of the Match after starring in their 2-1 victory over PS-fucking-G.

It’s less than a year since Camavinga became the youngest ever professional in the club’s history, breaking into the first team to make seven appearances, including four starts, at the end of 2018-19.

Such was his impact, Rennes rewarded him with a new contract nine months after signing his initial pro deal, although it already feels like a matter of ‘when’ and not ‘if’ he follows in the footsteps of the likes of Ousmane Dembele and Abdoulaye Doucoure in moving on to bigger things.

Fully established in Julien Stephan’s side, Camavinga has completed the full 90 minutes in Rennes’ opening three fixtures of the season, including the 2-1 defeat to PSG in the Trophee des Champions, France’s Super Cup. 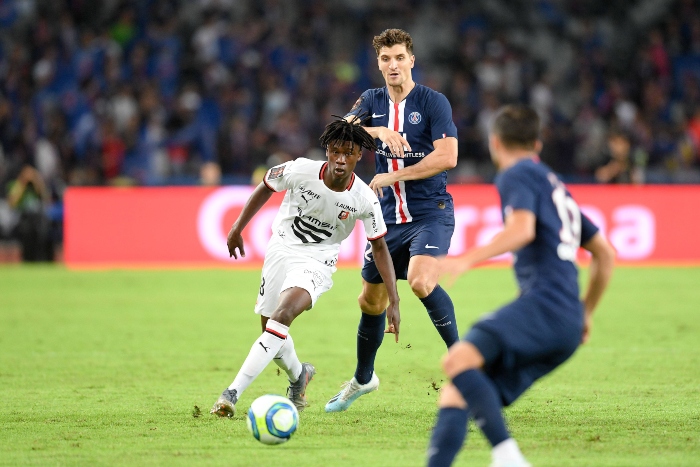 But it was his second appearance against PSG in which Camavinga truly announced himself. Tasked with the key role of anchoring Rennes’ midfield, no player for the hosts enjoyed as many touches or made more tackles than the boy born in 2002. No player on the entire pitch recorded a better passing accuracy than his 97.6%.

While his early touches were somewhat tentative, working his way into the game by safely ensuring he recycled possession, Camavinga gradually became more confident and increasingly influential; breaking up play, driving forward and looking for options to pass to further upfield rather than sideways or backwards.

“This is the first time I’d seen a player with such qualities,” Jo Burel, who coached Camavinga at amateur club AGL-Drapeau Fougeres, has previously said. “When we wanted to maintain a result, we put him in defence, if we needed a goal, we would put him in attack. He had the ability to do both.”

Just after half-time against PSG, Camavinga produced his headline moment, playing a perfectly weighted lofted pass into the path of Romain Del Castillo, leaving the striker with a simple header to bag the winner against the reigning champions.

The 16-year-old put on a stunning display against PSG last night, including this utterly sublime assist for the winner!

Given his age and position, Camavinga’s display was reminiscent of Reece Oxford’s Man of the Match performance as a 16-year-old in West Ham’s 2-0 win at Arsenal on the opening day of the 2015-16 season.

Oxford’s subsequent struggles to live up to the hype should serve as a warning that the potential of such players as Camavinga must be viewed with caution, but reports suggest he has all the right qualities to continue developing in the right manner.

“He has a certain modesty and doesn’t have a big head,” former coach Nicolas Martinais told Goal. “He knows where he comes from and what his family has been through.”

Meanwhile, his manager Stephan has said: “Many of the pros have taken him under their wing because he is very respectful in the dressing room and very attentive to their advice. He blossomed with us this summer.”

With the world at his feet, Eduardo Camavinga isn’t your ordinary 16-year-old. He just needs to stay off the Lucozade.