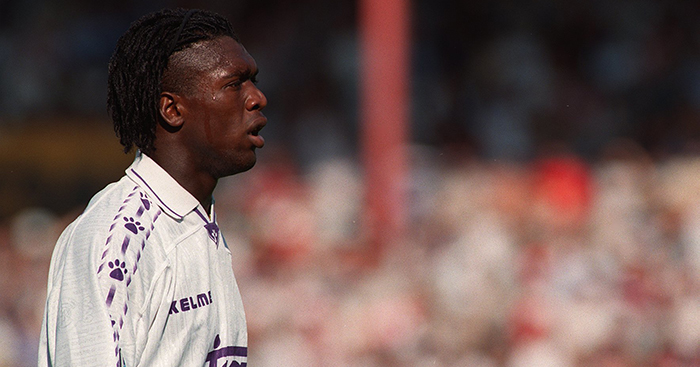 Clarence Seedorf’s rocket against Atletico Madrid is one of the most re-watchable goals ever. Souza thought he’d try it himself.

Throughout football history, a handful of players have taken it upon themselves to score perfectly re-watchable goals.

You know the sort: Beckham against Wimbledon, Roberto Carlos against France, Van Persie against Charlton… These players might not have fully understood GIFs back in the day, but they must have had an inkling.

Clarence Seedorf is another player to have scored one.

His 45-yard screamer for Real Madrid, an equaliser against Atletico Madrid in the opening game of the 1997-98 season, is so impressive it barely looks real.

You can picture the goal clearly in your mind. The casual collecting of the ball in no man’s land. The dink forward to accommodate the run-up. The skip and rapid acceleration to pick up pace.

And then, in no time at all, Atletico keeper José Molina is… facing his own goal.

So ludicrous is the idea of saving this shot, all the Spaniard can do is jog in the vague direction of its trajectory. At no point do Molina’s hands reach above shoulder height. The ball has gone. There will be no stopping it.

But while you and I might spend a few minutes watching, rewinding and rewatching Seedorf’s historic strike, others have absorbed the mesmeric goal in different ways.

In Japan this week, 31-year-old Souza, a Brazilian defensive midfielder playing for Cerezo Osaka, decided not to re-watch the Seedorf goal, but to re-enact it.

It was a brave, irrational and potentially stupid thing to do. In the end, however, it was absolutely magnificent.

The J.League Cup, established in 1992 and sponsored by a food product called ‘Yamazaki Biscuits’, is the Japanese equivalent of the League Cup.

This Wednesday, 16 clubs played the final matches of the competition’s group stage, and there was plenty to play for in group C, with the winner of Cerezo Osaka versus Oita Trinita set to qualify for the next round.

Cerezo journeyman Souza, who has played for a host of Brazilian clubs (Palmeiras, Cruzeiro, Santos, Bahia…) while being loaned to death like a ginger Patrick Bamford, went into the match with one goal to his name this season.

Quite what compelled him to do what he did is a mystery.

Maybe it was the comfort of a 1-0 lead. Perhaps it was the stature of the competition. Or maybe it was the feeling of being a talented Brazilian playing around moderately talented team-mates in Japan.

Whatever motivated him, it was certainly worth it.

Like all fine things in life, the goal started with a shimmy. Facing his own half, near the halfway line, Souza dummied a pass to his right-back before rapidly snapping the ball in the other direction.

In getting the ball out of his feet with such skill, this part of Souza’s goal was perhaps better than the original.

Where Seedorf’s measured tap, unmarked and in silly amounts of space, was functional and effective like Nine Inch Nails’ version of ‘Hurt’, the Souza shimmy was all Johnny Cash: clean, heartfelt, unforgettable.

And then… the shot.

Because of camera angles and varying pitch sizes, it’s hard to precisely compare the distances of Seedorf’s strike and Souza’s.

At a guess, however, Souza is perhaps 10 yards further from goal, taking into account both the longitudinal and latitudinal difference.

Despite this disadvantage, Souza’s strike is actually hit with less power than Seedorf’s.

The burst of acceleration is the same, the trajectory is the same, only there’s clearly less of a follow-through in the Brazilian’s thwack. He cuts across the ball, low to the ground, then plants his striking foot down; Seedorf comparatively throws himself at the ball.

The brilliant and eternally watchable element of Souza’s goal — and the part that so closely mirror’s Seedorf’s — is the impossibly straight movement of the ball from the regular camera angle. Is it the wind? Or has somebody doctored the footage?

Only, just like the Seedorf goal, this straightness is revealed to be a trick of perspective when seen from the reverse angle.

Seedorf’s seemingly arrow-like shot actually takes a devious bend not long after it leaves his foot. Souza’s, too, arcs tantalisingly away from the hapless goalkeeper, the perfect outside-foot spin making possible what distance is attempting to make impossible.

At least the keeper jumps for it though.

On that note, a quick word on William Popp, the 24-year-old Japanese (half American) goalkeeper making just his 10th professional appearance in this critical J.League Cup fixture.

Full disclosure: Popp, born 21 October, 1994, is not the first-choice goalkeeper for Oita Trinita.

That position is occupied by 30-year-old Shun Tagaki, who has conceded seven goals in his 12 league appearances this season. In that dozen, he has kept an impressive five clean sheets.

The backup keeper has played just 10 professional games in his short career, conceding 25 goals, and he is currently at Trinita on loan from Kawasaki Frontale, his third such loan in four seasons. (In some ways, he and Souza are kin.)

More relevantly, however, Popp did this in the first half of Wednesday’s match:

Yes, that is Souza taking the free-kick. Yes, it may have influenced his decision to shoot from 55 yards an hour later.

Souza’s goal will not go down in history as Seedorf’s has.

At best, it will be hurriedly tacked on to a ‘Best Long-Range Goals HD’ YouTube video, whose uploader will forget about the source material, leaving a handful of viewers to wonder about the scorer’s identity.

It is, nonetheless, a frankly perfect homage to the Dutch master.

“That goal against Atletico brought prizes, including 250 bottles of wine,” Seedorf told FourFourTwo in 2011. “Considering I am teetotal, imagine how many parties I had to throw to get rid of it!”

If he has a heart, he should send a bottle to Souza, his biggest fan and worthiest disciple.