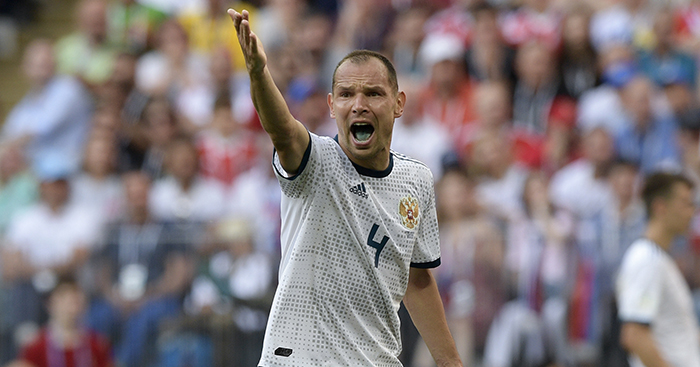 Sergei Ignashevich, Russia’s most capped player, has retired. His contribution to the 2018 World Cup was as impressive as it was entertaining.

He wasn’t even supposed to be there. At 38 years old, Ignashevich had been almost two years retired from the international game.

It was only an injury to Rubin Kazan’s Ruslan Kambolov that created an opening for a centre-back in Russia’s World Cup squad.

“Of course Cherchesov’s proposal came as a surprise,” Ignashevich said. “[But] I considered it would be right to consent to participate in the World Cup that will take place in our country.”

Despite being a late addition to the squad, Ignashevich played every game and every minute of Russia’s World Cup campaign — including consecutive 120-minute knockout ties.

Over the course of those matches, the defender was often at the centre of attention, either through rugby-tackling opponents, scoring own goals or confidently dispatching penalties.

It was a fitting way to end a long and decorated career.

Ignashevich made his international debut in 2002, quickly making a name for himself — as both a reliable defender and a capable goalscorer.

In June 2003, in a qualifying match for Euro 2004, the then-23-year-old scored twice to rescue a 2-2 draw for Russia against Switzerland.

His first was a towering header; his second one of the most emphatic penalties you’ll ever see.

Fifteen years later, that skill would not desert him.

Ahead of Russia’s meeting with Ireland three months after the Switzerland match, BBC journalist Dmitry Shishkin identified Ignashevich as one of four Russian players to watch out for.

Of Ignashevich, Shiskin wrote: “The 24-year-old centre-back from Lokomotiv Moscow promises to become the future pillar of the Russian team.

“He is the typical modern defender — he likes to take part in the attacks and quite often scores.”

Over the years he was less a meagre pillar, more a gigantic dome atop Saint Basil’s Cathedral.

And yet, despite Ignashevich’s wealth of experience, the long-time CSKA Moscow player managed to provide not one but two moments of high-profile slapstick at the 2018 World Cup.

Neither seemed like the work of one of the world’s most capped players. Both, however, provided a great deal of entertainment.

Since the 2018 World Cup witnessed the advent of VAR, few would have predicted it also being a tournament for mass rugby tackling in the penalty area.

With more cameras and more eyes on every incident, defenders would surely have a harder time getting away with fouls in front of their goal. Wouldn’t they?

They would, but that didn’t stop everyone from Tunisia to Panama from taking part in some wildly aggressive marking.

Hosts Russia were equally guilty, perhaps confident that the home atmosphere would spare them any severe punishment.

But while all teams in the competition began conceding penalties at an alarming rate, Russia’s defensive aggression — and the aggression of Ignashevich in particular — ended up costing the team without the intervention of the referee.

By the time of the host nation’s third group match against Uruguay, qualification was already assured. Had it not been, Ignashevich’s inexplicable takedown of Edinson Cavani might have undergone greater scrutiny.

The tackle, which makes less and less sense every time you see it, freed up space for Luis Suarez to score from a direct free kick.

Old habits die hard, and in the very next match Ignashevich repeated the trick — with equally catastrophic results.

This fresh rugby tackle almost gave Sergio Ramos a taste of his own medicine, but resulted in a comical own goal for the Russian defender.

In an alternate timeline, those two defensive blunders could have been the defining moments of Ignashevich’s tournament.

As it happened, an Artem Dzyuba penalty tied the Spain match, sending the two sides to a penalty shootout.

Having played the entire 120 minutes, Ignashevich stepped up to score his side’s second; Spain’s Koke missed the next one, and Russia — massive underdogs for the tie — eventually emerged victorious.

In the quarter-final against Croatia, Ignashevich again stepped up in the shootout.

With his final kick as a professional footballer, he smashed the ball with all the power of his 2003 spot-kick against Switzerland.

That 38-year-old body, being put through its 127th international match, might have forced Ignashevich into underhand defensive techniques over the course of the tournament, but the battle-hardened Russian sure maintained a hammer of a right foot.

The net rippled, with Croatia keeper Danijel Subašić nowhere near.

Croatia would eventually progress, but Russia left the tournament — their tournament — having gone further than anybody thought they could.

“I couldn’t imagine that I would finish my football career on such a high note,” Ignashevich wrote after announcing his retirement days later.