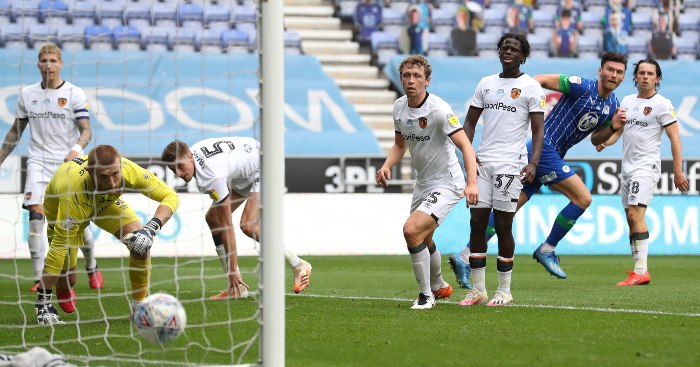 Wigan Athletic 8 (eight) Hull City 0. If you so much as glanced at your phone on Tuesday night, you were likely to have been greeted with that scoreline at some point.

In the battle of two Championship clubs in crisis, Wigan took a huge step towards avoiding relegation, despite a potential 12-point deduction looming over the club for their farcical administration. Hull, meanwhile, appear doomed for League One, having lost 14 of their 18 league games in 2020.

FWIW, we feel really sorry for Hull’s supporters amid the shitshow of the club’s ownership. Likewise, we can only admire Wigan’s resilience in their own difficult times. Anyway, enough of that sincerity, let’s take a closer look at this clusterfuck.

Cards on the table: your not-so-esteemed correspondent has a bit of a personal vendetta against Matthew Pennington, still haunted by memories of the centre-back falling over in the snow to concede a late winner against Sheffield Wednesday while on loan at Leeds United.

The sight of Pennington getting lost under the flight of Kieran Dowell’s cross to allow Kal Naismith the chance to head into an empty net is weirdly comforting but also incredibly sad.

In 64 Championship appearances over the last three seasons, he has been involved in eight clean sheets. Football can be brutal.

How do you go 26 first-half minutes without conceding yet still manage to ship seven goals before the break?

There are seven Hull defenders and the goalkeeper in the box when Kieffer Moore manages to squeeze a shot into the bottom corner.

Hull keeper George Long is already tearing strips off of those in front of him. It’s going to get a lot worse than this, mate.

There’s a lot to be said for the fun you can have as a football supporter when you’re team is so awful you have an excuse to leave your seat and go to the bar after half an hour, knowing you don’t even have to bother looking at a TV screen as the result has already been put to bed.

Unfortunately, given fans can’t attend games right now, we can only imagine just how harrowing this was to watch on TV for Hull fans.

Dowell’s touch and finish is tidy – the sort of thing good footballers can do – but again there are eight Hull outfield players in the picture when the attacking midfielder is given the time and space to tee himself up.

It’s getting ugly now. There’s a defender on the floor. The Hull players daren’t look at each other.

Eight minutes until half-time. Just see it out. They held firm for 26 minutes earlier, surely they can just get through this next eight minutes without conceding another?

Erm, OK, three minutes. That’s a start. It could’ve been worse, we suppose. Don’t look at Pennington. Just don’t. If you ever had to mark a lad from the year above in the playground, you’ll know how he feels.

If it’s any consolation, it took Brazil just 29 minutes to concede five against Germany at the 2014 World Cup. That doesn’t help? Look, we’re trying our best here.

When we clicked on one of the highlights videos on YouTube, we were given a warning: “This video may be inappropriate for some users.”

We’re starting to suspect it was a warning about the sheer tragedy of this goal. Brazil didn’t concede their sixth until the 69th minute.

Heading into the game, Wigan were the second-lowest goalscorers in the Championship. Their xG for the first half was 1.66. Their xG for the entire game was 1.79. They have now scored more goals than seventh-placed Millwall.

You could argue that this was a completely freak result. You could also argue that it’s a good advert for closing people down before they shoot.

Fucking hell, Kieran. There’s absolutely no need for that.