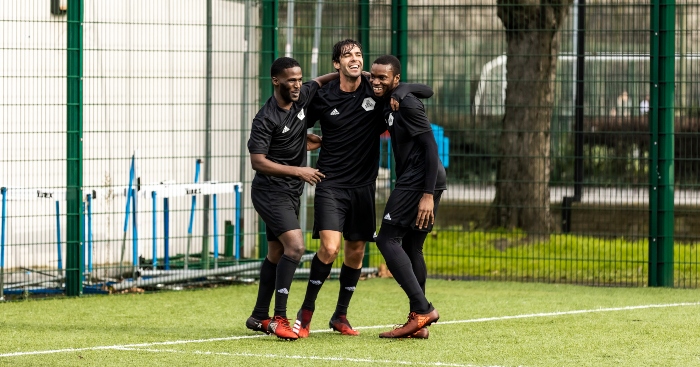 You probably hadn’t heard of Jamal Farid before this weekend, but he has now performed a footballing feat you could only ever dream of.

The Hackney Wick FC defender found himself in the surprising situation of facing off against a World Cup winner during a six-a-side game – not something that happens every week on the football pitches of east London.

When you’re a regular at non-league level, you need to be disciplined and sensible, never trying anything too ambitious. The rules don’t apply when Kaka is around, though.

Kaka, who retired three years ago but is still in great shape, took part in a match in Haggerston as part of adidas’ ‘Rent-a-Pred’ promotion, where teams who were a man short for a game were invited to add an elite player to their ranks.

The Brazilian, a member of his country’s 2002 World Cup-winning squad, scored a goal which you may have already seen on these pages.

However, more importantly (this is not up for debate, it’s unequivocally more important), he was nutmegged by Farid so comprehensively he could only smile.

There are only so many times you’ll get the chance to take on a world-beater, and at this point you need to make a calculation.

First off, you need to figure out if you’ll get a bollocking from your captain for going for a difficult play if it doesn’t come off – and, let’s be honest, most of the time it will not come off.

You can win a six-a-side game and the result will stay with you for a couple of days. Maybe a week at the most.

It’s enjoyable at the time, sure, but eventually another game will roll around and you’ll have to contend with a new set of pressures no different from the last lot.

This, though? This isn’t the sort of thing that will come around again, and you know that from the moment Kaka steps onto the pitch. If you’re not at the level where you’ll regularly line up against high-level opponents, you need to make your moment count.

If you see a superstar share the same patch of grass as you and don’t set out to embarrass him at any cost, you’re simply doing football wrong.