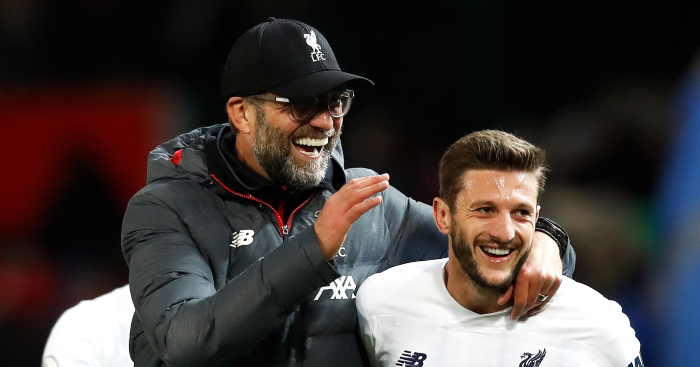 There was a moment midway through the second half at Old Trafford when Liverpool’s defence played yet another hopeful long ball up to one of their attackers.

It was a tactic they had deployed all afternoon, and one which routinely failed. Manchester United’s back three, protected by Scott McTominay and Fred in front of them and Aaron Wan-Bisakka and Ashley Young either side of them, asserted their physical dominance and forced Jurgen Klopp into a change of formation. On came Adam Lallana in place of Jordan Henderson to operate on the right-hand side of midfield.

When another lofted ball was floated towards the halfway line, this time it stuck. Lallana plucked the ball out of the air, juggled it and found a team-mate to continue Liverpool’s attack as they began to assert some dominance after a below-par opening hour.

It was a beautiful, albeit understated, piece of play. Like few players, Lallana embodies both the positives and negatives of being made of silk. After the visitors had chugged away like a pub rock band for most of the afternoon, a touch of subtlety was required to captivate their audience.

But if you searched Lallana’s name on Twitter at the time, hoping to see a replay of that moment, you’d have instead been greeted by general condemnation of Klopp’s decision to introduce the England international.

“Adam Lallana has been useless for three seasons now, what’s the point of subbing him on? Doesn’t do anything whatsoever,” tweeted @SamuelLFC.

“Klopp throwing in the towel, or Adam Lallana, as they sometimes call him,” quipped @vonstrenginho.

If Lallana does anything positive in this game I will guarantee my leg will grow back by next Friday.

It’s fair to say Lallana has endured a couple of frustrating seasons at Anfield. After establishing himself as one of Klopp’s favourites in the early stages of the German’s reign on Merseyside, recurring injury problems have seen the midfielder lose his rhythm while the Reds have bolstered their options in his position.

That Liverpool have improved so they no longer have to regularly rely on the 31-year-old does not make him a terrible footballer, however.

Klopp is clearly enamoured by Lallana, whose skill-set lends itself to a variety of different roles in the team: in a midfield trio, on the wing in a front three, anchoring the middle of the park or, as at Old Trafford, on the right-hand side of a 4-4-2.

Lallana’s equaliser, his first Premier League goal for over two years, could be seen as a reward for his persistence under Klopp and a timely flick of the Vs to any sneering onlookers when he was introduced in place of Henderson.

The meek, well-mannered boy from St Albans does not exactly have the appearance of Liverpool’s chief piss-boiler, but he may have carved out a niche for himself as he enters the latter years of his career.

He has always been a superb player off the ball, pressing and harrying defenders into nervous exhaustion. At Old Trafford he niggled and needled and made himself a nuisance coming up against the man who has made that his own forte at Manchester United, Ashley Young.

His previous Liverpool outing came in a 92nd-minute cameo against Leicester City, which he marked by picking a fight with as many Foxes defenders as possible in order to prevent a quick restart following James Milner’s late winner before relishing the chance to stoke tensions with Ayoze Perez in an act of Scrappy-Doo shithousery.

I’m just gunna keep referring it until everyone appreciates Lallana an how quick he’s in Perez’s face, Milner saying he didn’t see anything in his interview was funny as well
pic.twitter.com/X8zOzoLbVF

“In the changing rooms before games he is one of the loudest” Andy Robertson told Liverpool’s official website after the match.

“He could easily be quiet as he is on the bench and not playing. But the way he has conducted himself – and, to be fair, [along with] all of the lads who haven’t played as much as they would have wanted – Adam is a top, top professional and a top, top guy.

“When he came on I thought he was brilliant and I thought he changed the game. To get that goal, it will do a world of good for him and his confidence and I think we’ll see a lot more from him.”

Liverpool are going to have to get used to playing under the pressure of leading the Premier League if they are to go one better than last season and end that infamously long wait for a title.

Lallana may not be the player to get them over the line, but in the battle of them against the world, Liverpool are at least safe in the knowledge he’s ready to fight their corner.