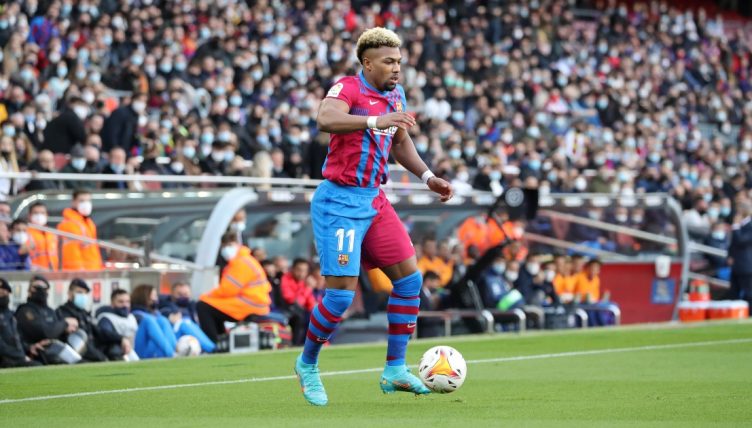 One piece of received wisdom commonly taught at the University of Life revolves around the idea that you should ‘never go back’ to something or someone – but it seems like Barcelona must have skipped that particular lecture.

Faced with the wreckage of years of financial largesse, which left Ronald Koeman flailing like a third-class passenger attempting to escape the Titanic, Barcelona appointed Xavi Hernandez as their manager.

It’d be easy to say this decision was taken years ahead of schedule, the immediate dose of nostalgia and good vibes that was necessary to resuscitate an ailing club.

And Xavi has reinforced this impression with some of his decisions, making 38-year-old Dani Alves his first signing and publically stating his aim to get Barca playing the ‘right way’ again.

Then there’s Adama Traore, re-signed from Wolves on an initial loan deal until the end of the season.

Traore played a walk-on role during Barca’s golden era, making a solitary league appearance during the 2013-14 campaign before leaving for England.

READ: Where are they now? Barcelona’s Xl from Adama Traore’s debut in 2013

But, having spent the intervening period sleeping in the gym and living off unseasoned chicken and broccoli, the 26-year-old returned to the Camp Nou determined to make up for all the lost time.

While Traore came through the ranks at La Masia, he hardly represents the idealistic version of Barcelona. With his barrelling runs, aggressive wing play and, statistically speaking, poor goal and assist output, Traore is not the second coming of Lionel Messi.

The beauty lies in the realisation that he doesn’t have to be. Traore has the potential to drag Barcelona into a new era, simply by being himself.

Xavi chose to unleash his new signing on the embodiment of grizzled pragmatism – Diego Simeone and Atletico Madrid – in a match Barcelona desperately needed to win to reignite their Champions League hopes.

His starting position on the wing was important. After all, Traore had turned down a move to Tottenham that would’ve awkwardly converted him into an auxiliary wing-back. This was an immediate demonstration of faith.

And, after being bundled to the floor within 60 seconds, Traore picked himself up and proceeded to tear Atleti a new one.

The La Liga champions were ill-equipped to deal with their opponent. Simeone’s side are fast losing their reputation as the masters of defence and eyed Traore with the frightened bemusement of a Texas farmer discovering a UFO in his back garden.

With the scores at 1-1, Traore burst down Atletico’s left-hand side before sending a pinpoint cross straight to the head of Gavi, who nodded past Jan Oblak.

It was his first assist of the entire 2021-22 season but you don’t subscribe to Traore for goal involvements. You expect vibes, carnival football and defenders soiling themselves while the forward charges towards them.

And he didn’t disappoint on his second Barca debut. Picking up the ball inside his own half, Traore took advantage of Koke and Yannick Carrasco’s hesitation to pirouette between both of them.

Rodrigo de Paul, short of shaking like a leaf, looked exactly like the first victim of a horror movie as Traore approached. A token effort was made to stop his opponent but De Paul was brushed aside by the baby-oiled assassin.

Faced with a backtracking defence, already realising the futility of stopping him in direct combat, Traore picked out Jordi Alba on the wing with an intelligent pass.

The move broke down shortly afterwards but, like a shot of adrenaline for Barcelona’s campaign, Traore’s dribble had already served its purpose.

Xavi was delighted with Traore’s performance, insisting his decision-making was spot on during the game.

“Adama is a very mature player,” said Xavi, whose side have now overtaken Atletico after their 4-2 victory and are up to fourth in the La Liga table.

“He knows when to face up, when to pass and he’s chosen his moments well today… He is a pure winger and he will help us.

“He is a great signing for the team. Adama makes the difference. He has power, strength, he dribbles at opponents and he’s solid in defence.”

There’s been a lot of talk of Barcelona reverting back to their Tiki-Taka glory days under Xavi, with some critics suggesting that the style that fuelled Barca’s greatest successes has become outdated in the modern game.

But, with Traore in place and capable of destroying the league champions, Barcelona may have found the man to drag them into a new era. And he couldn’t be further from Tiki-Taka if he was the son of Tony Pulis.

If Traore turns out to be a success at Barcelona, it’ll be on his own terms and playing to his own strengths.

Perhaps there’s merit in the idea of going back after all.