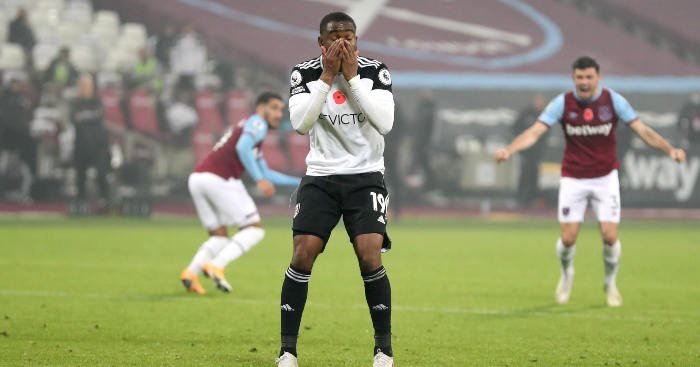 Ever since his penalty was stopped by Lukasz Fabianski on Saturday night, criticisms of Ademola Lookman have been widespread and relentless, but things aren’t that simple.

Focusing on the results-based business of the game is a simplistic approach from which you will know nothing. We should be focusing on the guts it took in the first place.

Instead of relitigating the kick based on its outcome, we need instead to go back a few seconds.

The confidence with which Lookman grabs the ball to begin with is the sign of a man who plays with absolutely no fear.

Not only is he putting himself forward for the most intense pressure a player can face in a league game, but he’s doing so in the knowledge that Aleksandar Mitrovic is standing there, looking at him, determining what will happen if he fails.

To then do this with the shot is akin to showing up in Pamplona for the running of the bulls wearing nothing more than a red scarf. Are you tempting fate? Sure, but the one time you get it right is worth it for the 99 occasions when it all goes horribly wrong.

There are people who will insist football is a team sport, but even the best teams need individual magic.

The mentality which convinces Lookman to take a Panenka penalty in the eighth minute of stoppage time is the same mentality which has taken him to the Premier League to begin with after playing park football at an age when many of his peers were several years into academy life.

You can’t just look at the miss in isolation, or even at the kick in isolation: you need to recognise it’s part and parcel of a footballing mindset that doesn’t contain the same notions of failure as everyone else.

This is the approach which will help Lookman make a real difference at the right end of the pitch, and to discourage the imagination of the Panenka is to discourage efforts to beat three men in one move or attempt an eye of the needle pass where it looks as though you have no options available to you.

In attempting the penalty, Lookman is remaining true to what has taken him this far. Simply scoring isn’t enough when we look at things in the longer term: it’s about the metagame of leaving opponents so terrified of being embarrassed – of being made to look small in comparison – that they live with a constant nagging distraction whenever he has them in his sights.

He has tried this before on international duty with different results. You’re not angry with him for trying it – you’re angry that he missed.

It has worked for Lookman in the past…pic.twitter.com/G6yUzJhaMi

Only the true greats look at moments like this and go for the option which, while not necessarily the most likely to send the ball into the net, are the most likely to leave opponents and opposition fans frothing at the perceived disrespect.

Antonin Panenka himself, of course, but also Sergio Ramos on multiple occasions and Zinedine Zidane in a World Cup final.

These are men who have looked at the norms and at notions of respect for the opposition before determining: ‘I don’t care how this makes you feel, it looks f**king sick.’

It’s like a cricketer hitting a six with a reverse-sweep, or a snooker player winning a frame playing with their weaker hand: if you get it right then there’s no way back for your opponent, and that’s enough motivation alone to give it a go.

Reflecting on the game on Saturday night, Lookman insisted: “I will not let one failure hold me back.”

We can’t wait for him to get an opportunity to redeem himself, step up to the spot, and chip the ball into the back of the net.

13 of the best and worst Panenkas ever: Zidane, Pirlo, Lookman, Ramos….

Can you name every player to appear for Fulham in their 09-10 UEL run?