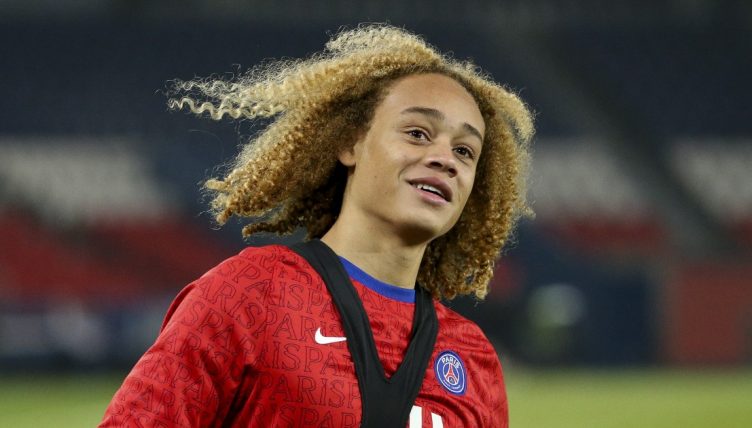 In November 2012, Barcelona manager Pep Guardiola famously fielded a full XI of La Masia academy graduates that cruised to a 4-0 victory over Levante.

It was the first time in the club’s history that they’d played a full team full of homegrown talent, but it wasn’t out of the ordinary for that era.

Some talented players have broken through and followed in their footsteps, but none have quite reached the heights of those that came before.

Like Manchester United’s Class of 92, it’s becoming clearer with hindsight that such a generation of players emerging at the same time was a miracle. A freak occurrence, unlikely to be replicated anywhere again for decades and certainly not at the same club once again.

Still, at the time it didn’t stop a clamour to see who would be the next big thing out of Catalunya. Amateur scouts and bloggers earmarked dozens of youngsters for future success, but one name stood out above all others as the anointed one: Xavi Simons.

The son of former Eredivisie striker Regillio Simons, born in Amsterdam and named after Xavi Hernandez, the story was almost uncanny. As if he’d been created in a lab to become the perfect fit for Barcelona. Just like Messi, he was clearly a special talent before he even hit his teenage years.

While there was always a buzz about Messi within football circles – just listen to how any of his old youth coaches describe him – the Argentinian was able to come of age and develop his skills away from the limelight, when YouTube remained in its infancy and social media was little more than MSN Messenger and MySpace.

Back then, the closest thing to a young footballer ‘building their brand’ was Jordan Henderson and Andy Carroll on Bebo. Who knew they’d prove to be such luminaries?

Jordan Henderson and Andy Carroll will be happy Bebo is on the way back… Time to update those profiles lads. #Bebo pic.twitter.com/LTH9Ou4Qo3

Come Simons’ adolescence, the world was a different place. The obsession with what’s next out of La Masia saw his every move in the youth ranks clipped, compiled and shared online.

He was just 11 years old when Catalan sports daily El Mundo Deportivo published a profile, and by the time he was 14 he’d amassed a million followers on Instagram. Soon enough he was represented by infamous superagent Mino Raiola.

The world of football is cut-throat at the best of times. There are serious and uncomfortable questions to be asked about how such pressure impacts teenagers’ mental health and how the industry treats those that don’t make it.

All of that can only be amplified for an individual that was a social media superstar before he kicked a ball at a senior level. It’s difficult not to feel uneasy about how Simons’ journey has played out in the public eye.

After all, the last player to make a name for themselves at such a young age was Freddy Adu, who never got close to the heights that it was supposedly preordained he ought to have reached.

READ: The 10 stages of Freddy Adu’s career: From wonderkid to wanderer

Nevertheless, the young midfielder seems to have developed at a steady pace since signing his first professional contract – at PSG, rather than his boyhood club – in the summer of 2019.

Simons made a handful of appearances in the UEFA Youth League within a few months of his arrival in Paris, and a few weeks prior to his 18th birthday, Mauricio Pochettino handed him his debut with a 12-minute cameo in a 1-0 Coupe de France victory over Caen.

Five minutes of Ligue 1 football have followed, but he’s had to be patient for his place in the fringes of the first team.

“He will not be Iniesta or Xavi, but he has quality and imbalance to be able to develop a career in the first division,” Pochettino said, following his debut, keen not to burden the kid with the impossible to emulate. “He is still very young, but he has very good potential.”

While his life and public profile have been anything but ordinary, Simons’ gradual integration towards first-team football has been sensible, patient and no different to that of any other academy player thought to be good enough for the step up.

Barcelona’s Pedri is the same age and made over 50 appearances last term before playing almost every minute for Spain at Euro 2020. Iniesta didn’t make his international debut until he was 22. The lesson is this: when they’re ready, they’re ready.

For Simons, that time might well be now – after what’s felt a long time coming.

With PSG’s assortment of stars given an extended break after the Copa America and Euro 2020, pre-season has given the 18-year-old a platform to show Pochettino what he can offer.

The Netherlands international has scored two from two in pre-season friendlies ahead of the 2021-22 campaign. He notched in a 4-0 victory over Le Mans before demonstrating his flair with a flicked-on pass, playing a one-two before timing his run and confidently slotting home in a 2-2 draw with FC Chambly Oise.

Reports suggest it’s a matter of time until he extends his current deal. There’s evidently confidence and belief in his ability in the French capital.

Given the quality and depth in the Parisiens’ squad, it’s unlikely that Simons will play a pivotal role next season. His frame is still boyish, with further physical growth looking necessary ahead of the next step.

But for all the surrounding circus, headlines and hashtags, he looks to be on the right path. The 2021-22 campaign may not be his breakout year, but it will be an important one – expect more than a couple of brief cameos, at the very least.

People have been saying “watch this space” about Xavi Simons for almost half his life. That’s still the case for now, but – finally – it won’t be for much longer.