After becoming a meme, Pique found redemption screaming into a camera 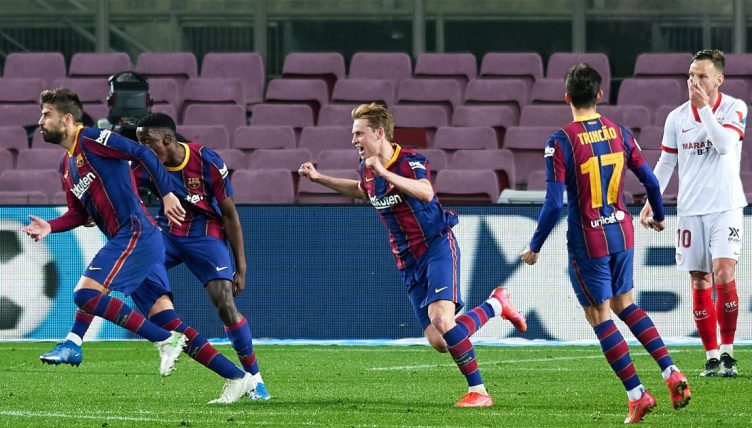 Gerard Pique is a Barcelona icon, but time stands still for no man.

Two short weeks ago, Pique became the subject of a series of internet memes following his attempt at stopping the rampaging Kylian Mbappe by grabbing desperately at his shirt.

It was an irresistible visual metaphor of both Barcelona’s decline and the passage of time catching up with Pique. Against PSG that night, Barcelona exhibited the slowest defence seen on camera since Lionel Hutz and their status as an elite European club seemed ludicrous.

It also played into the narrative that, while he may be one of the most decorated players of all-time, Pique has long since passed his best.

In all honesty, this may be true. While any perceived decline has been exacerbated by the chaos at Barcelona, there is no denying that Pique is not the same player of his mid-2010s peak.

But against Sevilla last night, the centre-back provided a reminder that class remains permanent.

Ronald Koeman’s team faced a mountain to climb in the second-leg of their Copa del Rey semi-final. With the competition providing the club’s only realistic chance of silverware, Barca entered the game 2-0 down.

The team have been accused of lacking application and verve during a traumatic season. None of that applied during a see-saw encounter in what’s fast becoming Europe’s best domestic cup competition.

Like an ageing rock band reuniting for one final show, Barca produced their most committed and entertaining performance in years to take the tie to their opponents.

Ousmane Dembele opened the scoring after 12 minutes and the game quickly developed into a ‘next goal wins’ encounter – concrete evidence that the Camp Nou is not that far removed from your school playground.

After Marc-Andre ter Stegen saved a Lucas Ocampos penalty, the stage was set for Pique to achieve some solace after his Champions League chastening.

After sending on all his available forwards, like a 12-year-old playing FIFA, Koeman sent Pique up front to scavenge a goal. Barcelona applied some belated pressure and won a 93rd-minute corner.

Lionel Messi’s cross was deflected and only half-cleared by Sevilla defender Diego Carlos. As the ball fell, the maligned Antoine Griezmann turned, set himself and curled an inviting cross into a packed six-yard box.

It would insult the intelligence to describe what happened next when the pictures can describe a thousand words.

There are a few things worth adding, though. Firstly, Pique’s delirious celebration was akin to a karaoke version of Diego Maradona’s scream at USA ’94, minus the ephedrine.

Secondly, while Barcelona won the tie in extra-time to progress to their ninth Copa del Rey final in 12 years, the club remains in turmoil. With no realistic chance of Champions League progression, a dissatisfied Messi and an ex-president in prison, their decline has been startling.

But football remains about moments like Pique’s equaliser. For a beleaguered club and castigated player, last night was all about finding a sliver of redemption during a difficult year.

You suspect that Pique will cherish the night he rolled back the years to save his boyhood club from footballing oblivion.

Those career obituaries may have been slightly premature.