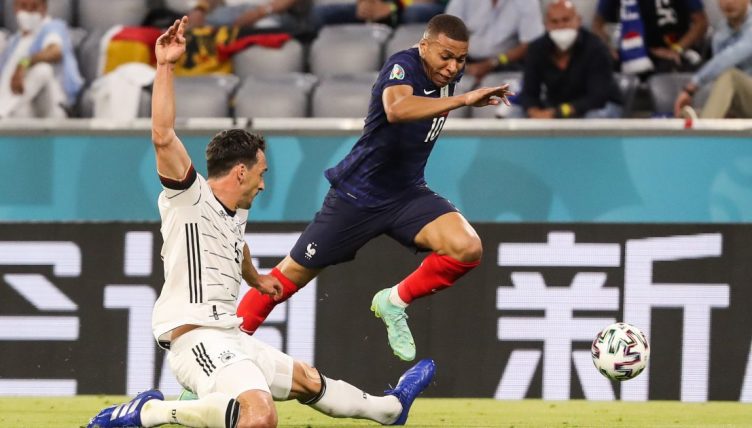 There is a famous scene in Terminator 2: Judgement Day in which T-1000, a superhuman cyborg, chases down a battered old police car on foot as he continues his torment of the fleeing passengers. Anyway, who else watched France vs Germany on Tuesday night?

It was the most anticipated match from the first round of group-stage fixtures at Euro 2020. The last two World Cup winners clashed at the Allianz Arena in the group of death. It ended in an underwhelming 1-0 win for Didier Deschamps’ men.

France were the favourites ahead of kick-off. Flexing talents such as Kylian Mbappe, Paul Pogba, Ngolo Kante, Antoine Griezmann and even an in-from-the-cold Karim Benzema, Les Bleus had somehow only improved since lifting the biggest prize in football three years earlier.

The three German centre-backs will have been all too aware of what a tough night they were in for. None more so than 32-year-old Mats Hummels. Playing in the middle of the three, the oldest outfield player on the pitch was tasked with stopping Mbappe, a man whose speed and acceleration should be used to prepare astronauts for a rocket launch.

When France took the lead in the 20th minute, Hummels showed a sign of weakness that you just can’t around the 22-year-old. A wonderful Pogba pass found Lucas Hernandez, rushing in from out of shot, who played the ball across the six-yard box.

Mbappe was waiting to tap into the empty net, but Hummels beat him to it, spooning the ball into the top corner of his own goal as he struggled to get his feet sorted.

As the game wore on, Germany pushed on looking for an equaliser, granting the striker more and more space to play with. He was cruelly denied an excellent goal in the 66th minute by the raising of the linesman’s flag as his curled effort cannoned in off the post. But there is no doubt Mbappe smelled blood amongst this tiring German defence, fear oozing from their very core whenever he faced them one-on-one.

The moment that will send shivers down Hummels’ spine came 11 minutes later. Simply surmised, Mbappe is famous for his speed and the German is not. But still, there was something super-human, almost robotic and emotionless, about this act.

Just as Sarah Connor thought she was safe from T-1000 once tucked inside the police car with the Terminator, Hummels likely thought the near 10-yard head start he had on Mbappe offered him some security as a heavy through ball was launched beyond the German backline.

A blink of the eye later, however, and the Frenchman had sunk his metal, blade-like arms into Hummels’ bodywork and clawed his way in front. He looked destined to carry out the kill.

And just as Arnold Schwarzenegger was able to reach for the shotgun in time to blast the shape-shifting cyborg from the back of his hijacked police car, Hummels was able to stretch a telescopic leg in front to hook the ball away from Mbappe.

But, to completely misuse another Terminator quote, Mbappe would be back. Cyborgs, after all, do not feel despondent. Nor do they pity their opponents.

In the 85th minute, he was once again released beyond the German backline before squaring the ball to Benzema to tap in what looked like the clincher. Once again, Low’s side was saved by an offside, with the striker’s knee adjudged to have been in an illegal position in the build-up.

Ultimately, Mbappe failed in his mission, even if France did come away with a big three points. But Hummels will likely now go to bed each night and, in the surrounding silence, hear the rapid whir of footsteps on grass as Mbappe closes in on him again. And again. And again.