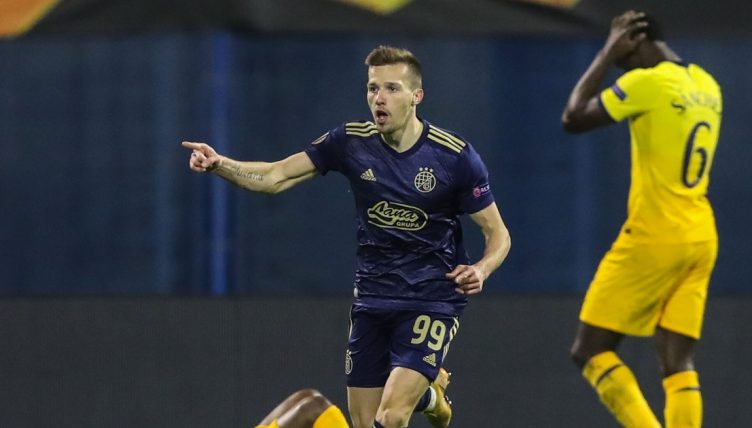 Look away, Andrea Agnelli. Dinamo Zagreb’s Mislav Orsic served us all a reminder that European football is about sporting competition, not cold heartless business.

It was inevitable, and understandable, that much of the focus in the English media would be on Tottenham‘s shock capitulation as they squandered a 2-0 first-leg lead, exiting the Europa League after a 3-0 defeat away to the Croatian champions.

But the Jose Mourinho soap opera shouldn’t distract you from what was a stunning performance from Dinamo Zagreb and in particular their left-sided forward Orsic – who scored all three goals.

It’s probably the first time that you’ve ever heard of the 28-year-old, who only has a handful of senior caps for  Croatia, but what a way to grab your attention.

His first, a beautiful right-footed curler, left Hugo Lloris scrambling desperately to claw the ball out of the top corner, but that is where it was always destined to end up.

A beautiful strike from Mislav Oršić! You don't stop those! 🚀#UEL pic.twitter.com/agmKqjjpPw

Arguably, it was the most important strike of the night. The difference between being two goals down and one goal down is huge, even if the maths does not really add up.

Suddenly, the underdogs’ glimmer of hope turned into a gleaming light.

After another 20 minutes of pressure, during which Spurs started to look more and more startled by the confidence of their opponents, the tie was level.

If his first were a perfect example of how individual brilliance can change a game, his second was the result of a team refusing to bow to pressure.

We are all square in Croatia! 😳

Despite time running out, Zagreb were not about to start hoofing the ball into the box. Cool heads prevailed as a slick move from back-to-front seemed to completely bewilder Mourinho’s men, with Orsic arriving to finish off the move.

Into extra time we went, with every viewer other than Spurs fans and Agnelli having a brilliant time.

After a cagey 15 minutes, Orsic once again took centre stage with the best goal of the night.

Cutting in from the left, he breezed past Serge Aurier, Moussa Sissoko and Tanguy Ndombele, before lashing a lethal strike into the net, beating Lloris at his near post.

That is a STUNNING hat-trick with Spurs now on the brink in extra-time!!!! pic.twitter.com/LHFeGXX57K

Cue jubilant scenes. A mountain of Zagreb players appeared on the pitch as players, substitutes and staff members piled on top of the hat-trick hero. Heads were in hands from both teams in sheer disbelief at what had just unfolded.

Spurs pushed hard for an equaliser that would have seen them through on away goals, but it was never going to come. A Zagreb body was always in the right place at the right time to ensure the world witnessed a massive upset on the European stage.

It is remarkable and utterly maddening that the likes of Juventus chairman Agnelli – one of the most vocal proponents of doing away with the vulgar minnows and forming a ‘European Super League’ – cannot see how good results like this are for the game of football.

Why would anyone want to live in a world where the likes of Zagreb cannot come back from 3-0 down to beat a team like Spurs?

Sadly, Agnelli is not alone. Hopefully, a result like this can help persuade those currently on the fence just how bad an idea a European Super League really is.

Everything you need to know about the proposed ‘European Premier League’