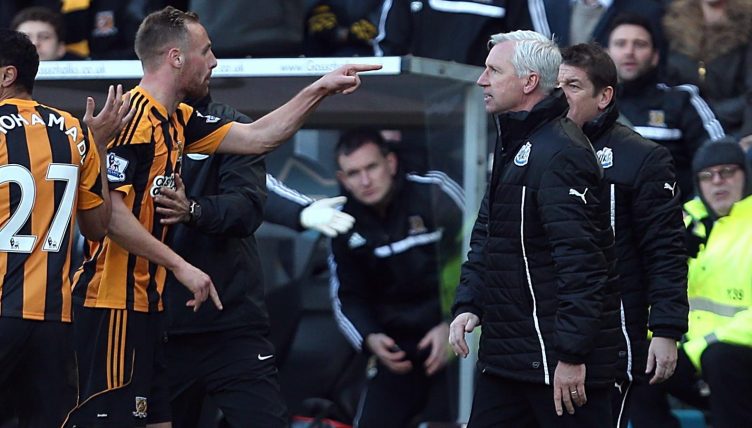 “Oh my word, Alan Pardew! The book is about to be throooooown at you!”

Those were the words of beloved Soccer Saturday host Jeff Stelling, delivered in his finest WWE commentator’s voice, as the then-Newcastle United manager made one of the most expensive head movements in sporting history.

With the Magpies already leading 3-1 against Hull City in March 2014, there was no need for it. Well, realistically, there is never any real need to headbutt someone on a football pitch, but it is perhaps more excusable when it comes as a result of frustration.

As the ball ran off the pitch and into the Newcastle dugout with 20 minutes of the match remaining, Hull midfielder David Meyler chased after it, eager to resume the game as quickly as possible.

But an ill-judged shove on Pardew from the Irishman lit a fuse in the manager’s head. That was it; someone had besmirched his honour, and now they were going to pay.

One of the craziest red cards we'll ever see in the Premier League! 🤯

Was the referee right to send off Alan Pardew and book David Meyler here? 💥#RefWatchRewind

Pardew needed no invitation. The blur of white hair was caught perfectly by a pitchside cameraman, who hopefully received a healthy bonus at full-time, as Pardew pounced, leaning in with all the intent in the world. A baffled Ahmed Elmohamady watched on.

The contact may have been underwhelming, but the message had been sent. As forehead met nose, Meyler had two options: hit the deck, or put on the finest display of finger-pointing since Kitchener in World War One.

He chose the latter. Yoan Gouffran (remember him?) rushed in to defend his manager, and then everyone got involved. Mapou Yanga Mbiwa (and him?), tried to play peacemaker, while Luuk De Jong (oh, and him?) couldn’t help but wonder over for a closer look.

Following the full-time whistle, the logical conclusion to draw from the game was that Pardew, rather than a football manager, was in-fact an alter-ego snatched from the WWE universe – we should have known as soon as Stelling delivered his killer line.

Just as wrestlers live for the thrill and artistry of man-on-man combat, Pardew lives to defend his technical area like he is walking out at Wrestlemania every Saturday; be it against player, manager or official.

In 2006, he was drawn into his first shoving match, feeling the rough end of Arsene Wenger’s bad mood, during a clash between Arsenal and West Ham; the classic clash between loveable good guy and the slick villain. Although this time Pardew was cleared of any wrongdoing.

Eight months later he was back in the headlines, this time feeling the need to enter the field and intervene in a scuffle between Charlton’s Lloyd Sam and Hull’s Ian Ashbee – why always Hull, Alan?

Another shove came in 2012, this time on an official, as Pardew vehemently claimed that a ball had gone out of play via a touch from a Tottenham player. But there was to be no unconscious referee to miss Pardew pinning Andre Villas-Boas for three, as Newcastle took home the points.

Pardew’s status of prime-time trash-talker was confirmed in 2014. After a continuous war of words between the pair, Pardew delivered a line so witty, so sharp, that it will doubtless be printed on t-shirts for decades to come. With an iconic finger wag towards Manchester City boss Manuel Pellegrini, out came: “Shut your noise, you fucking old c*nt.”

Two months later, he headbutted Meyler. What. A. Showman.

Following the headbutt, Pardew was fined £100,000 by his own club who, at this point, may have been starting to wonder whether that eight-year deal was actually a good idea.

Even his post-match reasoning – that he was “pushing Meyler away with his head” – sounded like it should have been followed by “… but this Friday night [grabbing the microphone], little Dave is going to know what it feels like, when Hardman Pard, really delivers the SMACKDOWN!”

It is somewhat fitting that just days after The Undertaker retired from professional wrestling, football’s own dugout heavyweight took a step away from his personal squared-circle.

Sadly, we shall no longer see The Rock-esque trash talk – who I am sure called Ric Flair a “fucking old c*nt” at some point. Nor shall we see his devastating finishing move. Like the Tombstone or the Last Ride, it has been put on the shelf.

Pardew now ventures into the Bulgarian boardroom, where he will take on the role of Technical Director for CSKA Sofia.

But could this only be the next chapter for Hardman Pard? After all, hasn’t he always had a hint of the Vince McMahons about him?

The swagger, the charismatic smirk, the tendency to bust out some premature dance moves. Sure, the gravelly growl with which Pardew fires his players will need to be worked on, but there is certainly something there.

For now, though, we can bask in the wonderful memories that Pardew has left in the dugout. The physical battles, the trash-talking, and that headbutt.

TRY A QUIZ: Can you name every Newcastle United manager in the Premier League era?