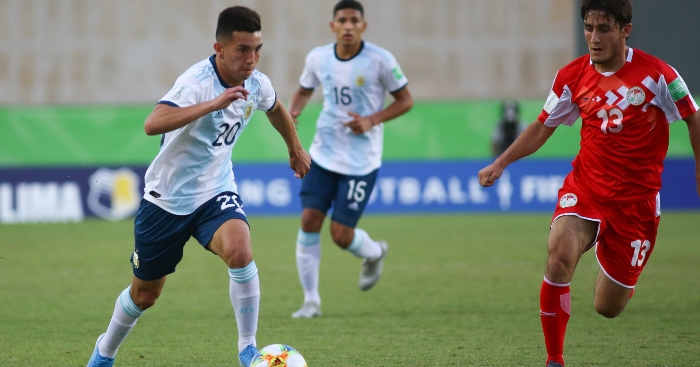 On Saturday night in Buenos Aires, Independiente faced River Plate looking to break an unwanted record. The Rojo hadn’t beaten River away from home in 11 years.

River, of course, are a powerhouse of Argentinian football, but for Independiente, considered one of the other five ‘grandes’ of the nation’s favourite sport, it was far too long to have gone without a single victory.

This time, though, there was an opportunity for Independiente. River had been beaten 3-0 by a Luiz Adriano-inspired Palmeiras in the Copa Libertadores mid-week, so would be smarting.

Perhaps most importantly, though, Independiente had a card up their sleeve, a player who was just seven the last time Independiente had beaten River away but who has already been earmarked as one to watch for some time: Alan Velasco.

Eighteen-year-old Velasco came through the Independiente youth ranks, captaining each of the age groups and building a reputation as the club’s next great hope.

In 2019, he made the breakthrough, appearing for the senior side for the first time and starring for Argentina at the Under-17 South American championships, which they won, and the Under-17 World Cup in Brazil.

Yet it is in the last few months that he has really begun to demonstrate his full potential. In November, he bagged his first senior goal to help Independiente through to the quarter-finals of the Copa Sudamericana.

And since Christmas, he has flown, scoring against Argentinos Juniors and Arsenal de Sarandi in consecutive games leading up to the tie with River.

Immediately, his confidence showed. Within minutes of kick-off he nipped past two defenders and into the penalty area, forcing a fingertip save from Argentina goalkeeper Franco Armani.

And then came the moment to announce himself to the world.

Nominally, Velasco was playing on the left, but he is prone to drift and found himself between the River lines in the centre of the pitch.

What a goal by Alan Velasco! 😍 pic.twitter.com/Te70nVb0RS

He received the ball from Alan Sonora on the half-turn, twisted one way and the other, leaving Leonardo Ponzio on his backside, and unleashed a piledriver into the top corner of Armani’s net. One-nil.

Fifteen minutes later, he was at it again. Another pocket of space was found, and another rocket launched. This time it was not as well-placed, but Armani’s exceptionally inelegant attempt at a save saw it bounce over his body and into the net.

River dominated the game from then on, but through a combination of fine goalkeeping, last-ditch defending and good fortune, Independiente held on for the result, ending River’s chances of progressing to the final of the Copa Diego Maradona and sending Boca through in their place.

After the game, Velasco was asked about his golazo and replied with the nonchalance of someone to whom such brilliance comes naturally. “Sonora got the ball, got his head up in the middle, I managed to turn and waited for Ponzio to follow me out so I could knock to the side and hit it.”

Velasco’s small stature – he’s just 5’6” – and the club he plays for have inevitably led to him being dubbed the ‘next Sergio Aguero’, but that comparison does not tell the true story.

He is, according to his youth coaches, most comfortable playing in behind a central striker and is as much a creator as a goalscorer.

In a Copa Sudamericana game against Uruguay’s Fenix last November, he perfectly demonstrated his inventiveness and skill, dribbling out of a tight situation to lay on a goal for Silvio Romero.

🇦🇷⚽🌟Classy 18 year old Alan Velasco was a wonderful bit of skill to set up Silvio Romero to fire the @Independiente third! #Sudamericana pic.twitter.com/n4eZbwbK4n

As Velasco told Argentinian sports daily Ole: “The dribble is an innate ability [of mine] and recently I’ve been learning how to pass better.”

Ex-Real Madrid manager Santiago Solari has reportedly urged his current employer, Mexico’s Club America, to splash out the US$23.5million that would be required to trigger Velasco’s release clause. In Europe, Monaco, Lyon and Parma are all mooted as suitors.

Given the new, post-Brexit visa rules implemented by the FA, which make signing South Americans a far less complicated task, the Premier League may also be a realistic destination for Velasco now.

Newcastle are reportedly interested, though with Mike Ashley still at the helm, their fans will be forgiven for treating what would be an exciting bit of news with a fair degree of scepticism.

Whatever the destination, it will surely not be long before Velasco is off.

As is so often the case – and is so unfortunate for South American football fans – Independiente’s finances are a mess, so they are desperate to sell and may be willing to accept a lower fee.

For Independiente fans, then, Velasco’s goals against River may be the last they see of him. If so, at least he managed to get them that long-awaited away win.