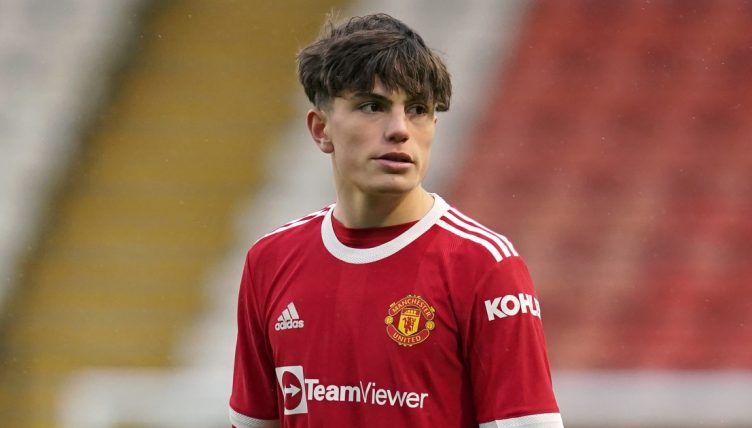 Despite being 17 years old and never having played first-team football, Manchester United prospect Alejandro Garnacho has already been called up to the Argentina senior squad for their March World Cup qualifiers against Venezuela and Ecuador.

But when you look at what he’s done for the United youth teams, it’s little wonder Argentina boss Lionel Scaloni wants to fast track him. Garnacho already has a back catalogue of goals that most players can only dream of.

Garnacho was born in Spain to an Argentinian mother and Spanish father and initially came through the academy at Spanish side Atletico Madrid, who are renowned for producing and developing world-class forwards.

While playing for Atletico’s Infantil B, he displayed his natural goalscoring instincts and became Spain’s top scorer at that level in 2016.

The winger, who wears the No.7 and grew up idolizing Cristiano Ronaldo, continued to take the youth league by storm and made his Under-19 debut at the age of 15 during the 2019-20 season.

According to Spanish outlet Marca, he was regarded as the jewel of their academy and Atleti were said to have done everything within their power to persuade him to stay at the club.

But his impressive performances at the youth level unsurprisingly caught the attention of Europe’s biggest clubs. United fended off interest from Real Madrid and Borussia Dortmund as the lure of treading the same path as Ronaldo seemingly made the difference for Garnacho.

United paid a £419,000 compensation fee to secure his signature in 2020, and he was the third La Liga starlet to join the club that summer after Marc Jurado and Alvaro Fernandez.

Garnacho enjoyed a promising debut season with United’s Under-18s, registering seven goals and a further four assists in 18 appearances, including a hat-trick against Stoke City.

But he needed time to adapt to English football and was often overshadowed by fellow forwards Charlie McNeill and Joe Hugill, who arrived from Manchester City and Sunderland respectively.

Yet Garnacho still did enough to impress the academy coaches at United, and was rewarded with his first professional contract in July 2021.

“It’s a dream come true to sign my first professional contract with Manchester United,” Garnacho said on Instagram. “Proud day for me and my family, thanks to everyone who has helped me get to this moment.”

Garnacho worked hard in the summer and has taken his game up another level this season, moving above some of his team-mates in the pecking order.

He’s impressed fans with his incredible technique, pace and dribbling ability, making him a joy to watch when he’s running at opposition backlines.

The winger has also registered 17 direct goal contributions in his last 21 appearances for the Under-18s, including two goals and an assist in the prestigious UEFA Youth League. He’s started to make the step up to Under-23s football, scoring two goals in seven Premier League 2 appearances.

Overall, he is United’s top scorer at academy level this season and, while his stats are brilliant, it’s the nature of his goals that is most impressive.

Garnacho netted a stunning hat-trick in United’s 8-2 win over Birmingham City’s Under-18s in Premier League Cup in September 2021 and all three goals are worth watching on repeat. But his first goal was definitely the pick of the bunch.

He won a free-kick on the edge of the box and then dusted himself down before unleashing an unstoppable strike into the top corner.

Since joining United, Garnacho has mainly played on the Carrington training pitches but he made his first appearance at Old Trafford during the FA Youth Cup third-round clash against Scunthorpe in December 2021.

With United leading 1-0 in the 24th minute, Garnacho – who has represented Spain at youth international level – showed what he’s capable of by controlling McNeill’s pass before acrobatically finishing into the roof of the net.

The goal lit up a sparsely populated Old Trafford. A strike of that quality wouldn’t have looked out of place on a Wayne Rooney highlight reel.

WHAT A GOAL!! Garnacho, take a bow fella! Aaroen, lovely ball in to McNeill, he flicks it on first time and Garnacho with an outrageous overhead kick #MUFC #FAYouthCup pic.twitter.com/mDZfUmrakI

After helping United to a 3-1 win away at Reading, the winger returned to Old Trafford to face Everton in the fifth round of the competition.

McNeill, Kobbie Mainoo, and Sam Mather gave United a 3-1 lead against the Toffees before Garnacho managed to steal the spotlight in the closing stages.

Despite starting the game, he was still full of energy in the 89th minute and showcased his blistering pace to lead a one-man counter-attack.

The 17-year-old left Everton defender Mathew Mallon eating his dust before keeping his cool in the penalty area to finish calmly into the bottom corner.

“That’s ridiculous play from him. It looks like the first minute of a game, showing no tiredness, and composure when he gets in the box,” Febian Brandy told MUTV. “I’m happy for him. He was man of the match, him or Mainoo.”

The goal was also reminiscent of Gareth Bale’s famous El Clasico strike in the Copa del Rey, where he turned on the afterburners and humiliated Barcelona’s Marc Bartra.

But Garnacho channelled his inner Ronaldo after finding the back of the net, ripping off his shirt before doing the iconic ‘SIUUU’ celebration.

Garnacho has certainly made a great first impression on the fans inside Old Trafford, scoring two wonder goals in his first two appearances at the stadium.

While he may not be able to maintain that incredible standard, we certainly doubt it’ll be the last time that he’s celebrating at the Theatre of Dreams.