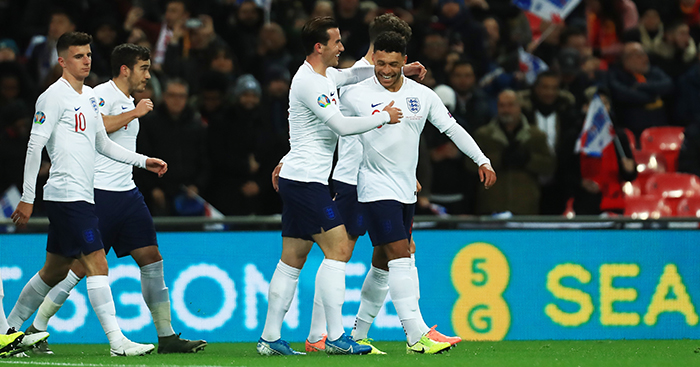 Alex Oxlade-Chamberlain wasn’t MOTM against Montenegro, but his renaissance for Liverpool and England is great news for everyone. Long may he keep on shooting.

Unless you’ve been avoiding football media the last week or so — and given that it’s international break, we wouldn’t blame you — you will have heard talk of an England ‘All-Time XI’.

The reason? England’s Thursday night game against Montenegro was the men’s team’s 1,000th fixture, giving everyone the perfect excuse to look back on the nation’s best ever players.

The BBC Sport website even invited visitors to submit their own All-Time XI, later compiling the results into an aggregated, fully democratic All-Time XI.

And yes, Gary Neville was in it.

Now an All-Time XI is all well and good. But there are, as commentators like Huw Davies have pointed out, a few problems with the conceit.

It’s odd how ‘best’ XIs are uniformly separated into positions yet have zero interest in making the team workable. Picking a 4-3-3 with three attacking midfielders makes about as much sense as picking a 2-0-8, so just name your 10 favourite outfield players and have done with it. https://t.co/G70PvzY8CO

Namely: how the flying fuck would a team like the above work? Even if we grant the magical squad a non-linear version of time in which Bobby Moore can partner Rio in defence, how could we let them play without a single defensive-minded player in midfield?

Davies makes a very good point: if we insist, for the sake of realism, on using a realistic formation for the All-Time XI — a rule that lets players like Neville sneak in ahead of Wayne Rooney — why are we so unrealistic about how the players would actually play together?

Where, in other words, is Scott Parker?

At least, that’s what a lot of people might have been thinking on Wednesday.

But that was before Gareth Southgate saw all those All-Time XIs and thought, “Actually yeah, that might work.”

Because England’s actual XI for its 1,000th match was as fantastical as any of the 126,000 XIs submitted to the BBC by procrastinating laypeople.

The ‘rock’ in central midfield was elegant playmaker Harry Winks, a man who makes fewer tackles for Tottenham than a player who only plays the game to do nutmegs.

Turns out, to everyone’s surprise, you can just whack half a dozen attacking players on the pitch without consequence.

England cruised to a 7-0 win, as both Jordan Henderson and Declan Rice sat comfortably on the bench for 90 entertaining minutes.

A month ago, that solid defensive duo presided over Engand’s first qualifying defeat in a decade, but the squad’s more conservative players were not missed here.

But perhaps none benefitted more than Oxlade-Chamberlain, a player whose exact role for club and country has often been hard to identify. A lovely player to watch, just where best does he fit in?

Well, in this most buccaneering of teams, he looked completely at ease, and his goal in the 11th minute was another beauty.

Given license to get forward — as was everyone, to be fair — ‘the Ox’ thumped home his first England goal in two years thanks to Ben Chilwell’s first assist of three.

And though Oxlade-Chamberlain played little over half the match, his immediate success within England’s Fun-Time XI will have been hugely encouraging for the player, for Liverpool fans and, well, for anyone who likes to see a once-broken player get back to their best.

In fact, this Ox renaissance is coming along rather nicely. After missing almost all of 2018–19 with injury, the midfielder has now scored five goals in his past six games. To put that into perspective, his best tally in a season since his League One days is six.

Oxlade-Chamberlain tore pretty much every muscle it’s possible to tear in his right leg. The only explanation for his sudden propensity for scoring screamers is that the surgeons didn’t just fix things in that leg, they gave him a new one – and one with a traction engine attached to the end of it.

Indeed, his goal against Montenegro might actually be his least interesting one yet: all three of his Champions League strikes against Genk were brilliant, as was his thunderbolt against Arsenal in the Carabao.

How many more spectacular Ox goals will we get this season?

At the moment, it’s slightly easier to see where Oxlade-Chamberlain fits in for England than for Liverpool.

Jurgen Klopp obviously knows what he is doing, but the German favours his more defensive-minded midfielders to protect his potent attackers — the ones up front and the ones at full-back.

So while Henderson, Milner, Fabinho and Wijnaldum rack up the minutes for Liverpool in fixtures large and small, the Ox finds himself among a group of attacking midfielders whom Klopp calls upon only when needed.

Adam Lallana and Xherdan Shaqiri complete the ‘Plan B’ gang.

That’s not to say Oxlade-Chamberlain won’t continue to make his mark on Merseyside, though. With the club’s fixture list about to get very silly, the reborn midfielder will certainly get to add to his collection of screamers, both in the club’s many, many cup competitions and in the league.

And the way things are going, you wouldn’t bet against the England star finding the net against, let’s say, Hienghène Sport, the reigning champions of Oceana.

But it’s in this newly swashbuckling England side, an absurdly reckless XI where the question isn’t ‘Gerrard, Lampard or Scholes?’ but ‘Can we make the opponent score a comedy own goal out of pure fear?’, where the Ox can really come into his own.

Will he make an All-Time XI after England’s 2,000th fixture? Possibly not, but seeing him reach his full potential is going to be brilliant fun.