Alexander Isak, the sting in Sweden’s tail, & a display to make Arsenal drool 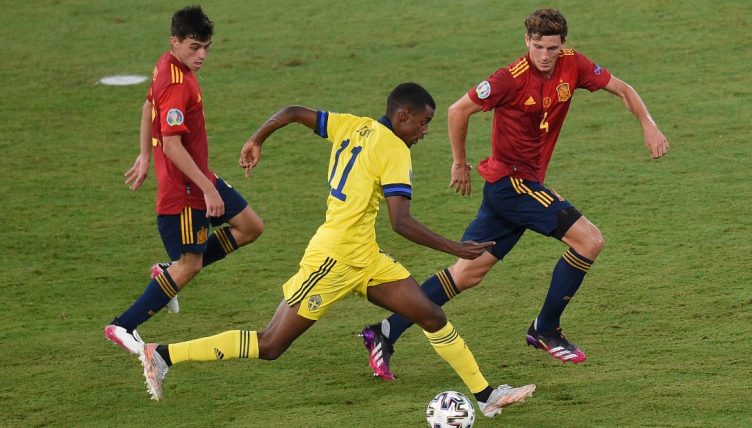 Spain kicked off their Euro 2020 campaign where they left off in tournament football – in self-parody mode. They could only draw 0-0 with Sweden in spite of registering 85% possession. Yes, you read that right, eighty-five per cent possession.

Just as they’d done in the Luzhniki Stadium three years ago in their round of 16 elimination to 2018 World Cup hosts Russia, Spain suffocated the opposition, dominating the ball and territory, but lacked the sharpness in the final third to convert that into goals.

You might think that such a contest isn’t fertile ground for showcasing one of Europe’s brightest young talents, but you’d be wrong. Pedri, Ferran Torres and Dani Olmo all had their moments for Spain, but it was Sweden’s Alexander Isak that shone brightest in Seville.

Arsenal-linked striker Isak had been earmarked as one to watch in all of the pre-tournament previews, and it’s easy to see why. The Real Sociedad forward made a cornered animal look capable of winning the fight. He was the sting in Sweden’s tail.

Sweden coach Janne Andersson made no apologies for his side’s defensive approach in the punishing heat of Seville: “If you come here and play Spain in 32-degree heat and think you’re going to outplay them, you’re totally naive. I’m not at all ashamed of this point. If we want to take points from these types of teams, we have to play this way.”

The passive approach resulted in Sweden’s tireless front two – Isak alongside Krasnodar veteran Marcus Berg – left with a thankless task up top, spending long spells of the match as isolated spectators. They lasted until the 69th minute, making six and eight passes respectively.

To put that in context, Spain’s midfield duo Pedri and Koke completed 200 passes between them, while PSG winger Pablo Sarabia – who wasn’t introduced until the 66th minute – registered more touches than both.

In spite of being left to feed on scraps, Isak was pivotal for Sweden – with all of their 14.9% possession – creating some of the best opportunities to score at the Estadio La Cartuja.

On the biggest stage of his career to date, he showed how he managed to score 17 goals in La Liga in 2020-21 and became the youngest player since Ronaldo Nazario to score in seven successive games in the competition.

The 21-year-old didn’t shirk his responsibilities, always pressing Spain’s backline as they invariably passed the ball sideways, while making runs and providing an out-ball in the rare moments his team-mates had the means to find him. When he had the ball in a dangerous area, Spain couldn’t handle him.

Luis Enrique’s men had a warning of the threat Isak posed shortly before half-time, when he managed to get in behind before sending Aymeric Laporte to the floor before his goal-bound shot was deflected onto the post. Give the kid an inch, and that’s what he can do.

But Isak’s finest moment came just after the hour mark, in which he carried the ball into Spain’s penalty area but looked to have been crowded out by three covering defenders.

Rather than take a leaf out of his opponents’ book by turning back and recycling possession into a non-threatening area, the striker demonstrated his fearlessness by utilising his quick footwork to turn out of the crowd of Roja shirts – leaving two of the three in his dust – and darted straight towards the six-yard box, squaring the ball into the path of his strike partner.

But Berg was unable to convert. Having failed to set himself, the ball hit the No.9’s body and ricocheted out of play.

🇸🇪 This would have been a GREAT goal (if Marcus Berg put it away).

The day before, Kalvin Phillips received plaudits across Europe for how he performed in England’s 1-0 victory over Croatia, producing the match’s decisive moment by playing in a key pass for Raheem Sterling. Fortunately for Phillips, Sterling was able to finish – and in doing so, sewed up the biggest day of the Leeds United midfielder’s career to date.

Unfortunately for Isak, his team-mate was unable to do the same for him, denying him a moment in which Europe would have sat up and taken notice of one of the most promising young talents at the tournament. But that was no fault of his own, and it wouldn’t have mattered to the throng of scouts watching on – from Liverpool to Real Madrid to Arsenal and beyond, there won’t be a recruitment department around unaware of his frightening potential.

The decision to substitute Isak a few minutes later raised plenty of eyebrows, given he was by far Sweden’s most dangerous player, but he’d run his socks off for 70 minutes in mid-June in Europe’s hottest city.

It made sense that Andersson wanted to keep Isak’s powder dry. There’s plenty more to come, in both the coming weeks and years.

Can you name every PFA Young Player of the Year in the Premier League era?