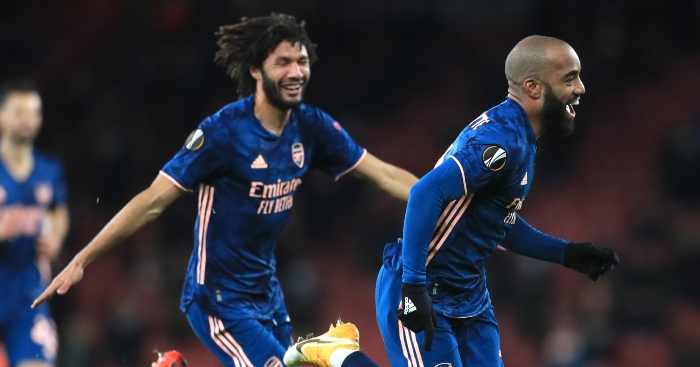 Arsenal haven’t had the best of times recently, and Alexandre Lacazette has been one of their most maligned players.

The former Lyon striker had scored in each of Arsenal’s first three Premier League games of the season but had faded into the background, having failed to convert in any of the seven matches following that spell of prolificacy.

With Eddie Nketiah knocking on the door to take his place, it was important the 29-year-old offered Mikel Arteta an indication of what he is capable of in front of goal.

He certainly did that with his strike in the Gunners’ 4-1 victory over Rapid Vienna in the Europa League group stages.

The win means Arsenal have taken all 15 points on offer from their five Europa League matches, and are guaranteed to qualify top of their group.

Lacazette started off the dominant performance from the team in red and white, as he managed to get hold of the loose ball, took a touch out of his feet and hit a strike that completely bamboozled Richard Strebinger in the Rapid Vienna goal.

The swerve on that Lacazette strike! 🌪🤯

A great first goal back in front of the Arsenal fans 👏 pic.twitter.com/1NPJoM7N5R

The 2000 or so Arsenal fans allowed into The Emirates might not have been able to produce the kind of roar a thunderbastard like that deserves, but it’s still a damn sight better than no fans at all.

It’s good timing too. Those fans that have been starved of proper live football for the past nine months didn’t return for the recent defeats at home to Leicester, Aston Villa or Wolves.

Instead after just ten minutes they were treated to one of the most satisfying sights in football. A striker seeing an oppurtunity to just absolutely leather it from just outside the box, and doing exactly that to send it past a helpless keeper.

Lacazette’s aforementioned poor form in front of goal has meant that he’s struggled for game time recently, staying on the bench against Leeds United and getting just nine minutes against Wolves.

However, Joe Willock has shown that encouraging Europa League performances can be enough to get into Arteta’s good books, with the 21-year-old rewarded with starts in the league against Leeds and Wolves.

Having scored the opener in such an eye-catching fashion, Lacazette will be hoping he’s done enough to force Arteta’s hand, especially when they’ve looked even more goal-shy in his absence.

Whatever the Spaniard opts to do, Lacazette can now laugh in the face of anyone who says he can’t finish.