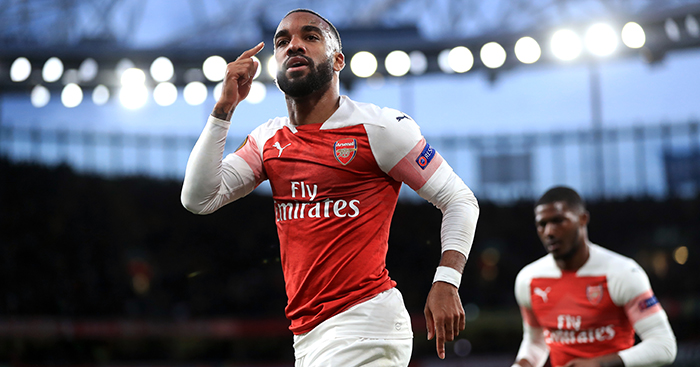 Although dark forces prevented him from getting a hat-trick, Alexandre Lacazette was a class above against Valencia. He could win the Europa League for Arsenal.

Every player has those days. Those games where, even though you’ve done everything right, something conspires to stop you scoring.

Maybe the opposition keeper is having the game of his life. Or your team-mates just can’t pick you out when you find space. Perhaps a big bastard like Sead Kolasinac just runs into you for some reason.

Against Valencia, Alexandre Lacazette had one of those games. Chance after chance came his way, and, despite doing virtually nothing wrong, the striker couldn’t find that precious goal.

There was some consolation: Lacazette had already scored twice and absolutely bossed the match by the time fortune deserted him. He was evidently playing under a curse but still emerged as the game’s standout player.

It’s a testament to how easy he seems to find the big games.

His multiple thwarted attempts and curious header at thin air should have been elements of a YouTube fails compilation or, at the very least, ripe pickings for the ‘No Context Arsenal’ Twitter account.

Instead, the Frenchman’s bad luck in the second half underscored how much he was dominating the match, how his two goals could have been four or five.

If Lacazette can prosper even when lady luck smiles on the opposition, Arsenal can expect big things from this Europa League campaign.

It was just seven minutes after Valencia’s opener that Lacazette orchestrated an equaliser, in which the forward perfected the rare art of assisting and scoring the same goal.

Yes, Pierre-Emerick Aubameyang did some fine work in between, but it was Lacazette’s laser-focused through ball that created the opportunity and his ice-cool strike that finished it.

It was a clear sign that the game would be, for the most part, about one man.

But when the Frenchman put Arsenal 2-1 up just eight minutes later, we realised that the gods of fortune were at least trying to ruin Lacazette’s night.

We just weren’t yet to know that the Arsenal man would beat them.

For a split second, it genuinely looked like misfortune was going to deny the striker his goal. But misfortune forgot about goal-line technology, allowing Lacazette to prevail.

And then fate really doubled down.

During the second half, Lacazette had three chance to complete his hat-trick. For mysterious reasons, however, he couldn’t take any of them, and it looked as though luck would favour Valencia going into the second leg.

Case in point: in the 63rd minute, Aubameyang put in a perfect cross, only for his strike partner — at this point very much cursed — to throw himself at a ghost ball, not at the highly suspect Europa League matchball, which is made by a possibly non-existent brand called ‘Molten’.

But the No.9 couldn’t find a way past either Neto or, serendipitously, Arsenal’s previous most handsome player, Gabriel Paulista.

“I had two good balls from my team-mates, so… ‘thank you’ to them,” Lacazette said after the game. “I could have scored a third one to be better for the team, but unfortunately I didn’t.”

It really was a bad day at the office.

Unfortunately for Valencia, who sold their suntanned, orange-eating souls to the devil to stop Lacazette getting a hat-trick, the curse was limited in scope, which meant the Frenchman’s best pal, Aubamayang, was free to seal the tie.

That’s 25 goals for the Gabonese this season and 18 for the Frenchman.

But if Arsenal fans are looking for a small negative to take from the performance, it might be that Lacazette — who has found the net against Napoli, Chelsea, Spurs and Liverpool this season — isn’t scoring hatfuls of goals against teams like Everton and Crystal Palace, who are a) not very good and b) not employing the literal dark arts to prevent him from scoring.

That, however, would be a pedantic quibble, given the overall brilliance of Arsenal’s new man for the big occasions.

“We want to win and go into the Champions League next season,” Lacazette said in his post-match interview.

If he can be the best player on the pitch despite everything going against him, despite throwing himself at empty space, despite being thwarted by Gabriel of all fucking people, then he and Arsenal have a great chance of pulling it off.